Shakespeare and His Sisters on Site, working closely with Penshurst Place, look at the parallels between plays by Shakespeare and two women writers of the Sidney household, the Countess of Pembroke and her niece, Lady Mary Wroth.

On 16 September 2018 Dramatizing Penshurst staged the first professional production of Lady Mary Wroth’s play Love’s Victory (1617-21) in Baron’s Hall at Penshurst Place, funded by a grant from the Arts and Humanities Research Council. 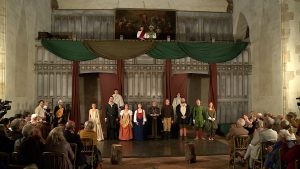 Filmed extracts from the rehearsal process with actors working in the gardens and Baron’s Hall have been uploaded to the website. The live performance in Baron’s Hall has also been filmed and ready for free public release since December 2018.

Sadly, and ironically, these recordings are currently subject to exactly the same kind of male censorship as that which plagued Lady Mary Wroth 400 years ago in 1621 when Edward Denny claimed that her publication of an ‘Idle Book’ would damage his reputation. As a result, we will be re-staging and re-filming the play on 27 September 2022 as part of an academic conference The Sidneys of Penshurst and Beyond: Connections, Contexts and Collaborations

Nichole Bird and Anne-Marie Piazza rehearsing at The Stage Garden

Andrew Hodge and Jonny McPhearson in the Grey and White Garden

Andrew Hodge and Jonny McPhearson in the Grey and White Garden

The manuscripts of ‘Love’s Victory’

Shakespeare and His Sisters on Site has engaged with local communities including tutors and members of the Kent Adult Education groups and courses run at Sevenoaks (directed by Marta Doran) have begun to explore the Sidneys of Penshurst.

Special thanks to Lord and Lady De L’Isle and their son Philip, to Ben, Nikki and all the staff at Penshurst Place and to Ray and Mary for their help to Professor Findlay. 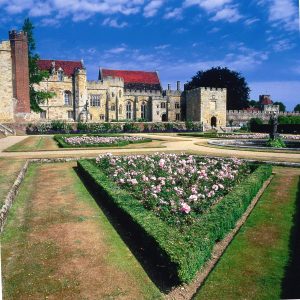