Students at Archbishop’s School, Canterbury, compared Shakespeare’s Hamlet to Love’s Victory (c.1618) by his female contemporary, Lady Mary Wroth, in order to investigate how attitudes to paternal control and the supernatural might differ from those presented in Hamlet.

Shakespeare’s tragic hero Hamlet and Lady Mary Wroth’s romantic heroine Musella live both under the burden of commands from their dead fathers. Hamlet’s ghostly father incites his son to avenge his murder. Musella’s dead father’s will insists she marry the shepherd Rustic rather than her beloved Philisses.

While the ghost in Hamlet drives the plot towards tragedy, Wroth’s tragicomedy uses the goddess Venus to turn the plot away from death. Students in Miss J. Creaney’s group compared the supernatural characters in the two plays.

In contrast to the ghost in Hamlet who comes from underneath the stage, Wroth’s powerful female deity and her son, Cupid, appear ‘in the clowds,’ indicating an upper stage position (as was conventional for the gods in early modern theatres). They spoke from the minstrel’s gallery in a staged reading at Penshurst Place.

Students chose a range of techniques to dramatize her spatial dominance over her son in the classroom. 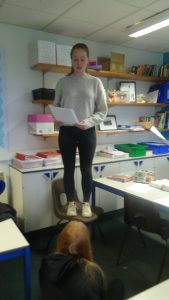 In contrast to Venus’s verbal and all-seeing power, her son Cupid is blinded until she demands he remove his scarf. 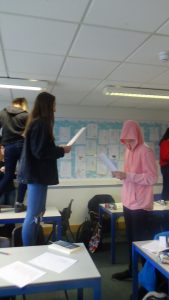 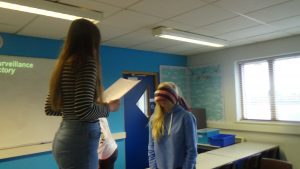