We’ve all seen plays in different venues, how can the performance venue affect the way we enjoy it?

We helped perform Shakespeare inside a prison at Lancaster Castle, in contrast we performed sections of Lady Mary Wroth’s Love’s Victory within the house and gardens of Penshurst Place that were once her home. Over two days we explored the questions how different and / or important is it to express feelings of love? How were love stories made in the romantic setting of Penshurst Place in the seventeenth century? Should we conceal how we feel or shout it to the world? And where’s the best place to do that?

We went on a journey around the house and gardens to find answers to these questions, with a workshop staging an exchange between Venus and her mischievous son, Cupid. Visitors were invited to watch director Martin Hodgson and professional actors (Frances Marshall and Craig Hamlyn) work on getting love our into the open by staging the confessions of Wroth’s romantic hero, secretly overheard by Wroth’s heroine.

Professor Alison Findlay’s talk, which began the great adventure around Penshurst Place, is available in full on our Youtube. 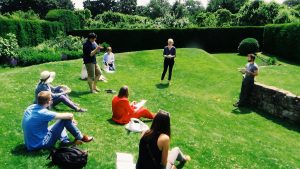 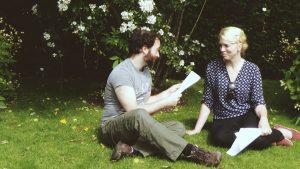 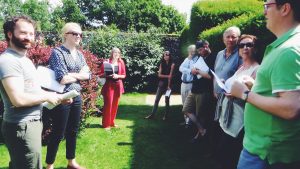 Below are sections from the feedback forms kindly completed by members of the workshop expressing particular highlights and suggestions:

After viewing the performances of the script inside and outside, which did you think was most effective and why?
Outside due to the atmosphere and felt more involved

In The Hall with the elevation of Venus and Cupid being down and able to connect with the audience ie. Venus Godly and Cupid interacting with mortals

Acoustics slightly difficult at Diana’s Bath and possibly too enclosed in The Stage Garden. It would be great for the production to have a mixture of both indoor and outdoor venues as the style of the garden could provide some lovely settings

Inside due to the concentration being better at this stage and listening to every word was easier, this set the scene well

Moving for every scene would require too much adjustment, performing in the Barons Hall would work well but one scene outside, e.g. at the end would be memorable if a fairly intimate environment is chosen

In the Barons Hall with Venus above and Cupid below — this worked well, particularly as Cupid could interact with the audience, which added to the audience’s understanding of the text. 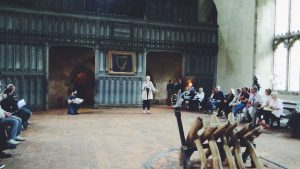 Were any of the actors’ positions in the acting space, movements or gestures particularly effective?
Kisses in the Orchard – even falling over!

The angles of the actors are important so their backs are not turned away from the audience, the actors were aware of this and used the spaces well

Cupid “threatening” with his arrows

Venus’ gestures in The Hall, from The Minstrels’ Gallery, had impact, as did Cupid’s movements towards the audience, giving involvement early on in the play

Were there any variations in pace or volume (whispering, calling out, anger) that you thought were effective?
Venus delivering her speech angrily set the scene and made Cupid react more effectively

Did you feel as if you were included in the scene or lines at any point in the exchange in any of the settings?
Involved — particularly in Orchard

Yes, we felt included in the dialogue and The Hall made us feel part of the “acting” in that we felt we needed to recoil/bow, etc

I like the idea of being part of the environment the actors are engaged in, but there is also the historical aspect of reenacting how the play was originally performed

“I really enjoyed this opportunity. Great admiration for all! Thank you”
“We wish you the best of luck, and hope to see the finished product”
“Please keep in touch”
“Please contact me to see the production” 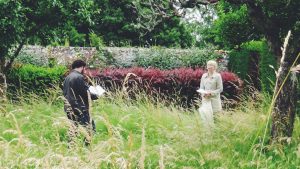 Musella approaches Philisses in the Orchard