The experience of being hopelessly in love has been captured in English sonnets for over 400 years, but mostly from a male perspective. Lady Mary Wroth is an early, rare exception to this rule, having written a sequence of sonnets entitled Pamphilia to Amphilanthus, which puts the woman (Pamphilia’s) experience first.  Wroth’s uncle, Sir Philip Sidney, had popularized the sonnet form so her choice of sonnets to express her heroine’s feelings is not unusual. What is amazing, however, is the frankness with which she expresses female desire. Writing love poetry breached the conventional boundaries of female modesty on two counts: writing was a masculine activity and early modern etiquette dictated that women impassioned with love had to suffer in silence. The sense of feeling trapped is abundantly clear in ‘A Crown of Sonnets Dedicated to Love’ which forms one section of Wroth’s sonnet sequence.  It begins

In this strange labyrinth how shall I turn?

Ways are on all sides while the way I miss.

If to the right hand, there, in love I burn;

The image of being lost in a dangerous labyrinth of love is common in sonnets. Philip Sidney had claimed ‘I have entered the labyrinth from which I see no escape’ (Sonnet  102), for example. Many Elizabethan formal gardens had mazes or labyrinths (usually planted with box hedges) as forms of entertainment, similar to the maize maze at Penshurst Place, Wroth’s family home. 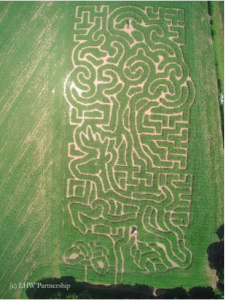 The origins of the maze go back to the myth of Theseus being rescued by Ariadne who gives him a golden thread to lead him out of the Minotaur’s labyrinth. In Wroth’s Crown of Sonnets, however, the maze provides a perfect metaphor for the suffocation of her own desires by the early modern conventions that silenced women.  Her heroine Pamphilia dare not tell Amphilanthus that she loves him. Nevertheless, she cannot escape her feelings: she vows to ‘leave all, and take the thread of Love.’ The structure of the ‘Crown of sonnets’ recreates the maze experience of feeling trapped: the last line of each of the twelve sonnets forms the first line of the next sonnet, with the final sonnet circling back to the beginning as it ends with the question

So though in love I fervently do burn,

In this strange labyrinth how shall I turn?’