Els Van Den Steen’s students have worked on individual pages for the ‘Book of Fortunes,’ a crucial prop in Lady Mary Wroth’s play Love’s Victory (1617). The shepherd and shepherdess characters take it in turn to choose verses from the book which tell their ‘fortunes’ in love. This game of choosing fortunes from a book was popular on the continent, where Wroth and her family spent time. Calligraphy students transcribed these early versions of horoscopes from the play alongside other contemporary lyrics on love and fortune, using an early modern Italic hand like that of Lady Mary Wroth in her manuscripts.

The course is officially held at Kent Adult Education Centre in Sevenoaks and Maidstone. Els Van Den Steen will visit Penshurst Place on April 17th to showcase the work of her students to Professor Alison Findlay and students of Simon Langton Girls’ Grammar School who are working on Lady Mary Wroth’s Love’s Victory.

In total fifteen of Els’s Adult Education students have each written a text for the Book of Fortunes: ten from her Sevenoaks classes and five from her Maidstone classes. Els Van Den Steen’s regional Kent-based calligraphy group, the Cinque Ports Scribes, will also be write some additional calligraphy (riddles and songs).

For the Book of Fortunes Els’s students were inspired by the Italic hand of the Italian writing masters from the 16th century: Arrighi, Tagliente and Palatino. This is also the hand that influenced the writing in England at the time Lady Mary Wroth wrote her play Love’s Victory. As the quill was the writing tool used during the Renaissance, they also incorporated some quill cutting during the lessons. 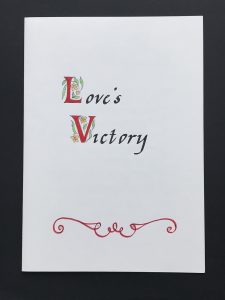 The Book of Fortunes in the play draws on a tradition of lyrics relating love and fortune, such as the Deveonshire Manuscript Poem (c. 1530s and early 1540s)

what erthelye thing more can I crave
what wolde I wishe more at my will
no thing on erthe more wold I have
save that I have to have it still. 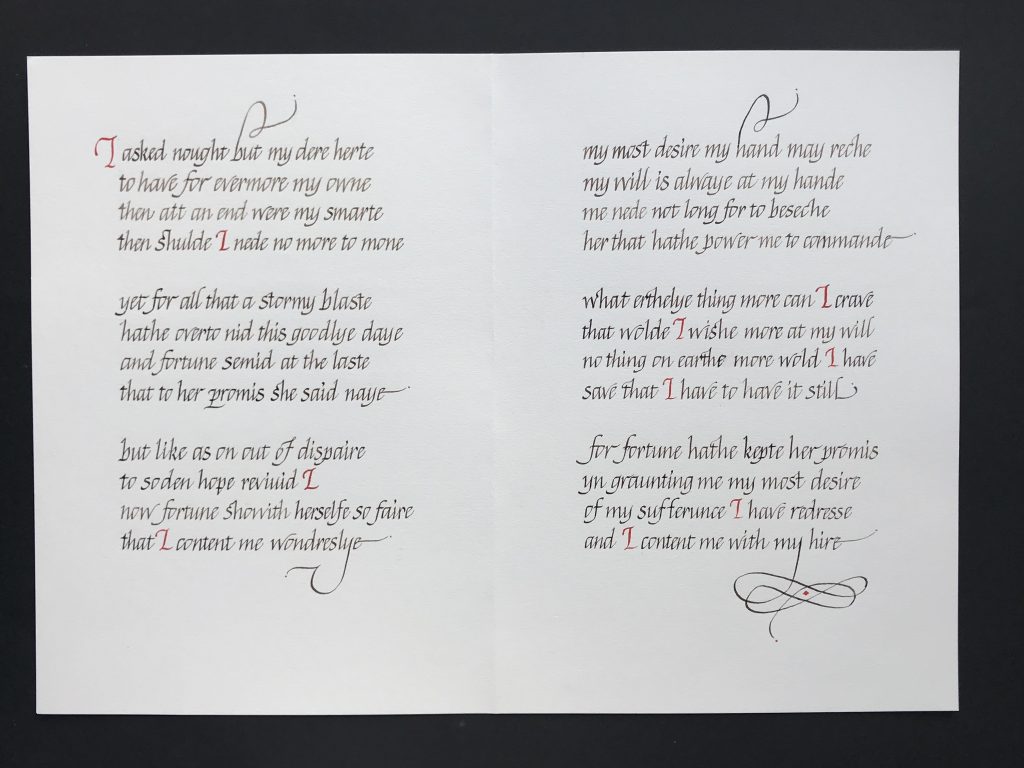 For flatterers seeke where fortune dooeth dwell,
And whan that she lowreth, thei bid theim farewell.
The poore doeth theim curse as ofte as thei want.
In hauyng so muche to make it so scant.
Their children sometymes doo wisshe theim in graue,
That thei myght possesse that rychesse thei haue.
And that whiche thei wyn with trauayle and stryfe,
Oftentymes (as we see) doeth coste theim their life.
Lo these bee the fruites that rychesse bryngeth foorth,
With many other mo, whiche be no more woorth.
For moneie is cause of murder and thefte,
Of batayle and bloudshed, whiche wold god wer left,
Of rauine, of wronge, of false wytuesse bearyng,
Of treason conspired, and eke of forswearyng.
And for to be shorte and knyt vp the knot,
Fewe mischieves at all that monie maketh not.

Reprinted in John Hall, Certayne Chapters of the Proverbes of Solomon drawen into meter by Thomas Sternholde, late grome of the kynges Magesties robes (1550) 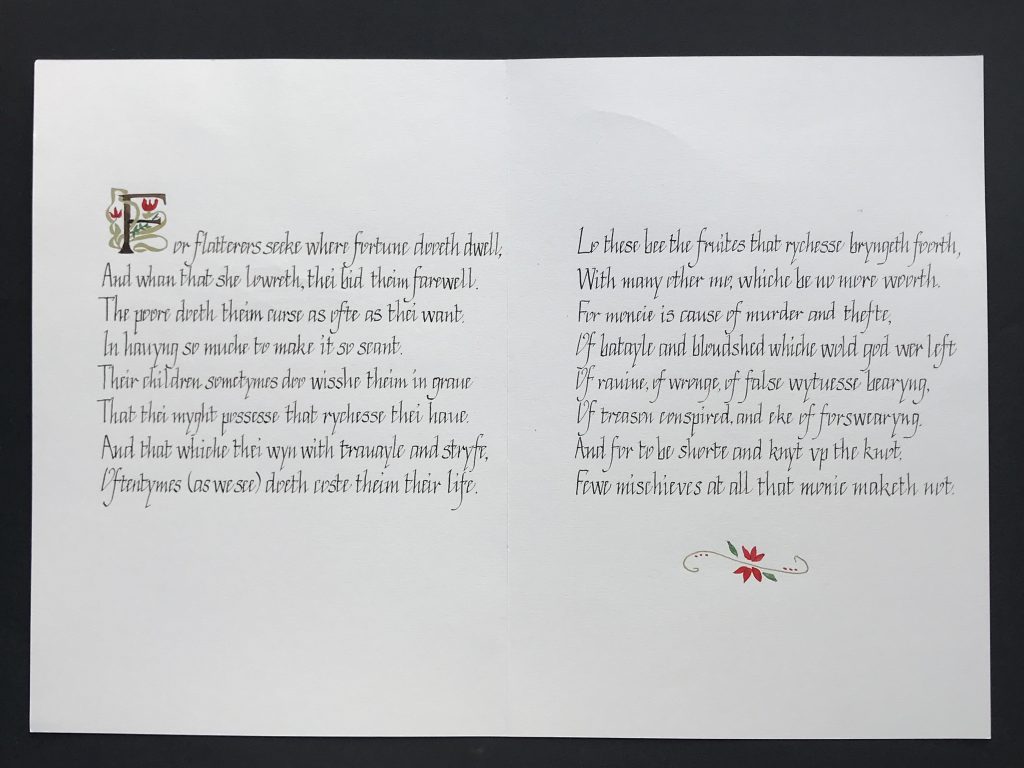 GO, pytyous hart, rasyd with dedly wo,
Persyd with payn, bleding with wondes smart,
Bewayle thy fortune, with vaynys wan and blo.
O Fortune vnfrendly, Fortune vnkynde thow art,
To be so cruell and so ouerthwart,
To suffer me so carefull to endure,
That wher I loue best I dare not dyscure !
One there is, and euer one shalbe,
For whose sake my hart is sore dyseasyd ;
For whose loue, welcom dysease to me !
I am content so all partys be pleasyd :
Yet, and God wold, I wold my payne were easyd !
But Fortune enforsyth me so carefully to endure,
That where I loue best I dare not dyscure 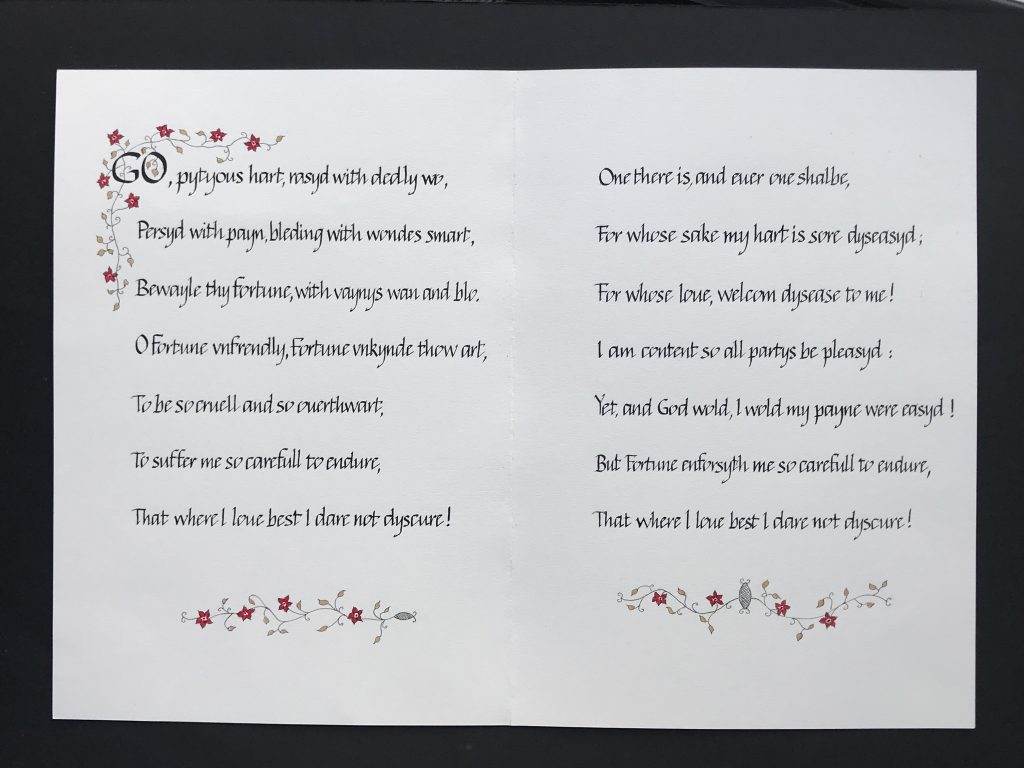 Father: There ben truantes in suche a wyse
That lacken hert, whan best were
They speken of loue, and right for feare
They waxen dombe, and dare not telle
without sowne, as dothe the belle
whiche hath no clapper for to chyme
And ryght so they, as for the tyme
Ben herteles without speche
Of loue, and dare nothynge eseche
And thus they lese, and wynne nought

Son: My father I am all beknowe
That I haue ben one of the slowe
As for to telle in loues cas
Myn herte is yet, and euer was
Although the worlde shuld al to breke
So fearful, that I dare not speke
Of what purpose that I haue nome
whan I towarde my lady come
But lette it passe and ouer go

Father: My sonne do no more so
For after that a man pursueth
To loue so fortune seweth
Ful ofte, and yeueth her happy chance
To hym, whiche maketh continuance
To preye loue, and to beseche
As by ensample I shall the teche. 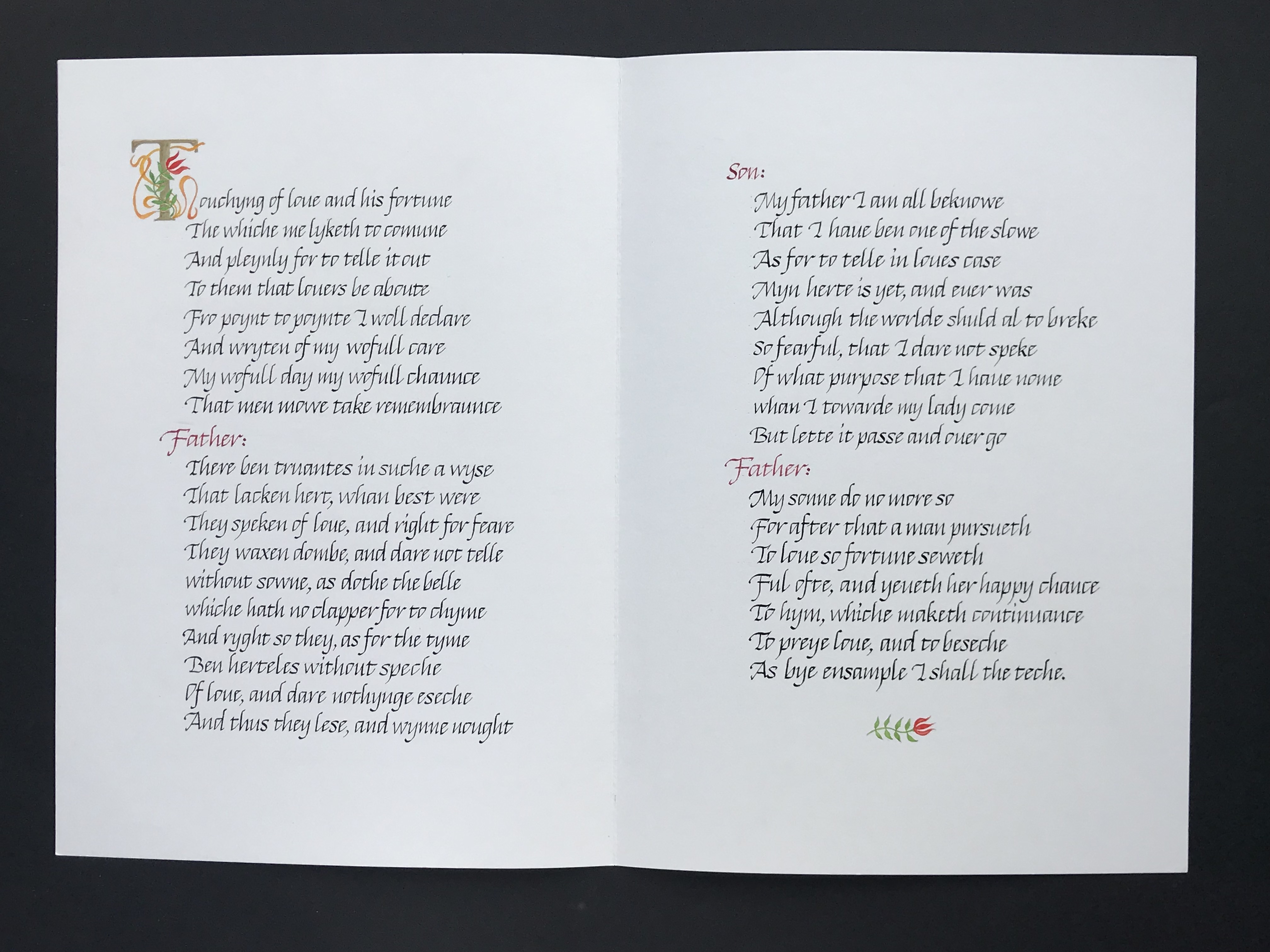 Els Van Den Steen has taught calligraphy in Adult Education for more than 15 years. She is a member of the Cinque Ports Scribes and she exhibits her work with this group. She gained a CLAS Diploma of Calligraphy in 1997.