April and May 1915 saw 121 Lancastrians killed, making them the worst two months of the War for the town. Most of these deaths were associated with the Second Battle of Ypres (22nd April to 25th May) and 90 of the deaths were from the 1st/5th Battalion of the King’s Own Royal Lancaster Regiment. The Gallipoli Campaign also started in April 1915, however, while Gallipoli features prominently in popular memory of the War it only killed four Lancastrians in this period. This makes for a stark contrast with Second Ypres, which is all but forgotten by most history books. 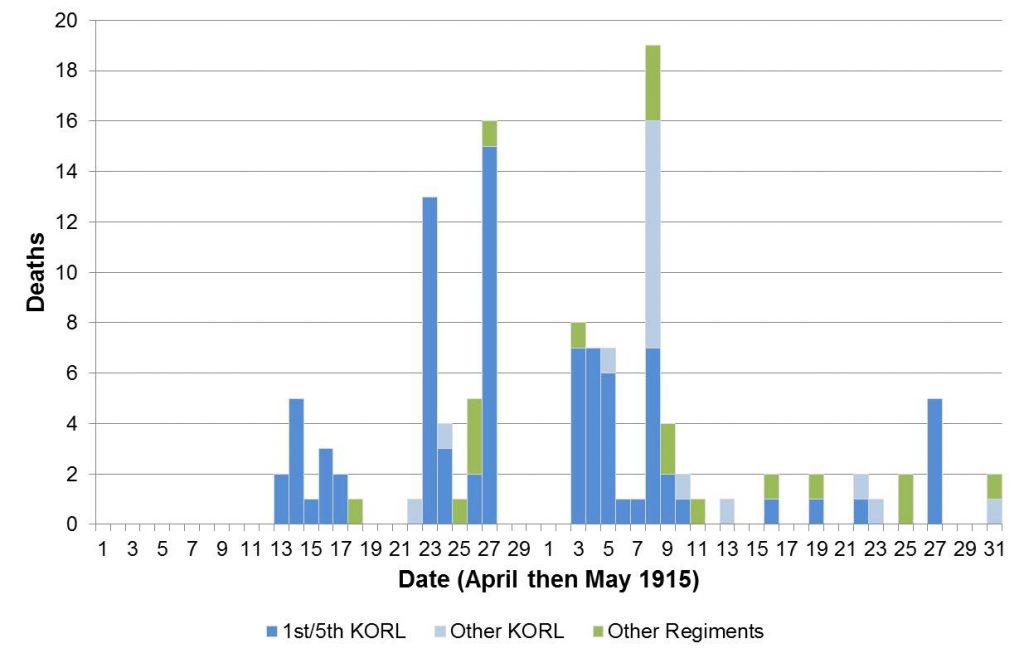 The graph above shows the number of Lancastrians killed by day over April and May (KORL stands for King’s Own Royal Lancaster Regiment). The deaths fall into five main periods as described below. The locations of the events are shown on the map below. The quotes are taken from Hodgkinson’s history of the 1st/5th and are frequently from the diary of the battalion’s commanding officer, Colonel Lord Richard Cavendish. 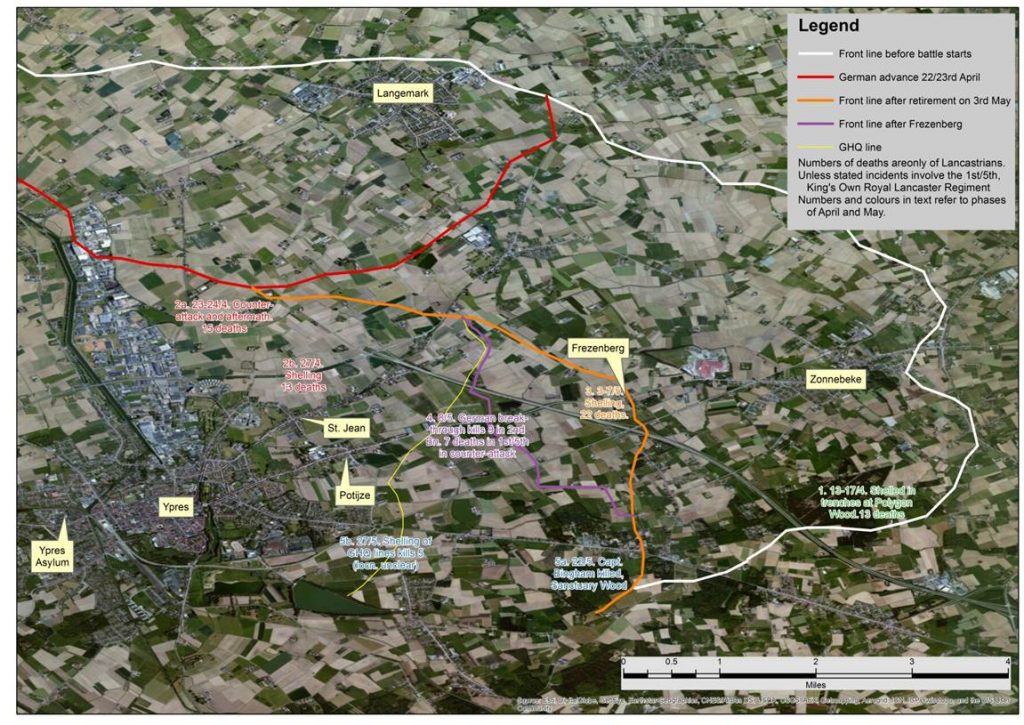 In the lead-up to the battle, and unaware of what was to follow, the 1st/5th took over trenches in the Zonnebeke/Polygon Wood area. These trenches had previously been occupied by the French and, it is claimed that they needed considerable improvement. As the German lines were between 10 and 200 yards away and they were under heavy shell-fire for much of the time this resulted in heavy casualties. “17th—Relived by 3rd Monmouths. Returned to billets—Lunatic Asylum, Ypres. Our total casualties for the four days were 14 killed or died of wounds and 44 wounded. Three men’s nerves went and George (Medical Officer) fears that two may be permanently mad. The men are very cheerful…” Of the 14 Lancastrians killed in this period, 13 were with the 1st/5th, the other, Richard Smith of 5 Bank Road, Skerton, was killed nearby with the Duke of Wellington’s Regiment. His brother Jack was with the 1st/5th and was wounded around this time.

The battle began with a German gas attack near Langemark. The 1st/5th was somewhere north of St. Jean when “We then realised that something quite serious had happened as one or two French soldiers and Zouvaves [French colonial troops] came straggling back, obviously panic stricken, not wounded, but suffering terribly and quite incoherent.” On the 23rd the 1st/5th was involved in a hastily organised counter-attack. This failed but resulted in the deaths of three officers and 23 men, with a further four officers and 99 men wounded. Thirteen of the dead were Lancastrians. “I was pleased with the way our fellows went ahead continually meeting a stream of wounded going to the rear and the ground littered with dead. … For 600 yards it was simply damnable, and it was a wonder anybody got though at all. There was one field with heaps of manure in rows. A lot of fellows thought that they could take shelter behind them. They are, of course not bullet-proof, and there was hardly a heap without a dead or wounded man beside it.”

They were then relieved but spent several days near Potijze under shell-fire. Another counter-attack was planned for the 27th but did not materialise, however, “We were just taking up our position when one of the large shells exploded bang in the middle of a platoon of ‘B’ Company, killing eight, two of whom were blown to atoms and wounding two more. … April 29th … The big shell which burst in the middle of ‘B’ Company was much worse than we thought, and we found five bodies making thirteen in all. They were blown over a hedge.” Fifteen Lancastrians died on the 27th, one of the worst days of the whole War. Many of them would have been killed by that one shell.

By the time the battalion was moved back to Valmertinghe (2.5 miles west of Ypres) on the 29th they had lost 380 of the 1,020 men they had come from England with.

On the 2nd May the 1st/5th moved back into the Ypres Salient to reserve trenches at Frezenberg. A tactical withdrawal on the 4th May led to these trenches becoming the front line. The tone used in the colonel’s diary reveals how grim these days were:

22 of these deaths were Lancastrians, two more Lancastrians were killed nearby with the 2nd Battalion, King’s Own and the Royal Fusiliers resepectively.

Having been relieved by the King’s Own’s 2nd Battalion, the 1st/5th was put in reserve in the GHQ trenches a mile or two behind the front line. The 8th May saw 19 Lancastrians killed in a single day making it, along with 25th Sept 1915, Lancaster’s worst day of the War. This was when the Germans launched their last major assault of Second Ypres at Frezenberg. “About 12 Major Clough and about 40 men of the 2nd Battalion came in and told us that the Germans had attacked that morning in overwhelming strength and had taken the trenches, and that they were the only survivors of the Battalion.” While Major Clough may have overstated the losses, over 300 men from the 2nd Battalion were killed that day. The 1st/5th was then part of a counter-attack which, like the previous one, failed with heavy casualties, including Colonel Cavendish who was wounded.

That day saw nineteen Lancastrians killed, including seven from the 1st/5th and nine from the 2nd Battalion. In many ways, however, Lancaster was lucky that day. Over the course of Second Ypres around two of every three men killed in the 1st/5th were Lancastrians. 300 men from the 2nd Battalion were killed on the 8th May in a position that had been occupied by the 1st/5th a few days previously. Had the 1st/5th been in that position it is fair to assume that of those 300 deaths would have resulted in 200 Lancastrians dying in a single day. Losses of this scale did happen in other towns, fortunately Lancaster was spared.

After the battle, the 1st/5th remained in the Ypres area and the losses continued.  Someof these were people who died of wounds received earlier in the battle but there were also new casualties. On the 22nd , Captain Frank Bingham,  who had just returned from leave and who lived in Highfield House near the Ashton Memorial, was killed by a sniper while reconnoitring new positions near Sanctuary Wood. The memorial to him, shown above, is still in place near the main entrance to the Old Building at Lancaster Royal Infirmary. On the 27th five Lancastrians were killed when a shell hit a dug out housing some of the 1st/5th‘s senior NCOs.

Further reading on the Second Battle of Ypres: