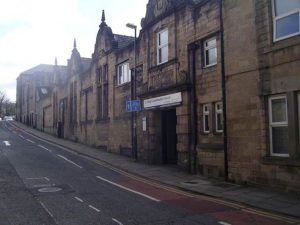 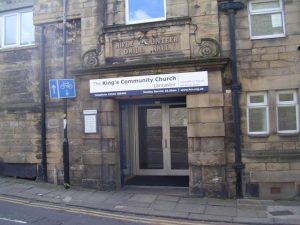 The 1st/5th was one of the King’s Own Royal Lancaster Regiment’s Territorial Force battalions. It was thus a battalion of part-time soldiers, the equivalent of the modern Territorial Army. Its headquarters, which still survive (see photographs) were on Phoenix Street. The battalion recruited heavily from Lancaster and many of the men who joined up early in the war joined it. It suffered its first Lancastrian casualty before it even arrived in France, when John John Huartson (aka John Hewartson) of 14 Albion Street and 23 Ridge Street, was hit by a train while guarding the Great Western Railway near Swindon in 1914.

The battalion arrived in Le Harve on the 15th Feb 1915 with 36 officers and 1,026 men. It was introduced to trench warfare between Wulverghem and Neuve Eglise in early March. Its first man to be killed in action was a Private W Walls, killed on the 6th March. He was not from Lancaster but was followed on the 11th by Thomas Hartley from 21 Edward Street, one of 20 deaths on that street during the War. Two days later, Hugh Rourke was killed. He was one of 15 people from Green Street, Bulk to be killed and left a wife and four children. At the end of March, two more Lancastrians were killed, Charles Stirzaker of 47 Ullswater Road and J T Ismay of 13 Dyehouse Lane. His foster mother’s son, John Pye, was also in the 1st/5th and was to be killed at Second Ypres on 27th April.

On the 31st March the battalion was relieved. It has suffered eight deaths from enemy action, one from disease and eighteen wounded. On April 9th the battalion marched to Ypres where its experience would make these early losses seem very light.