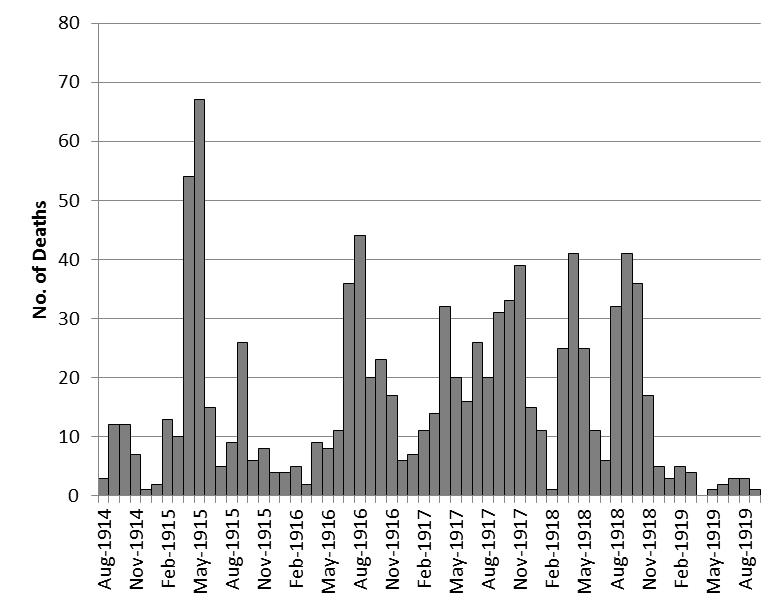 The graph above shows the number of deaths among Lancastrians in each month of the War (which ended in November 1918) and the few months afterwards. The worst period of the War was April and May 1915 when 121 Lancastrians died, 54 in April and 67 in May. The majority of these deaths were at the Second Battle of Ypres, 89 of them were in the 1st/5th Battalion of the King’s Own Royal Lancaster Regiment, a territorial battalion (similar to the modern Territorial Army) which recruited heavily in Lancaster and whose headquarters were on Phoenix Street. They had only recently arrived in France and this was their first experience of serious fighting. Three other months had more than 40 deaths: August 1916 during the Somme Campaign, April 1918 during the German Spring Offensive, and Sept 1918 during the Allied Counter-Offensive that finally broke German resistance.

The worst days of the War were the 8th May 1915 and the 25th Sept 1915. The 8th May was during the Second Battle of Ypres and occurred when the Germans attacked the 2nd Battalion at Frezenberg and the 1st/5th subsequently counter-attacked. The 25th of September casualties were mainly at the Battle of Loos, Britain’s first attempt at a major attack. Most of the deaths were with the 8th Battalion of the Seaforth Highlanders. The third worst day was the 27th April 1915 when 16 men died, mainly as a result of the 1st/5th being heavily shelled during Second Ypres. One shell alone killed 13 men. Six other days had 10 on more deaths including 1st July 1916, the first day of the Battle of the Somme and the worst in the history of the British Army when 10 were killed. It should be noted, however, that these days were exceptional. Although 125 men died on days when 10 or more were killed, 327 men died on days when they were the only fatality.