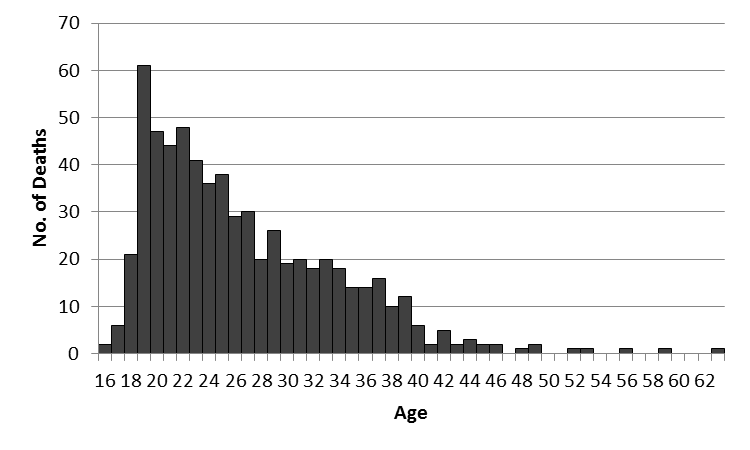 The graph above shows the ages of the men who died in the War. The average age of death was 27 but more 19 year olds were killed than any other age. The youngest two were both 16: Matthew Farrell who lived on Little John St (next to where the Stonewell pub is now) and Harry Grice who lived at 20 Railway St (near the Pointer Roundabout). They were both killed within two weeks of each other fighting with the 1st/5th King’s Own Royal Lancaster Regiment at the Second Battle of Ypres.

Seven 17 year olds also died including: Lieutenant Stanley Bates who, at the time of his death, was the youngest full lieutenant in the British Army. Like the two 16 year olds, he served with the 1st/5th and was killed at the Second Battle of Ypres. His father, John, had been second-in-command of the 1st/5th but had been invalided home before Stanley died. Stanley was gazetted from Lancaster Royal Grammar School’s Cadet Corps. James Cathcart was also killed with the 1st/5th at Second Ypres. He died on the 4th May 1915, a week after his 19 year old brother, George, who was killed on 27th April also with the 1st/5th at Ypres. Their parents lived at 97 Dale St. John Clarke died on the 25th Sept 1915 near Ypres. He lived at 10 Gregson Road and had five brothers, two of whom had already been killed. John Mount who lived at 112 North Edward Street with his parents Lawrence and Margaret was also 17 when he died of dysentery 27/1/1916. He is buried in Lancaster Cemetery. William Ritchie was killed with the 1st/5th near Arras 25/6/1916. His parents, Robert and Bessie, lived at 42 Avondale Road. He was a promising artist who had attended the Storey Institute Art School. William Stephenson died on 21/10/1916 after being gassed on the Somme. He lived at 43 Ullswater Road. The last 17 year old to die was John Hewartson, who was killed in Greece 31/10/1916 with the 2nd Battalion, King’s Own Royal Lancaster Regiment.

The oldest men died in accidents or of illness while serving at home. The oldest was 63 year old Henry Tripp of 55 Norfolk St., Skerton. We know little about him other than that he was in the 3rd (Special Reserve) Battalion of the King’s Own Royal Lancaster Regiment. This battalion was a depot battalion that stayed in the UK throughout the War. He died at home (ie in the UK) and is buried in Skerton Cemetery. Charles Holmes was a 59 year old Lieutenant Colonel in the Royal Army Medical Corps. He served at Bowerham Barracks and lived at 50 Regent St. He died of illness and is buried in Lancaster Cemetery. 56 year old Thomas Tite DCM lived at 1 Trafalgar Road, Bowerham. He had served in the Boer War and re-enlisted at the outbreak of the First World War, serving as a trainer in the 9th Battalion King’s Own Royal Lancaster Regiment. He died after breaking his leg in a training accident and is buried in Lancaster Cemetery.