1916 is often seen as archetypal year of the First World War, mainly because it is the year of the Battle of the Somme. As the graph below shows, however, fewer Lancastrians were killed in 1916 that in any of the other four main years of the war (1915 to 1918, the war started in August 1914 and, although there was fierce fighting, the numbers involved were relatively small). 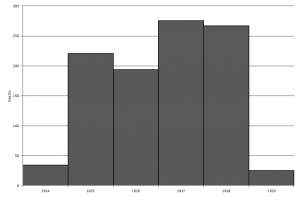 Much of the reason for the relatively low casualties is that the first six months of 1916 were quiet – only 43 Lancastrians were killed from January to June compared to 36 in July and 45 in August. The worst month of the War was May 1915 with 67.

While we tend to associate the First World War as a whole, and 1916 in particular, with trench warfare in France and Flanders, Lancastrians were killed elsewhere including at the Battle of Jutland at the end of May 1916 which killed 4 Lancastrians, and the largely forgotten campaigns in Iraq and Greece which killed 6 and 4 Lancastrians respectively in 1916.