To book a place on one of these seminars, email Alison Findlay a.g.findlay@lancaster.ac.uk 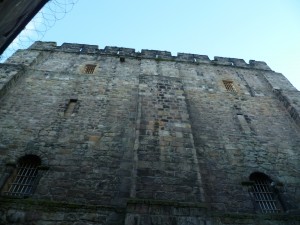 ‘Imprisonment and Liberty in Measure for Measure’

‘Be absolute for death’ (3.1.5) declares the Duke to Claudio, who is imprisoned and awaiting execution. Explore the resonance of these lines in Lancaster Castle, a space where people were held and hung at the monarch’s pleasure in the sixteenth and seventeenth centuries and beyond. The workshop will take place in the former prison settings which are haunted by the presence of those who previously occupied them. No acting experience necessary but not for the faint-hearted!

2 x 1 hour seminars  2-3 and 3-4 p.m in the witches’ dungeon at Lancaster Castle will consider the idea of the witches apparently offering power and freedom of action to Macbeth but his crimes of regicide and murder ultimately trapping him to be ‘cabin’d, cribb’d confin’d, bound in / To saucy doubts and fears’ just as the historical men and women who were accused of witchcraft at the assizes in Lancaster Castle and held in the witches dungeon were trapped.