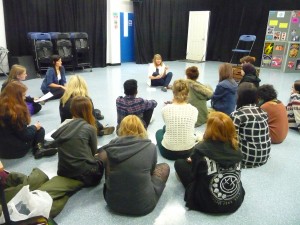 Leaving aside the bonfire and toffee apples, the 5th November kick-started our Shakespeare workshops at the Shakespeare Academy at Solihull’s Sixth Form College, Birmingham. Professor Alison Findlay, accompanied by two PhD students, ran ‘Shakespeare With Chairs’ an interactive 2 hour workshop on Shakespeare’s Richard II with a group of 14 students. Beginning with Bolingbroke’s ‘In God’s name I’ll ascend the regal throne!’, the group explored the precarious authority of the usurper sitting on the royal chair by delivering the Bishop of Carlisle’s prophecy as a menacing choral chant while they circled round the throne. Students remarked ‘the acting really helped me to put the characters own thoughts into perspective.‘ The students then worked in smaller groups, performing sections from the Flint Castle Scene (Act 3 Scene 3) and Richard’s forced public resignation of the crown in Westminster Hall (Act 4 Scene 1) which ignited discussions about spatiality, religion, kingship and the body politic.

Provided with crowns and sceptres as symbols of royal authority, the students were enthusiastic about a technique that ‘showed how to incorporate props into a performance ‘ and further enabled them to engage with the text prior to seeing the RSC’s production in Stratford. When asked to give feedback, one student observed ‘the major benefit of the workshop I believe was because we were acting’ because drama ‘was more effective in putting across the main characteristics of each scene’ This energetic and thought-provoking workshop provided a space for students to engage with Shakespeare’s script as a multi-dimensional text. Participants remarked: ‘The focus on the theatrical side of the play helped me to gain a greater understanding of the character’s actions and emotions throughout’ and ‘the workshop was definitely a brilliant experience’.