Ceremony structures human life every day: from rituals of greeting or parting, eating, drinking, through to those which mark the stages of life for individuals and the community, and civic ceremonies that constitute collective national and religious identities. Shakespeare’s Henry V pertinently raises questions about their value, asking ‘O Ceremony show me but thy worth!’ (2.1.222-6). Since all ceremonies are costly in terms of time, effort and (for larger ceremonies) material resources, what was their value in early modern society? What affective power do they continue to hold today? And what happens when they are represented on stage?

We have explored these events in a series of interdisciplinary seminars using theoretical models developed in social anthropology, and through practical work. (see past events).

Rituals and ceremonies associated with witchcraft were considered in the ‘Capturing Witches’ conference of 2012 to commemorate the 400th anniversary of the first Pendle Witch trial in Lancaster in 1612.  Read more on the Centre for Transcultural Writing website. 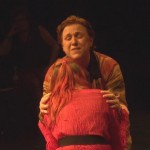 In July 2013 a work-in-progress production of Lady Jane Lumley’s 1550s translation of Iphigenia at Aulis, by Euripides was presented by The Rose Company at Reading University’s Early Modern Conference.

Its representation of sacrifice, ritual and gender will be pursued at the ‘Medieval & Early Modern Cultures of War and Peace: Women and War’ conference at Homerton College, University of Cambridge (23rd November 2014) and at University College London (24th November 2014)

Rites and Revivals at Penshurst Place

Lady Mary Wroth’s play Love’s Victory (c.1614-19) will be staged on 8 June 2014 at Penshurst Place, Kent (the site where it was composed). The Globe Theatre’s ‘Read not Dead’ will be accompanied by an academic conference. Details to follow.