Blog post by Sandra Kemp, Project PI at the V&A, and Chiara Zuanni, postdoctoral researcher at the V&A.

The Musée du quai Branly – Jacques Chirac is one of our project partners and we have visited their collections and archives a number of times over the past year.

Founded in 2006, the Museum has collections comprising 370,000 works originally from Africa, the Near East, Asia, Oceania and the Americas which illustrate the richness and cultural diversity of the non-European civilisations from the Neolithic period (+/-10,000 B.C.) to the 20th century. With more than 370,000 objects, 700,000 iconographical pieces and more than 200,000 reference works, the Musée du quai Branly – Jacques Chirac is one of the richest European public institutions dedicated to the study, preservation and promotion of non-European arts and civilisations.

Andrè Delpuech, our project partner, has recently moved from his position as Head of Collections and curator of the Americas at the Musée du quai Branly to his new role as Director of the Musée de l’Homme. So, we are now working with both institutions and after our first meeting with Andrè at the Musée de l’Homme, we met again with him and the curators of Asia at the quai Branly, to identify more objects that moved between Paris museums. We found a group of objects that had been exchanged with the Pitt Rivers museum in Oxford, an exchange that happened quite late for the temporal boundaries of our research, but that was still interesting in shedding light on the relationship between English and French museums in the mid 20th century. One of these objects was a warrior’s gauntlet from Nagaland (Northeast India), originally in the collections of Sir Robert Neil Read, which the quai Branly received from Oxford in 1946. 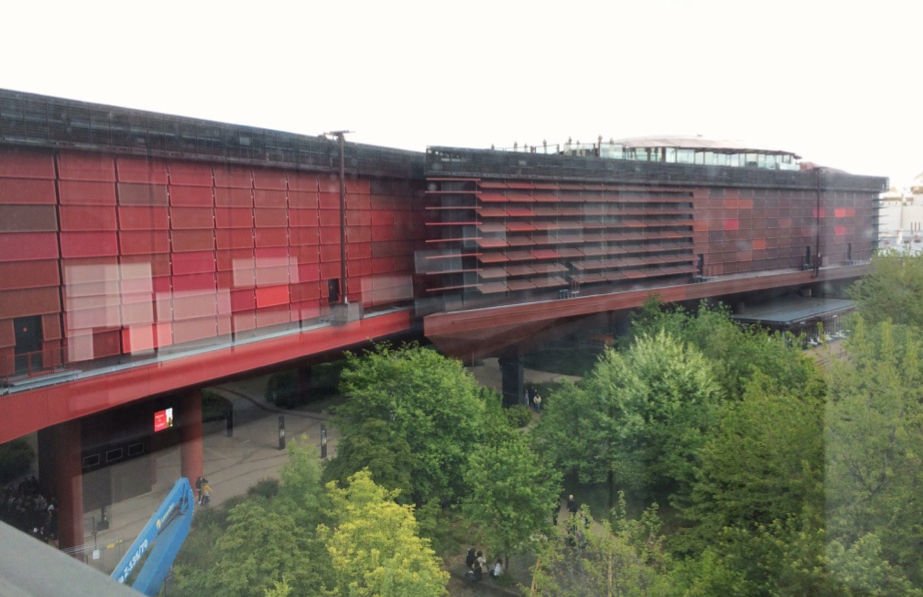 View from the Archive Centre of the Musée du quai Branly.

We also spent time working on the collections and archives databases of the museum, in search of objects that highlighted new connections between museums and institutions, both within France and beyond. We are focusing our research on the objects that were already present in the Musée d’Ethnographie du Trocadéro, founded in 1882. At the time, ethnographic material was present in many Parisian museums – from the Louvre to the Musée Nationale d’Archéologie (Saint-Germain en-Laye), from the Musée d’Histoire Naturelle to the Musée de l’Armée – and thus objects arrived in the Trocadéro through different reconfigurations of institutional remits and subject specialisms. Additionally, some objects already present in Paris’ collections around this period arrived at the Trocadéro much later, being acquired by the descendant of the Musée d’Ethnographie: the Musée de l’Homme. Other objects once present have now left the collections; some European artefacts are now in Marseille, at the Musée des Civilisations de l’Europe et de la Méditerranée (MUCEM). Hence our research in the database had to account for all these factors and different evolutions, which in the quai Branly are partly recorded also in the inventory numbers. Overall, we found a few objects that we decided to investigate more, and we will be discussing them in future posts. On this occasion we were interested to discover evidence as to the original location and movements of objects displayed in the 1878 Trocadéro “Retrospective” exhibition which are now in Marseille. A temporary ethnographic gallery which opened for a few months in the winter of 1878 at the Trocadéro was closed to make way for that exhibition.

Discussions around an anthropology display showed how this was still a new and contested science at the time. Initially, this display was supposed to take place in the Trocadéro, but due to space concerns it was moved to a building outside of the Trocadéro’s gardens. However, we were interested in a French government report, which suggested that to include an anthropological display in the exhibition space might have been problematic, since:

Despite this, the final report of the exhibition, published in 1881, concludes that: 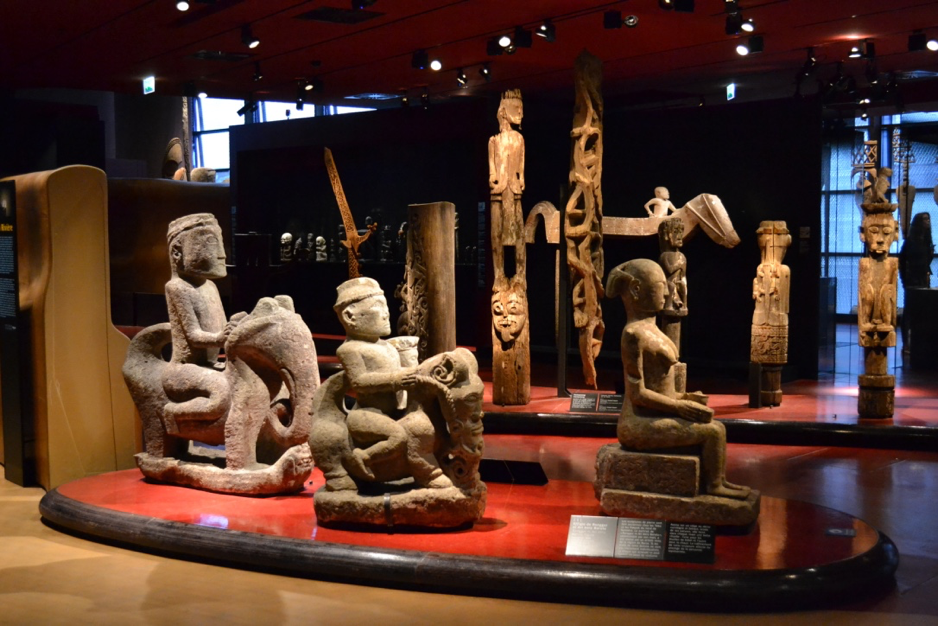 View of the Oceania gallery at the quai Branly.

In addition to archival research, going back to the quai Branly allowed us the opportunity to see its new temporary exhibition, Picasso Primitif. This exhibition focuses on the influence of the display of ethnographic objects on Picasso, particularly at the Musée d’Ethnographie du Trocadéro which he first visited in 1907. The exhibition is divided into two parts: the first follows the evolution of Picasso’s relationship with ‘primitive arts’ (a term used at the time which would in itself require a whole blog post to be unpacked!) and highlights Picasso’s interest in collecting these objects through documentary sources. The second part of the exhibition directly compares Picasso’s works with ethnographic objects from the museum’s own collections, highlighting the huge influence these objects had on the painter. In light of the temporal focus of our research, we were particularly struck by the section on masks. The extraordinary expressive repertoire of facial representations and their unrivalled ability to communicate across cultures and centuries makes them a fascinating exemplar of how material things exist in time. Bound by nature but produced by culture, artifacts with faces have particular resonance as the embodiment of time through communicative power of the human countenance as focal points for narratives of social agency and identity, or of past, present and future.

Picasso Primitif focuses on the period of 1907-1974, the year of Picasso’s death. In this respect the first part is therefore fascinating in the context of our own project as it shows some rare images of the early Trocadéro museum and its displays. Overall, our visit was a great treat – as a bonus, we even found a couple of the objects we had been looking at in our research on display here and so completed our project circle! 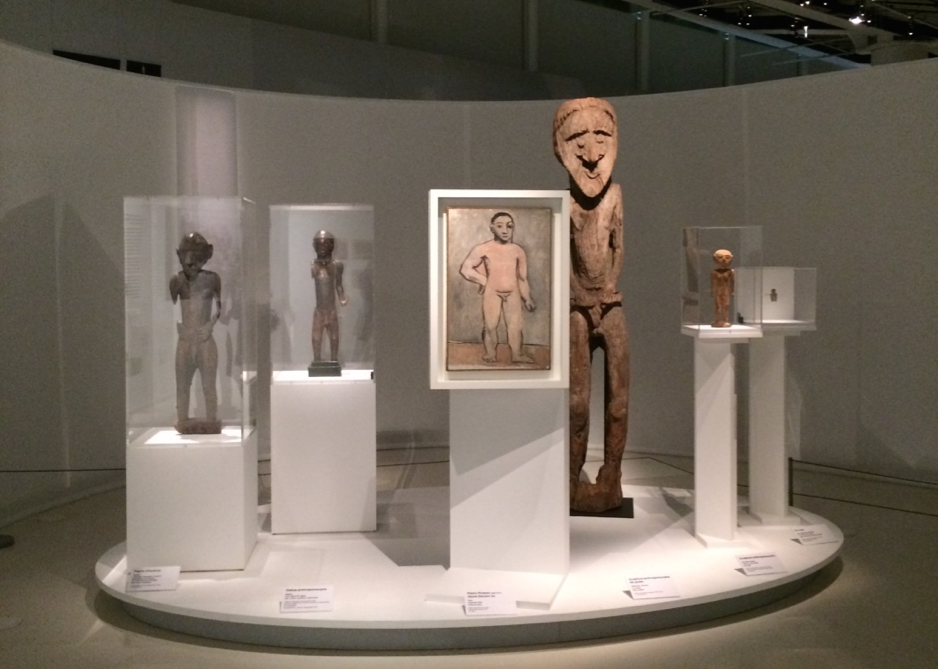 Picasso Primitif at the quai Branly.