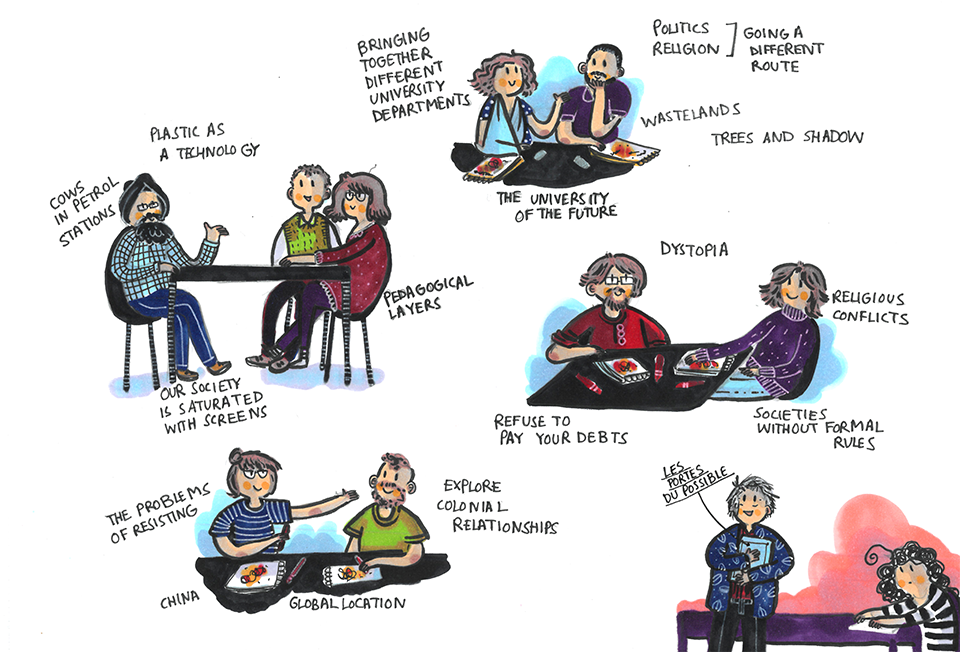 The team were imagining how futures would look like, using various creative practice, such as collage to create both dystopian and utopian futuristic stories, future data or future newspapers, a variety of objects re-imagined and reassembled, in a manner of “what if” thinking. What if a future archeologist found objects from our times left behind in a biscuit tin, how would they interpret it, what would they think? (A display by Erika Fülöp and Joe Deville).

The imaginative scenarios and futurist artefacts really struck me. The event started by Peeter’s presentation which culminated in Peeter’s and Schuiten’ futuristic graphic novel “Revoir Paris”, a story about a young woman in some distant future living in a colony outside the Earth, dreaming about viisting the mother Earth, with all sorts of expectations how this Earth and Paris would look like. She finally manages to visit. What greets her is a tale of two citie,, the beautiful city centre of Paris, under a dome, with all the magnificent buildings preserved, and also appropriated for wealthy tourist marvel, whereas the life outside the dome is its contrast, a grey, unhealthy world of struggling citizens, surrounded by crumbling architecture, in contrast to the colourful dome environment. This is a great reminder of thinking about our contemporary cities and the great divide in them (I remember when I lived in Nottingham, I lived in the street which was literary physically divided by some conrete marks, which symbolically marked the end of the beautiful part of the street, and the beginning of the less beautiful one).

Colleagues across disciplines were tackling social questions of the future as diverse as: how individuals, who would in our times be seen as struggling with mental health or other mental conditions, can give to the society and become the givers and inspiration rather than receivers of social care (Liz and Rebecca), imagining the future of communication technologies (mobile phones), newspapers in a different type of globalised world with new world powers taking over, how it would be if university campuses were phiscially ratehr than virtually mobile, .

The event was wrapped up with .