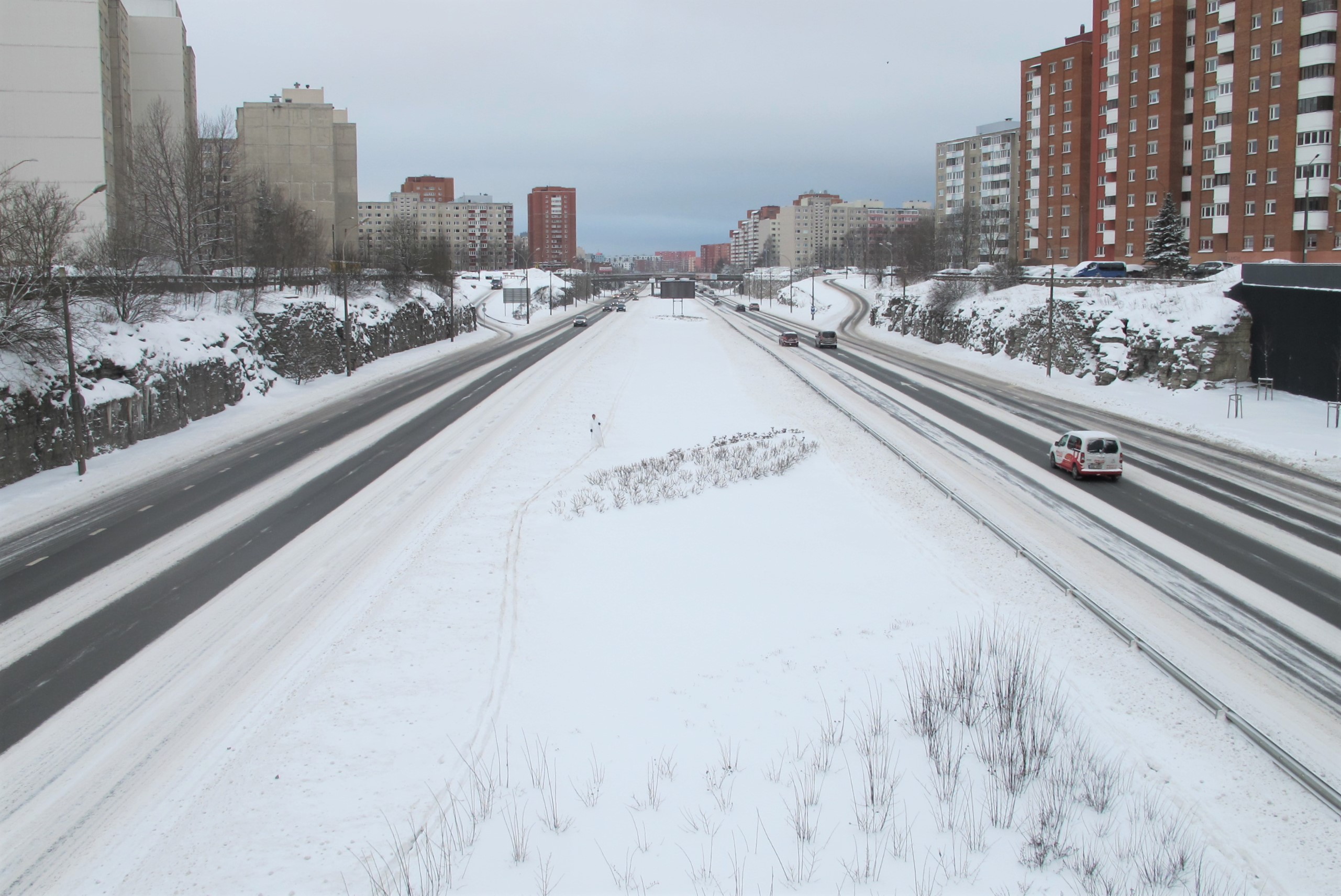 Physically immobile and stable, road infrastructures enable and facilitate various flows of vehicles, people, goods, etc. However, they also can be understood as dynamic matters which bear social and cultural, political and poetical connotations. They can be also examined as spaces of specific atmospheres which may change over time and through the movement along the road. The idea of immobile infrastructure charged with elusive atmospheres has been touched upon through my artistic research on Laagna road in Tallinn.

Laagna road is the highway that connects Lasnamäe, the biggest neighborhood in Tallinn, with the city centre. The six-lanes highway serves as a structural axis of the entire neighborhood that was built in the Soviet times. Based on the ideas of functionalism, Lasnamäe was designed as clusters of multi storey block buildings where living, leisure, and transport functions are separated. Laagna road was planned as one of the main transportation channels for cars, buses and high speed trams. Although the space for the tram line was allocated in the middle of the road, the tram tracks have never been laid there, and today Laagna road provides residents only with bus service and car traffic. However, the planned yet never fully implemented tram line is still visible on the road.

Built in the 1980s, Laagna road was cut through limestone crust. Due to the surrounding limestone walls and ten bridges over the road, it is often called Laagna canal. Two of those bridges have stairs which lead to the unbuilt tram platforms in the middle of the road. These bridges as well as the no-man’s land where tram tracks would have been placed are silent reminders of the grandiose transportation plans and unrealized dreams of the Soviet utopia. The atmosphere of the road infrastructure and how it is charged with the tram idea become central for my artistic investigation.

Intrigued by the story of the tram and by the uncertain status of the space in the middle of Laagna road (it is not intended for pedestrians yet easily accessible), my colleagues and myself embarked on performative walks along the unbuilt tramline. Through our corporal presence and movements, we aimed to imagine how it would have been to travel there by the tram and what kind of atmospheres the road bears. This atmosphere changed in the winter when the road was covered by snow. Dressed in white costumes in order to merge with the snowscape, we went skiing on the road sharing the space with passing cars and buses. Perceiving the snow surface as blank paper, we were drawing tracks by our skis like engineers did when they were planning the high speed tram line on Laagna road.

Aleksandra Ianchenko is an artist and a junior researcher in the project “PUTSPACE: Public Transport as Public Space” (www.putspace.eu). Currently she is doing a joint PhD at Tallinn University (Estonia) and Åbo Akademi University (Finland) focusing on atmospheres on/of public transport and how they can be understood through artistic practice. Previously she obtained MA degrees in Art management at Russian State University for the Humanities in Moscow, spending an exchange year at Humboldt University in Berlin, and in Fine Arts in Technical university in Irkutsk, Russia.