Students at Archbishop’s School, Canterbury, compared Shakespeare’s Hamlet to Love’s Victory (c.1618) by his female contemporary, Lady Mary Wroth, in order to investigate how attitudes to paternal control and romance might differ from those presented in Hamlet.

Miss J. Creaney’s Year 12 class explored Act 1 Scene 3 of Hamlet where Ophelia’s romance with Hamlet is rigorously policed by both her father Polonius and her brother Laertes. 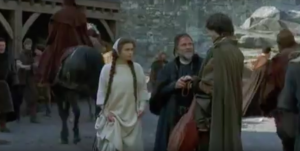 Act 1 Scene 3 Hamlet (1990) directed by Franco Zeffirelli. Ophelia (Helena Bonham Carter) is directed by both her father, Polonius, and brother, Laertes. Ophelia pledges to obey the commands of her father and brother as they forbid the relationship with Hamlet.

Having drawn comparisons with their own autonomy (or lack of it), in romantic relationships, they worked on Act 5 Scene 1 of the female-authored Love’s Victory where the heroine, Musella, is forced into a marriage by the will of her dead father. Musella gives full voice to the spirited feelings of resistance to paternal control which are only glimpsed fleetingly in Ophelia’s role:

Simeana. Have patience.
Musella. I can not, nor I will not.
Patient be! Ay me, and bear this ill lot?
No; I will grieve in spite of grief, and mourn
To make those mad who now to pleasure turn. 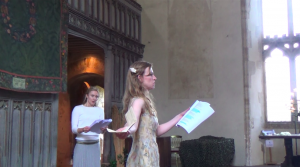 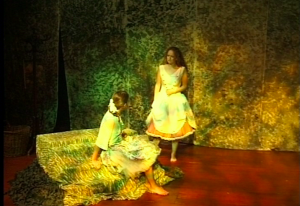