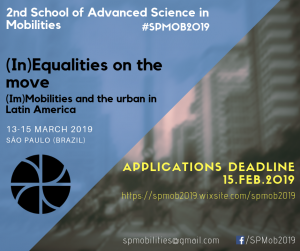 Organized by Bianca Freire-Medeiros and Thiago Allis, SPMob2019 invites researchers at different points of their career to critically examine our cities with the lenses of mobilities. Without restricting analytical and thematic possibilities, we want to think together through the differences and inequalities at multiple spatio-temporal scales. Some of the possible topics include: social markers of difference and their implications for accessibility in urban transport and mobility; the commercialized difference as exoticism / eroticism in tourist mobilities; the assumption of the ethnic-cultural difference that crosses migratory mobilities; the different uses of time – work and leisure – and everyday mobilities, among many others.

Although the proposal of SPMob19 emphasizes Latin American cities, applications will be welcome from those whose research refers to other socio-spatial realities, especially those of the global south, and to develop comparative analyzes. As before, we are committed to redefine the study of mobilities in Brazil and other Latin American countries as a theme of the Social and Human Sciences, refusing the technicalist perspective that obscures its political, conflictive and iniquitous dimension.