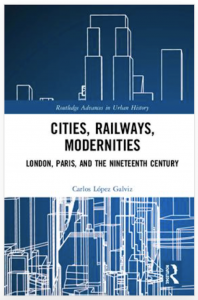 Cities, Railways, Modernities chronicles the transformation that London and Paris experienced during the 19th century through the lens of the London Underground and the Paris Métro. By highlighting the multiple ways in which the future of the two cities was imagined and the role that railways played in that process, it challenges and refines two of the most dominant myths of urban modernity: a planned Paris and an unplanned London. The book recovers a significant body of work around the ideas, the plans, the context, and the building of metropolitan railways in the two cities to provide new insights into the relationship of transport technologies and urban change during the 19th century. It invites us to think about alternative ways of connecting the urban past to our urban futures.

The book is part of the series Routledge Advances in Urban History. To order a print copy or e-book followed this link.