Callum, aged 12, lives with his parents in a council flat. He told us: ‘We live on the ground floor…. We lost everything’ in the flood. On the day of the flood, the family watched the floodwaters rising and then went to bed. The next morning he said his dad:

…opened the door to see what was happening and there was all this water sort of coming down …  Then we stayed for a little bit, then it went up more, and then it went to the top step and Dad said, ‘We need to go now. When I say now, I mean now.’ 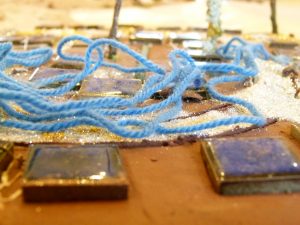 Callum and Ben’s model of their flooded street

The family evacuated to his grandparents’ house, which Callum thought was a better option than the one offered to children who had no relatives living locally and who were forced to move into distant rented accommodation – some families with children were relocated to such unfamiliar spaces as an army barracks and airport hotels. But living with relatives turned out to be problematic for Callum in various ways.

He had difficulty sleeping at his grandparents’ home in a tiny room amongst all of the packing cases and plastic bags that were stacked up to the ceiling full of his family’s belongings.

Added to this, Callum was not used to going to school on the bus. Living locally, he had always walked. The new bus journey was totally strange to him: ‘I got sort of upset in school sometimes, because like I just couldn’t stand going on the bus’. He found the journey very stressful and claustrophobic – ‘I was like I can’t do this.., this is so sweaty’ and he was sweating into his clothes which made him very uncomfortable and self-conscious.

Callum needed £1.25 for each bus journey i.e. £2.50 per day. The family didn’t receive a bus pass to help with the immediate costs of this and so Callum was very much responsible for paying the fare and keeping the money safe for the return journey. This was new and stressful for him. He told us he didn’t know if the family ever received a refund for these extra costs. 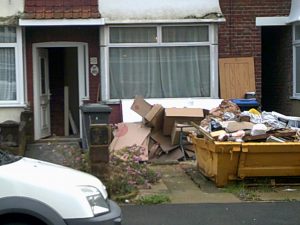 Photo taken by one of the participants from the Children, Young people and Flooding Project

Callum returned home eight months after the flood to a road that he described as a ‘ghost town’ – they were one of the first families to return. But the road was full of potholes and needed repairing. Callum got very angry when he saw the workmen who he described as ‘ard’ chucking stuff down the drains: ‘They were just like laying around’ giving the impression ‘oh I can’t be bothered’.

Callum’s experience demonstrates the need for more flood awareness at school and from the Local Authority. What Callum needed was a member of staff at school to find out how he was coping with the unfamiliar journey to and from school and then to team him up with someone who could show him the ropes. His parents needed to know insurers were aware of these extra travel costs and would provide the funds up front or negotiate a bus pass (resulting in less stress and stigma) and that he needed to get back to his own home asap. Callum would also benefit from knowing that the councils can help by making it an offence to empty rubbish into drains, causing blockages. 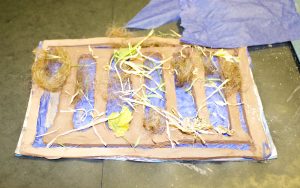