The second workshop of the ‘Universal Histories and Universal Museums’ research project was held on Wednesday 27th September at the Musée de l’Homme in Paris.

After a short welcome by André Delpuech, director of the Musée de l’Homme and research partner of the project, and an introduction to the project by Sandra Kemp, project principal investigator, a series of presentations focused on the display of Asian objects in ethnographic and arts exhibitions in the late nineteenth century in France and the UK, exploring the acquisition, inventory and display of Asian objects in Western museums.

Christiane Demeulenaere-Douyére (Archives Nationales) introduced the theme of universal exhibitions and their role in disseminating new knowledge about science, art, and culture. In particular, she focused on case studies from Paris, emphasising how the 1878 Universal Exhibition contributed to French people’s rising interest in Japan. At the same time, she presented the landscape of the 1878 Exhibition, with the Champ de Mars and the Palace du Trocadéro, the latter still remaining – albeit changed – as a permanent legacy of the event.

Pierre Baptiste (Musée Guimet) gave an overview of the history of the the Musée Guimet, focusing on its founding father, Émile Guimet, and the influence his travels and experiences had on the collections and his museological project. This paper, drawing also on the research for the upcoming exhibition Enquêtes vagabondes, le voyage illustré d’Émile Guimet en Asie which opens at the Musée Guimet at the beginning of December (2017), revealed how Guimet was influenced by visits to other displays, in Europe and abroad. His museum would become a place for knowledge about Asia, in which a library and well-organised displays set out to present Asian artefacts and religions in a scientific way.

Claire Wintle (University of Brighton) opened our first panel on UK case studies by questioning how disciplinary and geographical boundaries struggled to make sense of the histories and identities of Asian cultures. Her paper analysed the complicated history of artefacts from the Andaman and Nicobar Islands in the British Museum, noting how rarely these were associated with India. The artefacts of the indigenous people of these islands were more often associated with ethnology than with the display of Indian arts and religion.

Arthur MacGregor (Ashmolean Museum) offered an overview of the history of the Indian Museum of the East India Company through visitor accounts of the founding collections, observing how certain artefacts – such as Tipu’s tiger – had a key role in capturing the public imagination. He also discussed the reception in the press of Indian collections in London, noting the difficulties in contextualising and understanding these objects, especially within disciplinary boundaries.

Finally, Sandra Kemp (V&A) presented a paper, drawing on the ‘Universal Histories and Universal Museums’ research and her previous work on John Lockwood Kipling, on critical and curatorial perspectives on the 1878 Universal Exhibition. In the paper, she compared the approaches to India evidence in the displays of Ernest Theodore Hamy and John Lockwood Kipling. Both Hamy and Kipling contributed to the selection and presentation of numerous displays as well as to the development of new museums (the Trocadéro and the Lahore Museum). They both visited exhibitions in France and the UK writing detailed descriptions and critiques. It was interesting to hear the ways in which they both acknowledged the role of temporary exhibitions in shaping museums and the challenges of representing a culture through the objects available in collections. At the same time, they were also often critical of display practices (such as insufficient labelling and unrepresentative practices of selection as noted by Kipling in relation to the English displays in 1878).

Kate Hill (University of Lincoln), who chaired this first panel, started the summative discussion by noting how – across all the case studies – museums had ‘taken up the world and divided it’, but had then struggled with these taxonomies and in finding a place for all the collections. She then invited participants to reflect on the balance between contingency and power, in shaping collections and displays. Finally, she questioned how the ‘spectacular’ characteristic of universal exhibitions impacted on, and transferred to, more permanent displays, and therefore whether more research is needed in the reciprocal possibilities and limitations of temporary and permanent exhibitions.

After a well-deserved lunch break, we visited the terrace of the Musée de l’Homme. From there, we enjoyed a great view of Paris and the Trocadéro palace. André Delpuech drew our attention to the remains of the original building, from 1878, which are now included – but not obliterated – by the 1937 expansion of the Trocadéro with its imposing concrete structure.

In the afternoon, our second panel of the day focused on French case studies. Christiane Demeulenaere-Douyére (Archives Nationales) presented a fascinating paper tracing the history of the collections of the French mission to Indo-China in 1843-46. Objects that were brought back together were then separated across different institutions and collections, and as a result sometimes not even their common origin is remembered.

Thierry Zephir presented the case-study of the Angkor collection at the Musée Guimet and the crucial role of Louis Delaporte in acquiring and informing the display of these objects. Particularly, he focused on the case of the casts, which allow seeing the monuments as they were in the mid-nineteenth century, prior to their deterioration, but whose value was often questioned in the museum to the point that for years they were stored in a building in unsafe conditions and their story was almost forgotten. Only more recently, Pierre Baptiste and Zephir managed to track down all this material again, restoring it and redisplaying it in a major exhibition at the Musée Guimet in 2013-14.

In chairing the summative discussion of the afternoon panel, André Delpuech discussed the origins of ethnographic collections in Paris and focused particularly on the ethnographic galleries in the Musée de l’Armée, showing some fascinating images of the mannequins with weapons from around the world that were displayed there.

Finally, Hervé Inglebert concluded the workshop by reflecting upon the papers in the context of the larger project themes relating to ‘Universal Museums’.  Inglebert highlighted that many of papers examined the contemporary ruptures within the encyclopaedic values which underpinned Universal museums. Several papers illuminated the limitations of European encyclopaedic taxonomies that were already emerging within the nineteenth-century: as museums struggled to find places for objects within collections; as museums struggled to contain Andamanese and Nicobarese cultures and histories within their scientific and imperial hierarchies; as visitors were far more interested in the collection of ‘miscellaneous articles’ of the India Museum rather than the neatly devised botanical, agricultural and architectural displays. We also explored how these ruptures in categorisation also spilled into display practices, with Hamy and Kipling’s critiques of the exhibitions of Asian cultures at the South Kensington Museum, which again reinforce the relationship between universalities and the display of material culture. Another core topic was the question of value within universal museums as the final panel focussed on forgotten, dispersed and neglected works from Indochinese cultures as collections were broken up, or left in inadequate storage. Presenters guided us through the ethical and practical challenges of attempting to recover the lost provenance of a collection or tracking down, restoring and rehousing neglected objects. More importantly, they discussed the opportunities such activities create for us to amend the oversights of previous generations.

Finally, Inglebert announced our next event, the workshop ‘Museum universalities in Western cultural capitals in the nineteenth and early twentieth century’, which will be held at the Université Paris Nanterre on Friday 17th November 2017. 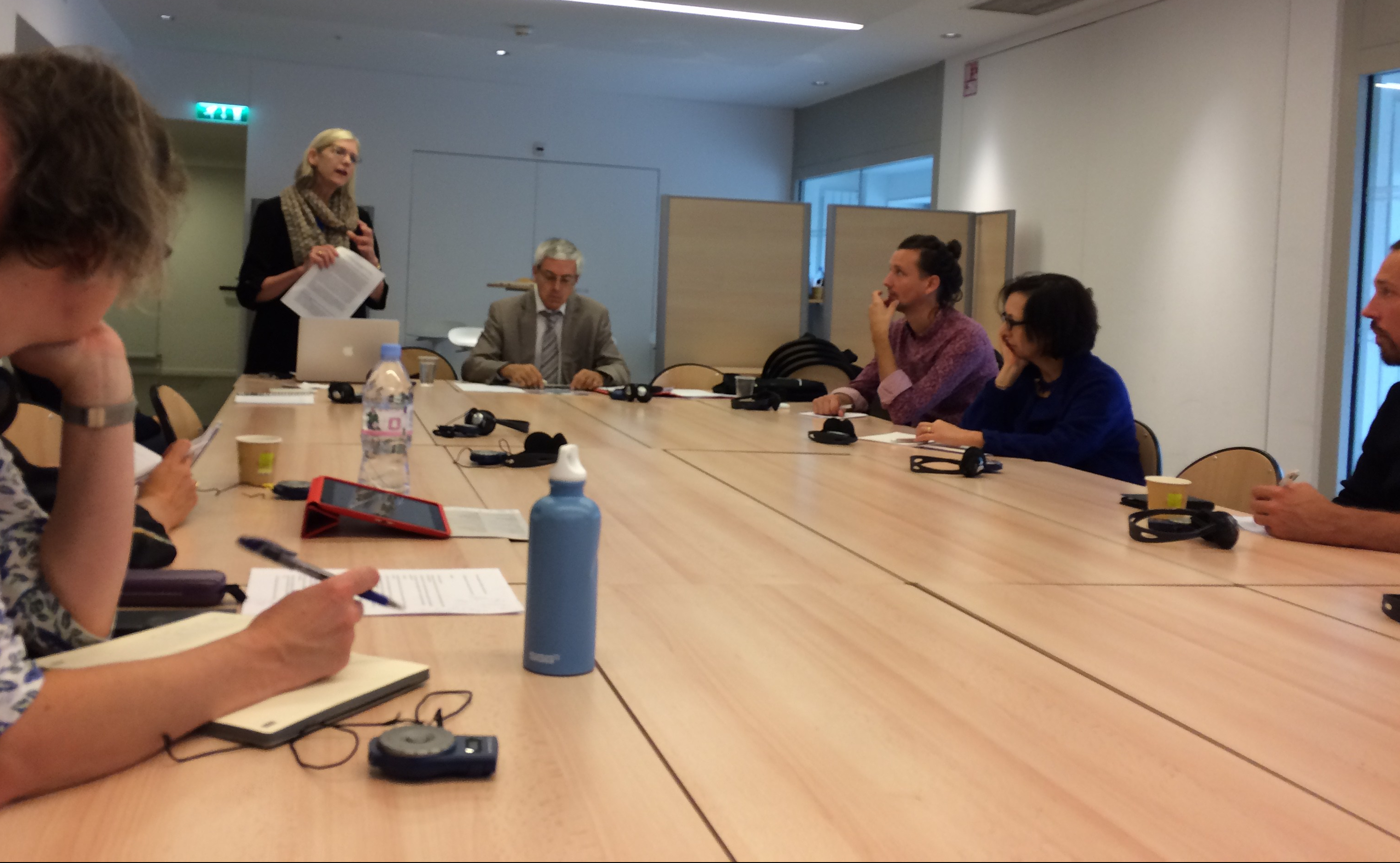