1. Jet lag, Jet lag, Jet lag
It took me a lot longer to adjust to the new time zone (7 hours behind UK time) than I thought it would. The day after I landed I woke up at 5 and had unpacked, and decorated my room with photos all before 10am! 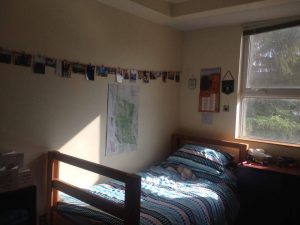 2. How to survive without kitchenware and food
When I arrived all that was in the kitchen were a few glasses, a travel bowl and some plastic cutlery. The first few days were so busy that we had no time to go shopping, so we just had to collect plastic cutlery, paper plates and survive off as much free food as we could to get by! On the first day the only thing I had to eat was some microwaveable popcorn! 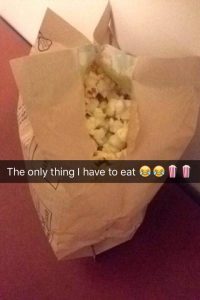 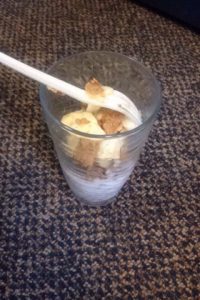 My survival methods; Be inventive with the limited kitchenware you have and eat everything out of your welcome pack even if it is popcorn for breakfast!!

3.’College’ is very different the University
For a start university is called college and you don’t attend lectures you go to class. My classes so far are more like being back in high school; they are in classrooms and there are only about 60 people in a class as opposed to the 200 in a lecture at Lancaster. The lecturers (*profs) are very down to earth and really friendly and seem to try and make as many jokes as they can per class!! Also, students here study a range of classes, much like high school, but just have a major that they hope to graduate with instead of following a strict degree program like we do in the UK.

My first experience of how Canadian universities differ from those in the UK was a PEP rally that I attended with my orientation week group. Each faculty had its own chant and everyone was getting involved, it was so much fun! (If you asked people at home to do that they would look at you like you were stupid!)

Once the chanting was over the deans from each faculty and a few special quests paraded down the middle aisle, preceded by a man playing bagpipes. The ceremony was really interesting; everyone stood to sing the national anthem (which I need to learn!), an aboriginal elder (wearing full headdress) blessed everyone with a tribal prayer and then each dean stepped forward and their faculty went crazy (It doesn’t take much to get a crowd going here!!). We then heard talks from the chancellor of the University (who is an astronaut!) and a Stanford University professor on stress management, which was so interesting.

4. They love the Wild West here
From the moment I stepped off the plane and saw locals wearing cowboy hats I realised that they like their wild west culture here. The first club that I visited was called Knoxville’s and as soon as I walked through the door I realised it was a country club; there was a tractor by the door, a rodeo bull, a giant glittery cowboy hat and some classic country music playing. After also visiting Cowboy’s (another club in town) I have realised they love their line dancing here (I’m rubbish but it’s so much fun!) 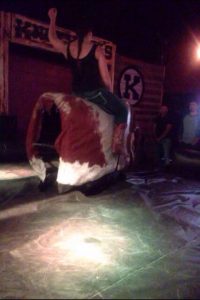 The Rodeo bull in Knoxville’s, I was amazing (really wasn’t, I’m too weak!!)

5. The weather in Calgary is very bizarre
The saying here is;

“If you don’t like the weather in Calgary, give it 5 minutes”

I agree completely with this statement; I’ve never been somewhere before where one minute it’s 20 degrees C and the next it’s 4. The other day it was really sunny and warm and the next minute there was a huge hailstorm and the loudest thunderstorm I have ever experienced! 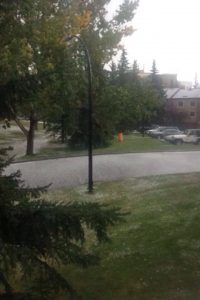 Earlier the same day it was 24 degrees and sunny and then suddenly there was a massive hailstorm which left the ground looking quite white!

6. Apparently I have a strong British accent
In one of my first classes we had to say our names and why we were studying Environmental science: I must have said 20 words and the lecturer said ‘You’re from England?’. All the Canadians in my orientation group keep commenting on my accent and how I call things by ‘weird’ names;
‘Lift’ not ‘Elevator’
‘Crisps’ not ‘Chips’
‘Bin’ not ‘Trash can’
‘Maths’ not ‘Math’

7. Thrift shops
After failing to acquire anything for the flat at a free giveaway (they opened an hour early 🙁 ) we were left with no kitchenware. Luckily we found thrift shops, which are just charity shops but they are much bigger than you find at home and they have so much kitchenware (and everything is so cheap).

8. American football matches are exactly like you see in films
I’ve never really been a massive sports fan but I have always thought American football matches look like lots of fun. The match was exactly as you see in films; a massive stadium, cheerleaders, cheering and a huge screen to watch highlights of the match (apparently matches are a lot bigger in the states though). The only thing was the match wasn’t that exciting, it kept stopping every 10 seconds (not sure I’m going to be a massive fan anytime soon!).

McMahon stadium is massive, holding 46,020 people! No surprise that the stadium wasn’t even half full for the Dino game!

9.Bubble soccer is so much fun
Now this is a sport I could get into; rolling around a field, flipping upside down, so much fun (although my team lost). 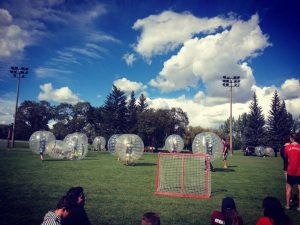 10. Shopping here is so confusing
You are probably thinking what is she on about! Everything about shopping here is different from at home. To start with, the currency is different and it took me until the end of the week to find out that $1 does not equal 50p; it’s not that easy 🙁 . Then they don’t advertise things with tax so I got a shock at the checkout for the first few times when they charged me more than the advertised price.