“Not all those who wander are lost.”

Study Abroad is an experience – that much at least should be clear by now. Well, actually it’s more like a collection of little experiences that will all eventually come together to make up the bigger picture, just like pieces of a jigsaw puzzle. That’s why no two people will ever go on the same exchange, even if they go to the same university, in the same country, even at the same time. Moreover, the experience – how it unfolds, what you take from it etc. – that part is all up to you. I think it was Albus Dumbledore who once said our choices define us much more than our actions and, you know what? He had a point!

I think one of the biggest choices I made (in terms of how it’s affected my Study Abroad experience so far) was my decision to not get a new plan for my mobile phone. There were several practical reasons for this, most of them to do with money (I’d have had to pay to break my contract, phone plans here are much more expensive… the list goes on and on), but finances aside, the more I thought it over, the more I decided to give it a go. I’ve been the proud owner of my own mobile phone since I was eleven-years-old, and I got my first smart phone when I was sixteen. In other words, for the past four or five years, if ever I’ve needed to know something – be it the local bus timetable, the name of the last five Prime Ministers, or even detailed instructions on how to mop a kitchen floor (don’t judge me, but I genuinely did once Google that) – it’s only taken me a few moments to find it out. We really do live with the wealth of humanity’s knowledge at our fingertips, and the prospect of taking that away was more than just a little daunting for me. Which of course only made me more determined to do it.

I should point out here that I haven’t gone completely cold turkey. I keep my phone on aeroplane mode most of the time, but I can still access Wi-Fi and, living in a city such as Montréal, I’m rarely without a good connection. But this has made the process of getting from A to B a whole lot more interesting – especially when I don’t have the foggiest idea where B is. Which is most of the time seeing how my sense of direction is determinedly backwards even on a good day. 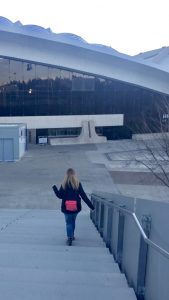 I have no idea where I am going.

You would be surprised at how many people react with horror upon hearing that I don’t have a Canadian phone number, meaning I don’t have access to 3G which leaves me permanently stranded between Wi-Fi hotspots. I frequently get asked questions such as ‘how do you manage?’ or ‘don’t you think you should just get one?’, which to me only further reiterates how dependent we have become on the Internet to solve all our problems for us. The point is, we as a species managed perfectly well before Tim Berners-Lee came along and though I shall be eternally grateful to him for doing so (that floor wasn’t going to mop itself), it is more than possible to exist without being permanently connected to the World-Wide Web.

In fact, I would argue that it makes life (and certainly my Study Abroad experience) a lot more interesting. Not being able to rely on my phone to tell me where to go forces me to look up for a change, meaning I see so much more of what’s around me. Montréal is one of the most beautiful cities out there, but sometimes you have to go looking for the best bits, and I can tell you now that you won’t find them on a screen. Things like watching the sun set over the Olympic Stadium, seeing Downtown all lit up at night from the other end of Rue Sherbrooke or catching sight of the tip of a racoon’s stripy tail as it dives for cover behind a wheelie bin (sorry, trash can). Moments like those are fleeting; if you blink, then you can miss them just like that and if you’re too busy scowling at your phone screen because Google doesn’t have a clue where you are either, then you won’t even realise they were there in the first place.

The Plateau by Night

It’s true that not all those who wander are lost, but sometimes getting lost is half the fun of wandering. Don’t get me wrong, having 3G can be a lifesaver – especially when you’re stuck outside your friend’s apartment having to resort to throwing stones at their window Romeo-style because their buzzer isn’t working and you don’t have the Wi-Fi password to message them – but you don’t need it to survive. So, the next time you’re somewhere new, take the road less travelled by and remember to look up from your phone screen every now and then. Because you never know what you might see hiding just around the corner. 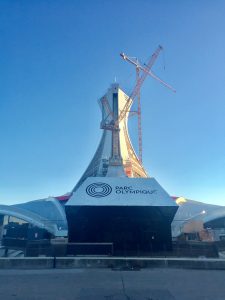 Given how big it is, the stadium was surprisingly hard to find.

Eleanor Roosevelt once said “Do one thing a day which scares you”, and recently, this has resonated with me more than ever. Since leaving the UK a few weeks ago to start my Study Abroad adventure, I have had to do multiple things which scared the hell out of me, but I survived and I am still surviving – even if I’m not quite sure how. Given that studying abroad has always been something I wanted to do (hence why I chose to come to Lancaster), from the moment I arrived it seemed like all of my focus was geared towards spending my second year in another country. And, as of such, I sort of forgot to think about what would happen afterwards. As an example, somehow the fact that I would have to make the journey from England to Canada alone was something I never contemplated until it actually happened. It made me think about how, during the build-up to going on exchange, there are a lot of things you forget about, and then when you remember them it can sometimes be a little scary. This piece is about how it’s okay to be caught off-guard by certain things – especially emotions you weren’t expecting to have – and how at the end of the day, it’s just another part of the experience.

For some reason, I never thought that I would be struck quite so emotionally. I’m not really the sort of person who wears their heart on their sleeve – at least, not when I’m in public and surrounded by strangers. And besides, for the past six months or so, the fact that I’m spending my second year of university abroad in the beautiful city of Montréal, was a source of excitement. Don’t get me wrong – there were always nerves – but when I imagined the moment I finally said goodbye to my parents at the gates to airport security, I always envisioned myself striding stoically off into the distance, ready to meet adventure head-on.

So when instead my mum and dad turned to hug me for the last time, and I felt the tell-tale sting of tears behind my eyes, a part of me was shocked. The other part of me – the bigger part – was terrified. In those moments as I walked away, I suddenly found myself wondering if perhaps I was making a huge mistake. Thoughts such as “what the hell am I doing?” followed swiftly by “I can’t do this!” ricocheted around my brain in such chaotic fashion that I’m still surprised I managed to make it through Heathrow Security without any mishaps.

Now, this doesn’t sound like a promising start, and probably makes this post sound somewhat depressing, which is possibly why no one ever mentions this side of going on exchange – the side which involves frantic nerves, copious amounts of stress and a healthy dose of anxiety (in some cases). But also because, even though it doesn’t always feel like it, this feeling of being stuck at a loose end with no idea what you’re doing, where you’re going or how you’re going to survive the next few days (let alone an entire academic year) is not permanent. As soon as I was through Security, and found myself staring out over the labyrinth that is Heathrow Terminal 5, I realised that I couldn’t afford to panic. Switching off and going to find a corner to rock in wasn’t an option; there were things which needed to be done, such as finding out which gate my flight was boarding from. And, since then, I’ve found myself falling into a very similar pattern. If I only focus on what is immediately in front of me, whether that’s the whole day or just a certain part of it, everything suddenly seems a lot less daunting. As soon as I let myself start thinking about all of the things I need to do over the next couple of weeks and worrying over how I’m going to do them, that same panic starts to set in. And, once it has, it can be quite difficult to shake off. 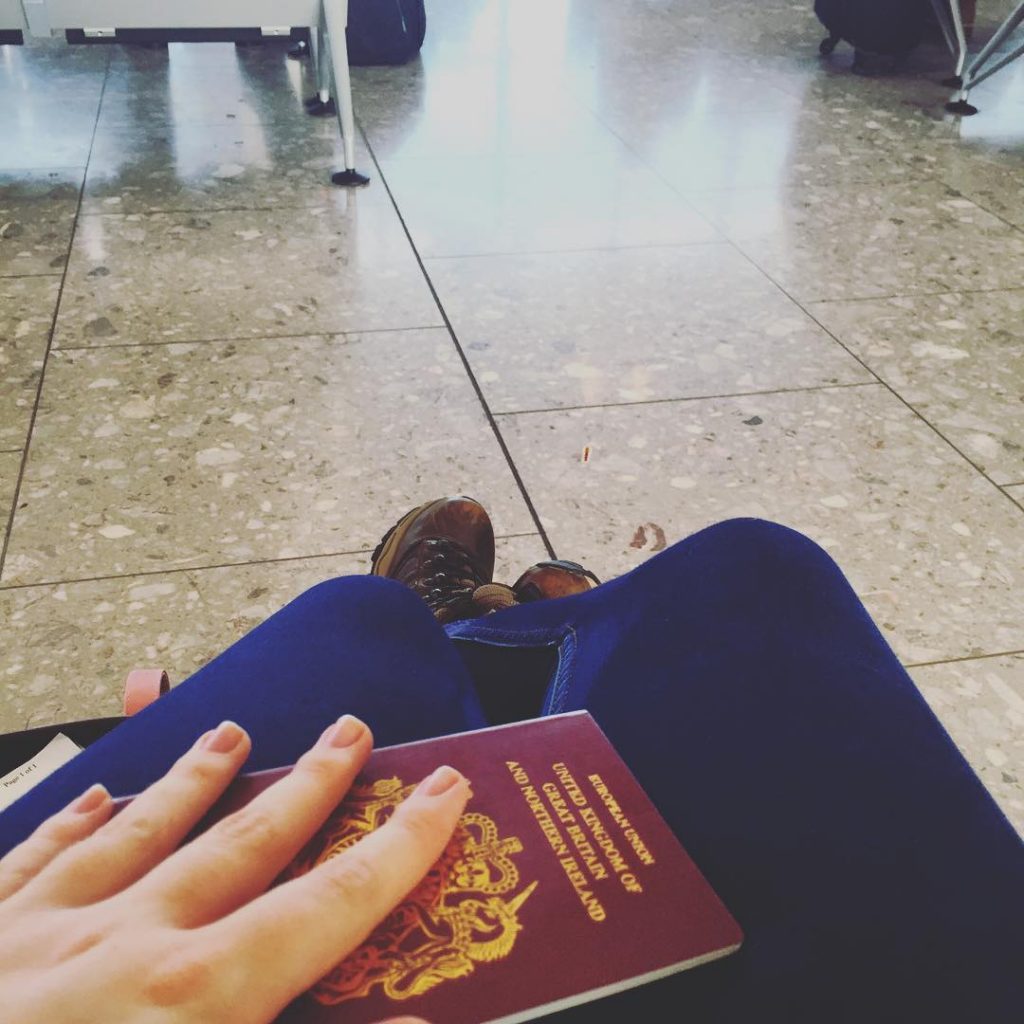 In short, what I’m trying to say is that feeling scared is not a bad thing. It’s what you do with that fear, and whether or not you let it control you, that matters the most. I didn’t think that I would get emotional saying goodbye to my parents, and the fact that I did genuinely concerned me, as it made me question whether or not I was going to be able to cope being on the other side of the Atlantic to them for nine months. But though I had my fears, I didn’t let them stop me, and now here I am, sat in my new apartment in Downtown Montreal, ready to start my adventure at McGill University. So, yes, Study Abroad is an intimidating experience – especially in the beginning. And I don’t expect that to suddenly change overnight. But so long as I keep pushing forwards, and I don’t let my fears and my worries get the better of me, then I have every faith that I’ll make it through these next nine months, and quite possibly be all the better for it once my exchange is over. Because it’s okay to be scared. Being scared just means you’re about to do something brave.