Visiting the Rockies is the most beautiful place that I have ever been!

Currently I have been lucky enough to visit Banff National Park twice! During those times I have been to five lakes: Lake Louise, Moraine Lake, Mirror Lake, Lake Taylor and Lake O’Brien. I cannot describe to you how phenomenal the Rockies are. They lie about an hour and a half away from Calgary depending on where you are going. Approaching them for the first time made my friend cry and also took my breath away! Seen as I cannot describe the beauty of the Rockies you simply need to go and see it for yourself. The best way to see them in my opinion is through joining the Outdoor Adventurers Society, a society on campus that bands together and drives you to your destination for a small fee. We went on hikes together through the wilderness and it was the perfect opportunities to get to know people, soak up the Canadian landscape and get some fresh air. 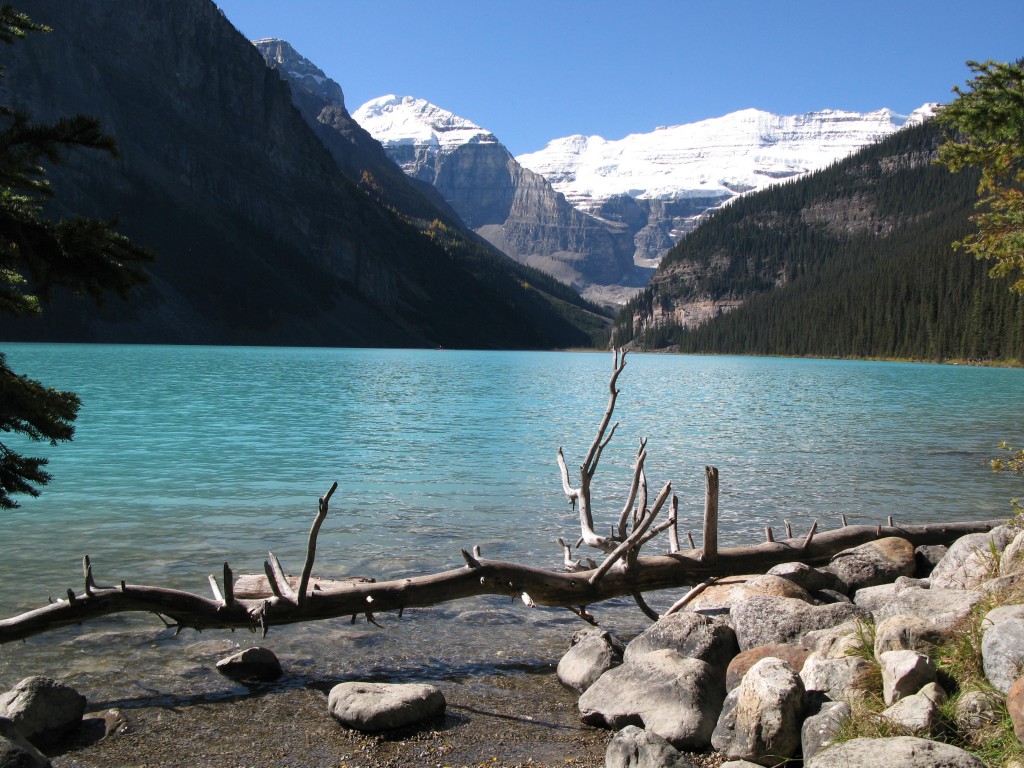 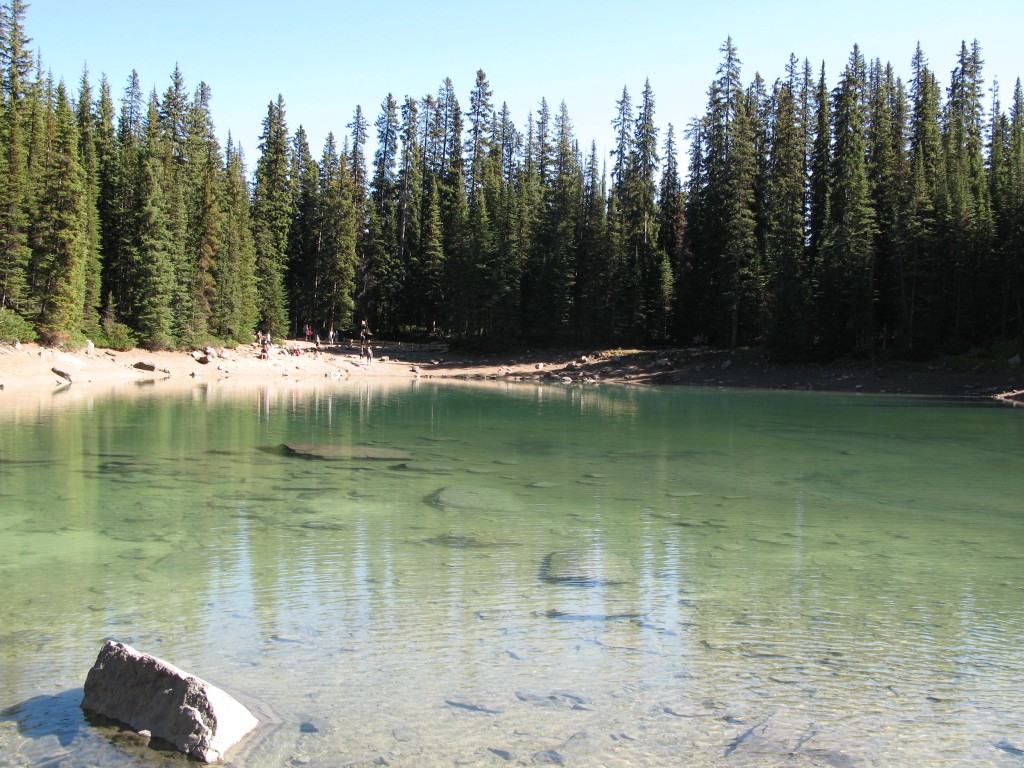 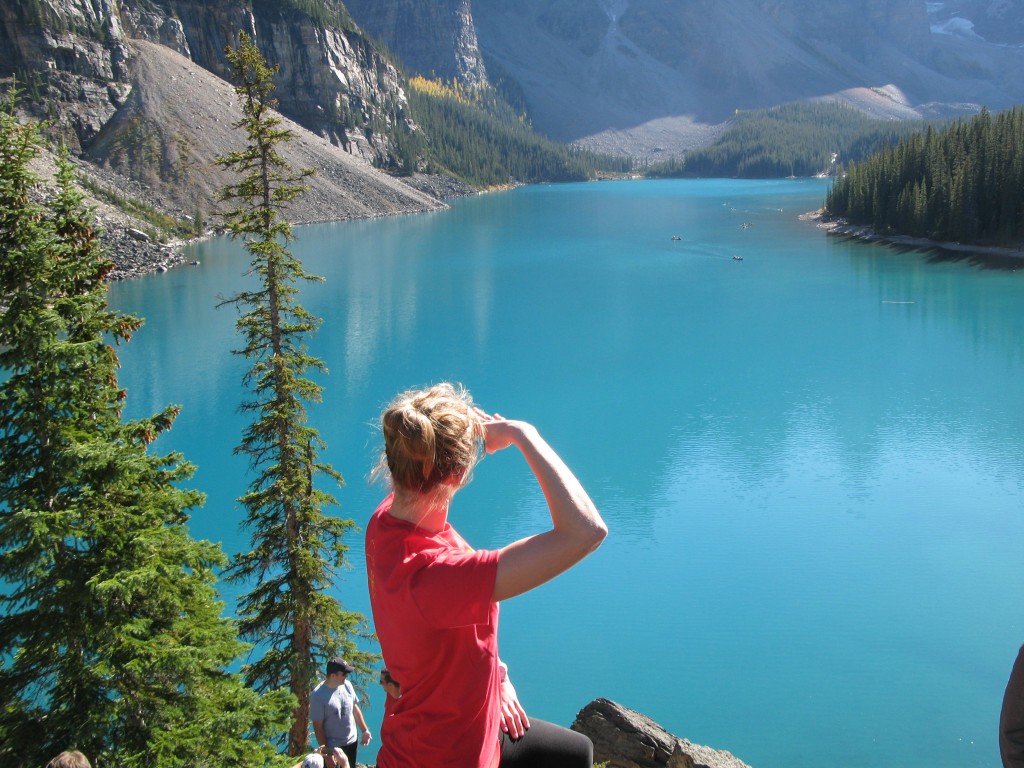 I could talk about so much more, trying to fit a months’ worth of adventurers into this one blog update is proving to be impossible! I do not write this blog to make you jealous but to inspire you to come and visit Alberta. From my experience so far Canada is an amazing country with so much to offer! I have got the feeling that I am never going to get bored here and I will be sad to leave next year. Therefore, I’m going to make the most of every minute that I spend in Calgary. I have also got a trip planned to visit Vancouver during the term’s reading week. You can get a coach service called the Greyhound from Calgary to Vancouver quite cheaply, the only problem is you will be on a coach for over 10 hours, but I am hoping it will be worth it.

I hope that you enjoyed my blog this time round.

Firstly, please do not miss the famous wing night! Often one chicken wing costs only $0.35 on certain nights, on campus that will be Wednesday. This price is equivalent to about £0.15p and it is up to you to consume as many as you want! From teriyaki to salt and pepper, hot wings to BBQ wings the possibilities are endless! I always have wings after the gym to fix my protein cravings! YEAH! Let’s work out! Sorry, I am getting a little bit carried away here, a lot of Canadians are into being fit and healthy so I have kind of adopted this trend and regularly go to the gym on campus, which is free apart from a $25 residence charge at the start of the academic year.

Okay so me talking about hot wings is not the most interesting topic and yet again my blog has gone back to food, but now I am going to promote to you the wonderful game of hockey. I just wanted to say that I cannot believe how aggressive ice hockey is! Oh and please just call it hockey and not ice hockey because ice hockey is the only form of hockey that Canadians know. This was the first time that I have ever watched it and every time a player got slammed down into the ice, elbowed in the face or smashed into the side of the area all I could do was grit my teeth and go “oooooh!” However, I did get more into the game as it progressed and when there was a fight I joined in with the crowd and yelled in delight! I was just copying the crowd and trying to fit in. They are big guys and undoubtedly they can handle themselves. Anyway, it was a pre-season game and I watched the University of Calgary Dinos play the Calgary Flames (the city’s hockey team), unfortunately we lost 3-1 but it was an experience that I will never forget! 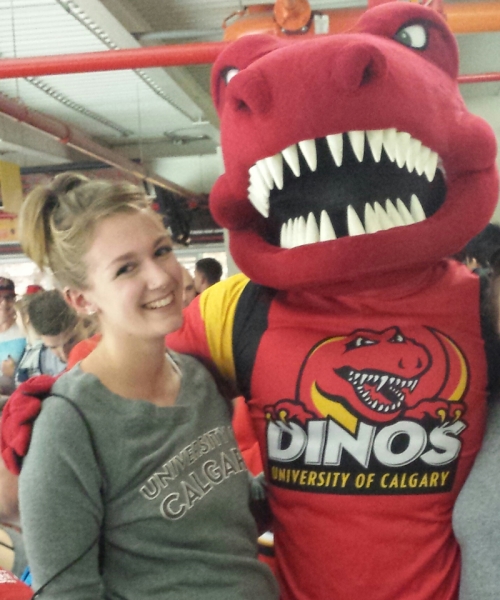 Continuing on the sporting theme I also watched Calgary Stampeders play at the McMahon stadium one weekend. They were playing the Toronto Argonauts! We were losing badly during the first half but somehow the Stampeders managed to pull ahead in the last 5 minutes, ending the game on 40-33! I have never been so excited before, I did not think that I would like it, let alone understand the Canadian Football League but I have picked it up and now I am a little bit of an addict, I must admit. I still say football when I am on about the football leagues at home but I get reminded that it is called “soccer”, something I was not so happy to repeat. On the note of word differences, I must add that I sat in a restaurant and ordered chips the other day, I had a real craving for them! Instead I was surprised when the waitress brought me out crisps. The Canadians call chips fries and crisps are non-existent apparently, I need to say fries if I actually want chips next time, lesson learned. 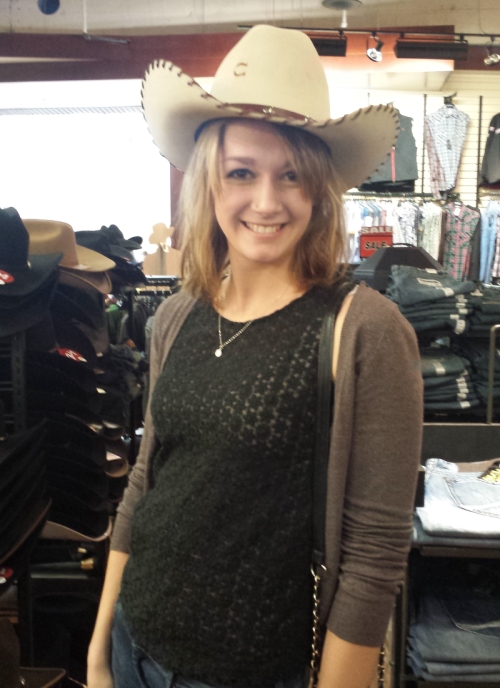 Okay so one last thing. Calgary is known for its chinooks, a warming wind known as the ‘ice-eater’ and varied weather patterns but the whole community was shocked by a particular event. During my second weekend in Canada I was enjoying the sunshine. I went river rafting on the Bow River and it was such a beautiful day. I was wearing my bikini and floating along the river with not a care in the world. The next day I looked out of my window and I was met by a mountain of snow outside. Now I am not a permanent snow hater but this sudden change in weather completely bewildered me! All that could be said for it by the locals was “Welcome to Calgary!” Thanks!

Calgary is a great city to live in, even though the University of Calgary is bordering the city. You have to get the C-train, a light transit rail system, into downtown which takes around 15-20 minutes or there are regular bus services. 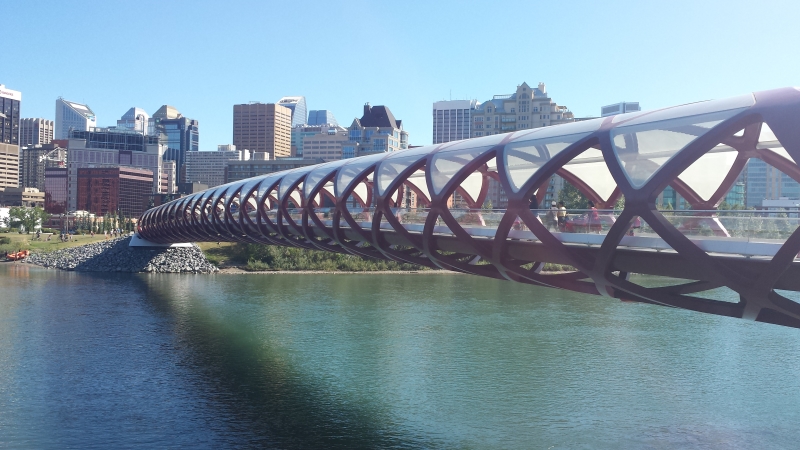 The city itself is pretty cool, bordering the Bow River. There are plenty of scenic places to go jogging along the river or sunbathing during those hot days that you still get in September. The city is also very easy to navigate around, it is based on a grid system, with logical street names. If you ever get lost just look out for the Calgary Tower, trust me, you will not miss it. 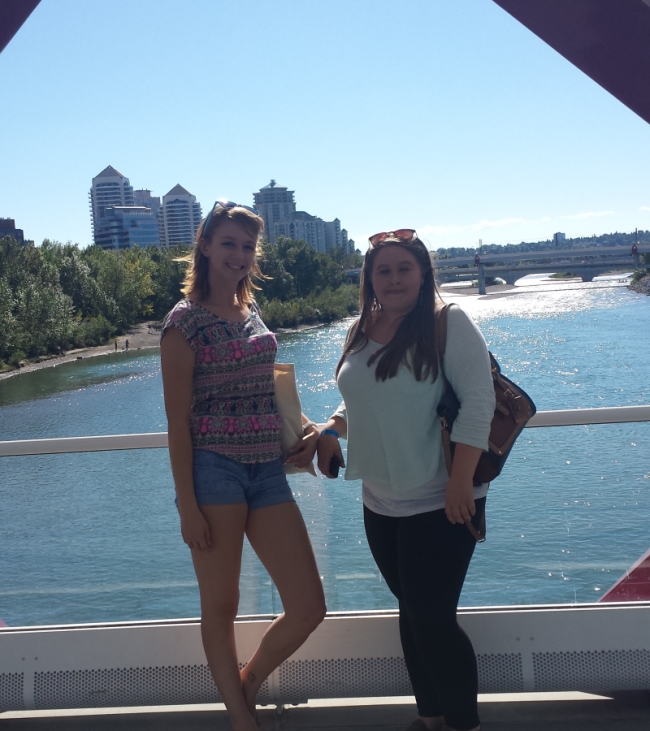 There is plenty to do, with great night life, places to eat, sports venues, shops, cinemas and more! There is something for everyone! I would consider some of my highlights to date to be river rafting down the Bow River, eating up the Calgary Tower for my 20th birthday and going to the Saddledome to watch my first ever ice hockey game.

I love my halls of residence. You probably think that as I am in North America that I am having to share a room with another girl, but instead I live in a cute little apartment that I love and we each have our own rooms! I live with 3 other girls: Liv, Charley and Jessica. We are a right fruit-salad! Liv is from England like myself, but she laughs at how I pronounce ‘raspberries’ as my accent is “Northern” apparently although I am from the Midlands. Charley is from Holland and Jessica is from Ecuador. I love these girls to bits and I am so happy with my room mates, I could not ask for better ones to be honest! It is nice not to be with Canadians in a way because as we are all new to Calgary it gives us the perfect opportunity to go travelling together! 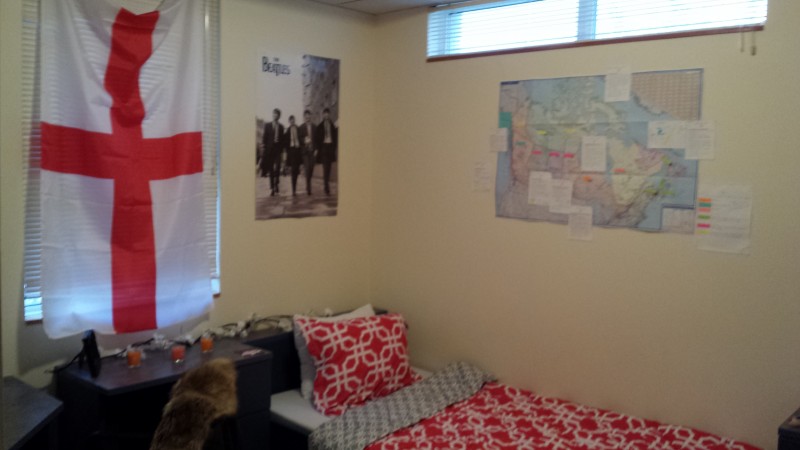 My life with my roommates consists of constantly drinking tea of all varieties (apart from PG Tips as I am awaiting for a much anticipated parcel from England to arrive) and cooking together like a communal household should do! We also like to party hard when we are not studying and hold weekly international Come Dine with Me sessions! The Brits are up next; the questions is Sunday roast or a classic mean and lean full English breakfast?

Oh and just to let you know Mum if you are reading, I am eating healthily whilst I am here and not living off fast food all of the time, I even made a salad the other day! You can avoid the fast food by making sure you live in self-catered accommodation, it is cheaper and you can easily walk or get a bus to Safeway or the Canadian Superstore for all of your groceries. It is about a 20 minute walk. Talking about the fast food though you must try Calgary’s famous chicken wings, covered in any sauce you could possibly imagine! 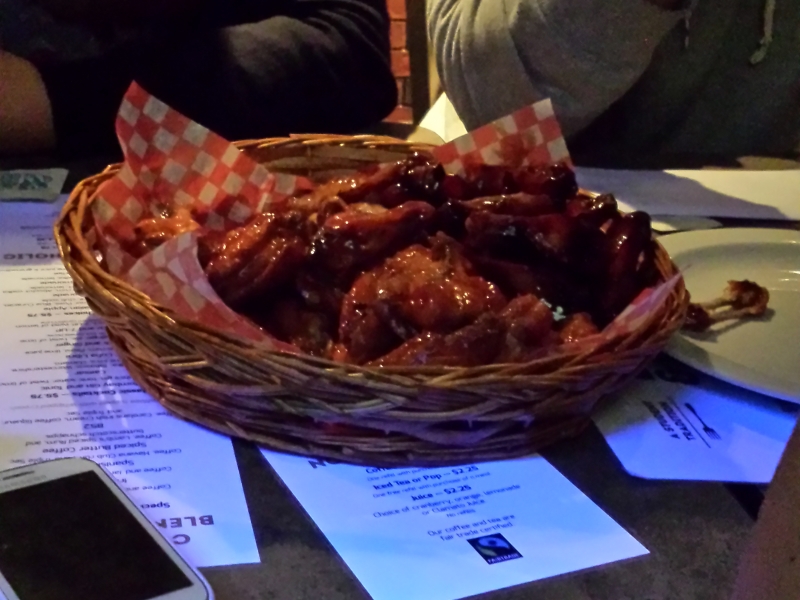 Okay so enough about where I am living and about food and cups of tea, I making myself hungry! I am guessing that you want to know more about the city that I am living in. Please see my next post!

Hello there my fellow readers,

I bet that you have been worried about me! I am afraid that I have been away from my computer screen for too long! Phew… It feels so good to be writing my blog again, it is my pride and joy after all and I do like to keep you all updated! Anyhow, I bet that you have been wondering what I have been up to this past month? Well, I don’t really know where to start… I have had one hell of an amazing month, filled with ups and no downs (apart from when I got all emotional one night because I was missing English tea bags and roast dinners but that can be easily solved).

Since touching down, approximately 30 days ago my life has changed completely upside down and for the better. I have met so many amazing people and done so many wonderful things, I appreciate how lucky I am to be here every day! Just to let you know that I am currently sitting in a dark and dingy basement waiting for my washing to be done (it is not all fun and games), but this has given me the perfect opportunity to fill you in! So come on and step on into my new world and I will let you know about the basics – the halls of residents, the city, travelling opportunities and Calgarian culture. 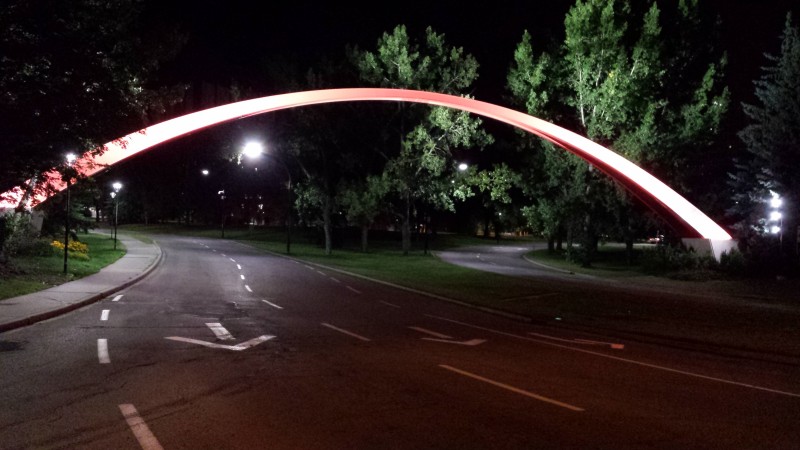 The night of my arrival!