The university itself is situated in the city on a unique campus with lots of traditional architecture and a huge library with over 13 floors. It is a massive campus which is not surprising when you consider the fact that U of T has over 80,000 students. As the university is divided up into colleges, many have their own smaller libraries, which I often used for studying since they were nice and quiet.

I was initially surprised with the university’s lack of interest in sport as I assumed being a university of 80,000 students that the sport culture would be really alive and vibrant.  For sure there are football clubs, a boxing club which I joined and gym classes available to students but I must admit it wasn’t quite as I had expected. Perhaps this is because U of T is such a heavily academic institution. Nevertheless there are still plenty of opportunities to join clubs, I played for the exchange student football team and joining the boxing club allowed me to meet lots of new people. Clubs and societies are one of the best ways of meeting people and I am glad that I managed to get involved. This semester I am hoping to try out some new activities. I joined the Ski club in December and this semester I will be heading to Quebec with them on a 4 day skiing trip during reading week which I am really excited for! 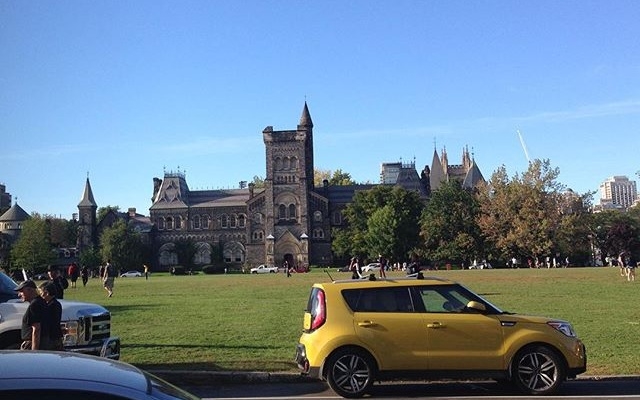 Back at Lancaster I really enjoyed going to the gym and luckily for me there are three different gyms on U of T’s campus which are all great to work out in as a break from studying; I tend to go to the athletic centre because it is nearest to the majority of my classes. However there is the Hart House gym which is located in a very old, traditional building near University College which seems quite bizarre at first but is really cool. The other gym is next to the Varsity Centre which I haven’t yet tried but it looks very nice and modern.

No doubt, the workload in Toronto is more than what I was used to dealing with at Lancaster and there were a few times when it was difficult to balance work with my social life, particularly towards the end of the semester with finals. However there is certainly time to have fun and it’s really important to try and find a good balance. The way that my modules were split up into midterms in October and finals in December was good since I was learning continuously as opposed to just cramming for finals (like was often the case at Lancaster). Well, that is my positive way of looking at it!