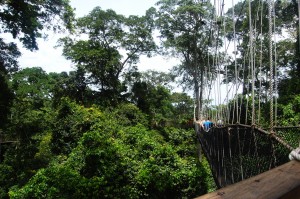 For a group of lethargic university students, still suffering from the adverse effects of the cuisine from the day before, I think we should have been applauded for our efforts to be ready and waiting for the bus to Cape Coast at 6am. An hour and a half later, after several extra trips to the breakfast buffet and countless re-applications of deet and suncream, our bus arrived. Pretty punctual by some standards. After a five hour drive, and a communal bonding trip to one of the most unsavoury toilet facilities I have ever experienced (worse than our library toilets!), comprising 3 tiled walls, no drainage system or doors and a complementary fro

g, we arrived at Kakum National Park. After the dry heat of Accra, and the air-conditioned bus, the humidity hit us even harder than the complementary local shots we sampled at Republic Bar the previous Tuesday. It was intense.

Drenched in an unholy amount of insect repellent and sweat, we ascended the steep incline up to where we would start our canopy walk. After being overtaken by three young school parties, we reached the starting base for our walk: a wooden base with swaying rope bridges suspended 130 feet above the ground. 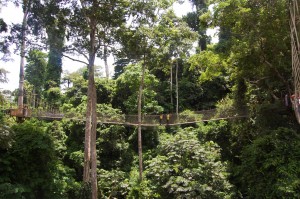 Stepping tentatively onto the bridge I realised that if it collapsed I would fall 26.2 times my height through a lush evergreen canopy past the 400 species of butterflies and 200 species of birds and reptiles to my imminent death, where I would probably be cleared up by one of the 40 different species of mammal that abide in the park. A comforting thought. My vertigo was quickly overcome, however, by the phenomenal views from the walkway, from which you could see the canopy below, a variety of butterflies up close, and some of the taller trees standing proudly along

side us at 60m tall! On our way back down through the jungle we were reunited with the multitude of school children, eager to introduce themselves and chat about how much they’d enjoyed the scary walk. For just one cedi – 20p – we could buy a freshly machete’d coconut to rehydrate ourselves, which makes one rather bitter about paying £4 for a carton in Sainsbury’s.

The door of no return

After another long drive through the countryside’s astoundingly contrasting greens, oranges and reds, we arrived at Elmina where we were to visit the Castle. The building was originally erected by the Portuguese in the 15th century as a trading port, before a lucrative slave trade was established, continued by the Dutch who took over and subsequently the British. It was heart-wrenching to learn of the atrocities inflicted upon the people of West Africa who were trafficked over the period of half a century in their millions by the Europeans. We saw the dingy cells that would host hundreds of people at a time, and perhaps worst of all, the ‘door of no return’. The individuals that survived their 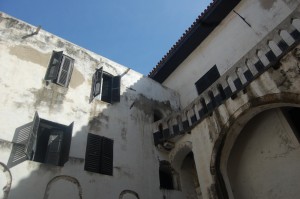 weeks or months in captivity would be filed through the door to slave ships bound for Europe and the Americas, a journey which only one in three of them would survive. After the harrowing tour of the castle we continued up the coach for dinner at a hotel and a final beach trip as the sun set. 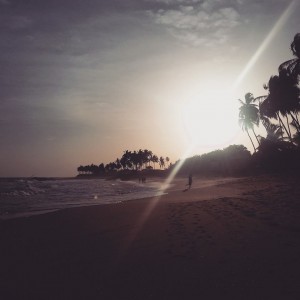 On our last morning we were able to explore a local craft market, where we could fine-tune our bartering skills and fill our suitcases with jewellery, clothes and souvenirs. After proudly displaying our ‘bargain’ finds to some of our LU Ghana friends, we discovered that we had been completely ripped off and charged ‘Obroni’ (foreign person) prices, paying at least 4 X the products’ worth. We weren’t too concerned by this, as the prices we paid were still cheap, and we were pleased with our finds! After a final meal at the hotel, we had to say goodbye to Jemima and Stan, who had been our rocks throughout the trip, heading off into the night for our return to rainy Blighty… 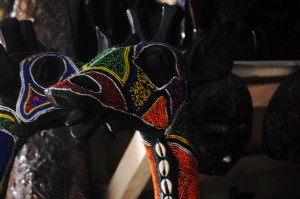