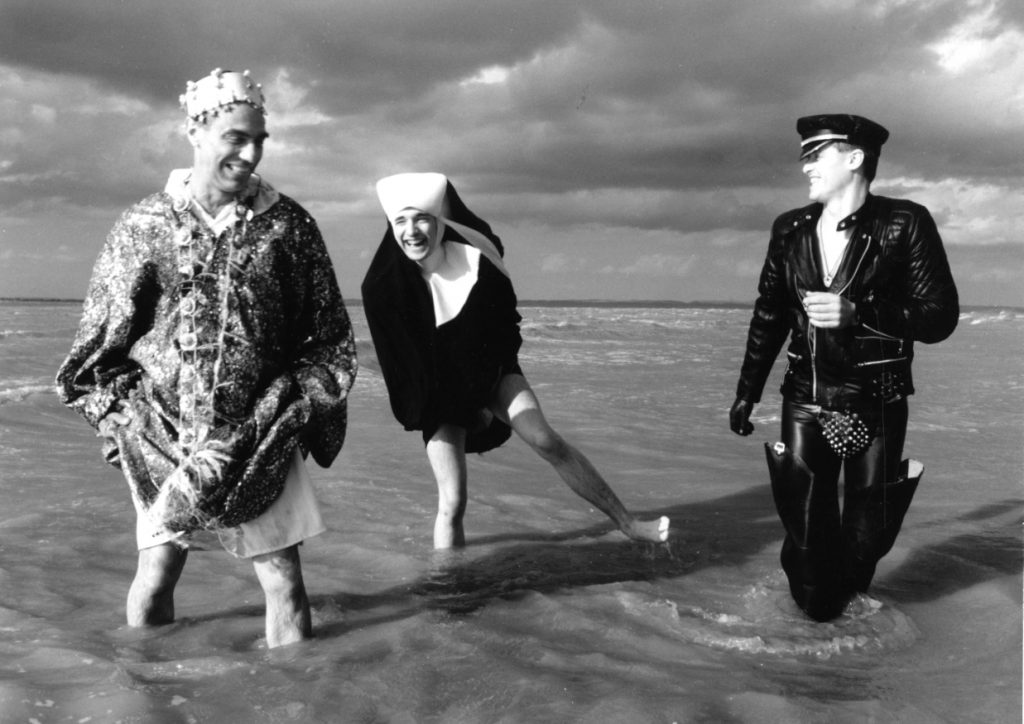 It is May 23rd 2019 and I’ve invited Sister Belladonna, one of the founders of the London House of the Sisters of Perpetual Indulgence, aka Dr Mark A. Spencer, to my bona bijou lattie. He’s agreed to dish the dirt on the day when he and other members of the Sisters of Perpetual Indulgence used “High Polari” to canonise the film director Derek Jarman in 1991, as shown on the front cover of the book. During the decades up to this point, Polari had been seen as silly, apolitical and politically incorrect. Jarman’s canonisation was to change all that. It was reported by the academic Ian Lucas (who was also one of the Sisters), and this led to the rediscovery and reappraisal of Polari. Without this ceremony, the book would never have been written. Jarman, who died of an AIDS-related condition a couple of years after the picture was taken, said that the canonisation was one of the happiest moments of his life. The Sisters showed how Polari could be used for political purposes, providing both gravitas and camp – in a spiritual ceremony to celebrate members of the community, during one of its darkest times.

Tell me a bit about the Sisters and what they stand for?

We’re gay male nuns – the pronoun is “he” – so we are not about being a drag persona, which kind of wigs people out. I’m a big fan of drag and appreciate its power. The concept behind the nuns was, in part, a critique of gender roles and identity and power structures telling you what you can and can’t do: if I say I’m a nun then I’m a nun. We also had lesbian friars and a Jewish nun. It is also about having loads of fun in a habit. We weren’t specifically anti Roman-Catholic. But Catholicism is such a pervasive influence in terms of controlling identity, that the visual imagery of nuns is a powerful means of challenging perceptions. The idea behind perpetual indulgence came from the Middle Ages, the church used to sell indulgences so that people could be absolved of their sins (& make a lot of money on the side). We granted perpetual indulgences, the idea of charging people for something that is non-existent is ridiculous, so the Sisters ‘grant’ a free, perpetual indulgence. The London House was driven by intersectional left-wing liberationist politics – many of us went on the Gulf War and various anti-Nazi demonstrations in habit.

Speaking of which, where did you get the fabulosa nun’s habit from?

Being a Sister came with certain expectations and lots of people wanted to join, so we said, “If you want to join, you have to make your own habit!” I hand-stitched my own habit myself. Mother Mandrago and I sat up for hours in our squat in Hackney doing it while consuming huge amounts of caffeine, eating cheesy baked potatoes and smoking cigarettes. My bandeau [the strip of cloth which secures the coif or headpiece in place] was so high it had the lid of an ice-cream carton in it to give it a bit of stiffness, because, frankly starch just doesn’t work, not for that height! 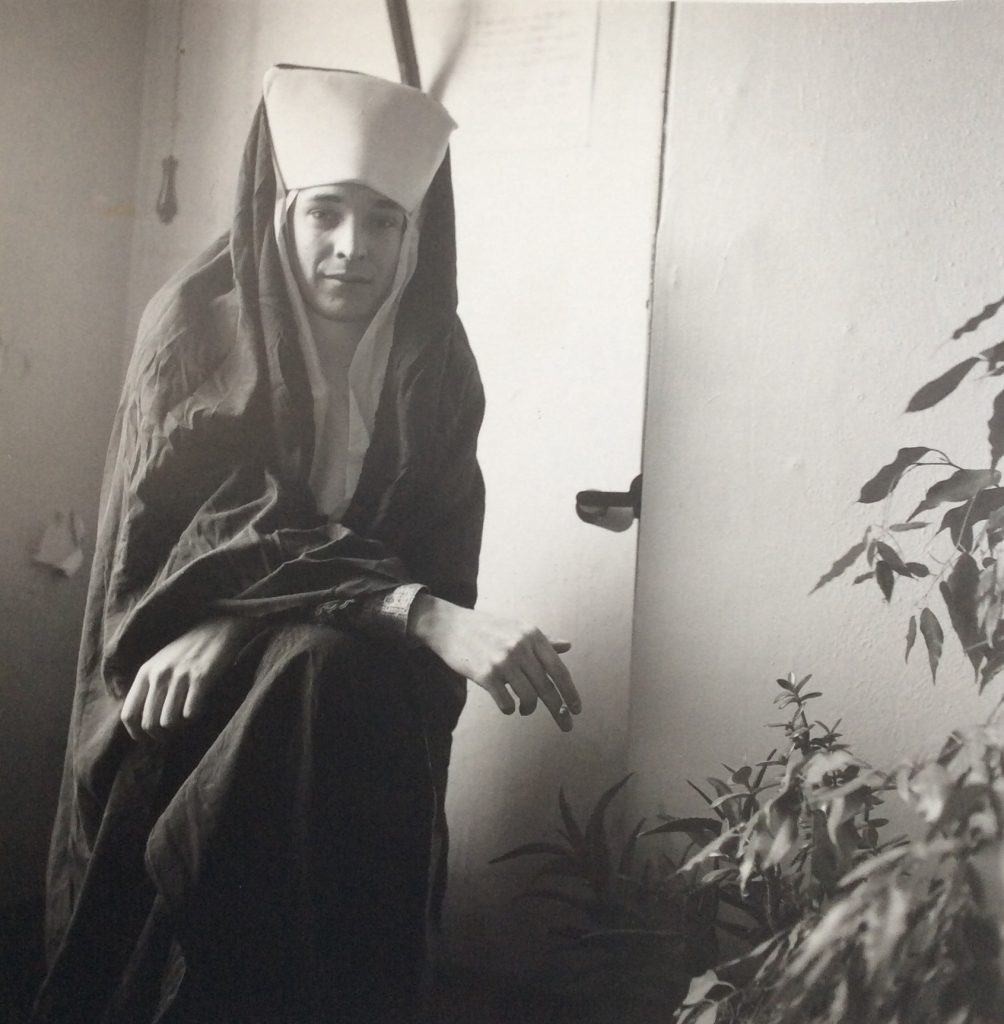 How did you become Sister Belladonna?

My full name is Sister Belladonna in Glorie de Marengo. I’m a botanist and I didn’t want a name that was overtly sexual – I liked the air of respectability (it was only an air). Belladonna is a very poisonous plant (deadly nightshade) and Gloire de Marengo is the name of a variety of ivy. So, I’m Sister Poison Ivy. I got involved in the world of gay politics, first with OutRage! and then gravitated to ACT-UP and the Sisters. Before that time, I’d been involved in the anti-poll tax movement (I was one of those arrested during the infamous Trafalgar Square Riot. I was arrested for trying to avoid getting my head kicked in by the police). I started volunteering and became a staff member at the London Lesbian and Gay Centre. In the autumn of 1990, Sister Ethel Dredds a Flashback, one of the Sisters from the Sydney House in Australia met several of us at the OutRage! Kiss-in by the statue of Eros in Piccadilly Circus. It was initially me, Mother Mandragora Salacious in Purple, Sister Frigidity of the Nocturnal Emission, Sister Immaculata, Sister Gloria Sick Mundis, and Sister Jack-off all Trade and one or two others, then later on Sister Dominatrix des Hommes and Sister Moses of the Parting Cheeks joined. Our first activity was a march with Outrage to protest arrests of gay men at the Coleherne Pub on the 3rd December 1990.

Was there an initiation ceremony to become one of the Sisters?

Yes, Sister Ethel officiated over mine. I did it naked, Fridge pretended not to look but I saw him peek! A smoky handbag (thurible) was swung around and some words of nonsense were spoken! We held most of our nuncheons (nun meetings) in a flat belonging to Fridge and Gloria, that they called the Ziggurat of Your Anus. First, I was a novice, then I took on the role of a Sister. Some of the American houses are quite strict about being a novice for a year but as we were quite anarchic, it was more of case of “Bored of being a novice, I’m a Sister now!”

What did you think of Derek Jarman, who’s next to you on the book cover?

I went to his flat in Tottenham Court Road a couple of times, I didn’t know him very well, but I was fond of him, he was very charming, a charismatic man, he had a presence about him, and people gravitated towards him. He invited the Sisters and Outrage to appears as rioters in his film Edward II. Outrage got into a pickle because some of their members decided to do an impromptu action against Cliff Richard who was in the next studio.

One of the other London House Sisters, Fridge I think, asked Derek if he’d be our first saint (the idea of ‘saints’ was to acknowledge the contribution that a person had made to our community, after all most of us would never receive a ‘gong’ from HMG). Straight away he said, “I’ll do it”. I made the crown for him that he’s wearing in the photo, I think he got the gown himself. Sister Fridge largely wrote the ceremony with Sister Jack-off and Mother Mandragora, and we each had our own section of the ceremony to read. The ceremony itself was magical. Towards the end we ‘had to’ take Derek into the sea and dunk him to baptise him, which also gave me a golden opportunity to have a grapple with the biker with the leather trousers. 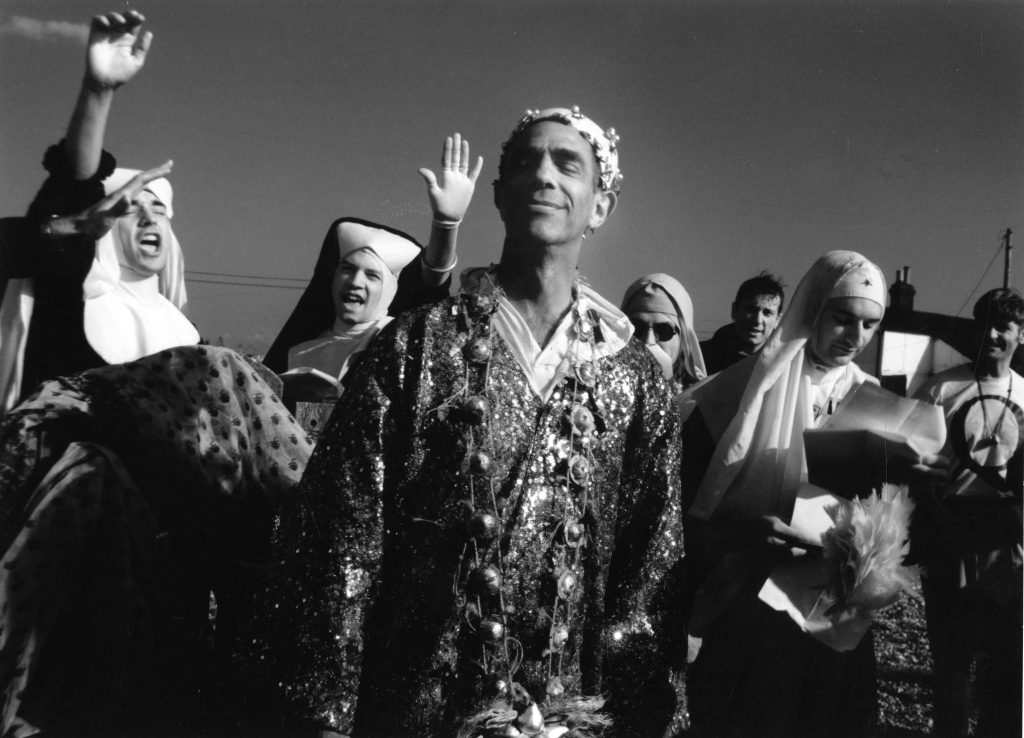 How did members of the public react to you as a Sister?

It was an extraordinary vehicle for breaking through people’s pre-conceptions about what queers were like. At the first Gulf War demonstrations we went on, you could see people looking at us, thinking “what the fuck is that?” we had placards that said “Give Head not Arms” and “Take Men to Bed, not to War”. Initially the other demonstrators were a bit shocked but bit by bit, they came around and gravitated towards us, they felt safe in our presence. Even though we were naughty and ‘inappropriate’, we were very respectful of who they were, we were a kind of focal point for them. We started to garner quite a lot of respect and love and by the end of the marches, there would be 300-400 people, grannies come down from Yorkshire, waiting to march with alongside us. The act of being in a black and white penguin suit challenges people brains, particularly when they see you’re a man. And in that moment of utter confusion, people’s guards go down and they let you be something that they wouldn’t expect. It’s quite a powerful moment. You’d get really weird experiences happening. I remember coming back from one of the Gulf War demonstrations, walking through Piccadilly still in my full habit. I was alone, and this man came up to me and started screaming, waving his fist in my face going “You’re disgusting, you’re disgraceful!” I’m bracing myself for a typical run of homophobia, but what had annoyed him was the anti-Gulf War badge, not the fact I was dressed in a habit. 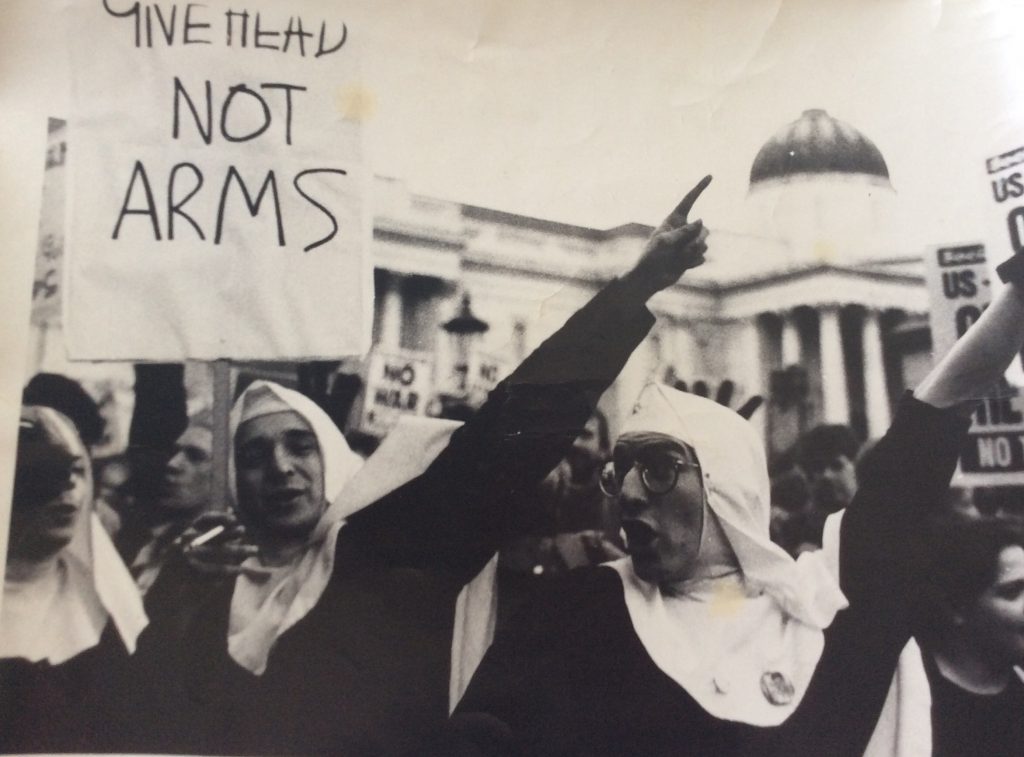 What about reactions from people on the gay scene?

It was also powerful internally in the community. Quite often we’d have people coming up to us who were devastated in different ways. I was in the Coleherne one evening with Sister Fridge and this man came up to me, and he started crying – nearly all his friends were dead, he was probably going to die too. And me and Fridge just sat talking with him about his life, and you could gradually see him perking up. After an hour or two he said thank you and then he got up on the stage and started dancing, it was a really powerful moment. Another time, at a club, a quite tough skinhead lesbian came up and started laying in to me, telling me we were disgusting, evil, how dare we do this! Her story was that she had been abused and victimised by nuns and was utterly traumatised by them. So I just absorbed this for about an hour, and bit by bit her anger floated away and by the end of the evening she was hugging us and she remained one of our biggest fans for years, and said quite regularly how cathartic it had been to meet us. The Sisters were not just this political vehicle for banging tubs and being annoying but for impacting people. We opened doors in people’s heads and they found something completely different.

How did you all find out about Polari?

Sister Fridge was one of the theatre boys so he got it as a result of being through there. But one of the things about being at the London Lesbian and Gay Centre was that it was a kind of haven for all sorts of people, including a group of old queens who were entertaining characters. One of them, an East End queen, talked to me about what it was like to be gay in London in the 1950s and 1960s, and he was a native Polari speaker. He told me about H-P-arlying, a form of Polari that he and his buddies used to do. They differentiate between West End and East End Polari. If you were in a community with other gay men who you knew and you didn’t want other gay men to understand, you would take certain words, mainly nouns, and you would attenuate the word to the first letter and put “arly” on it. So you would make the whole sentence unintelligible. For example, “Veealri the H-Parli with the leearlyarlies”. [I think this means “vada the homee with the lallies” or “look at the man with the legs”] There was a certain rule, I’ve forgotten it. I was moderately good at it for a while but it was tough, you’ve got to be thinking. Being around that community of guys, they taught us a lot. One of the members of Outrage produced a mini-dictionary around that time too. 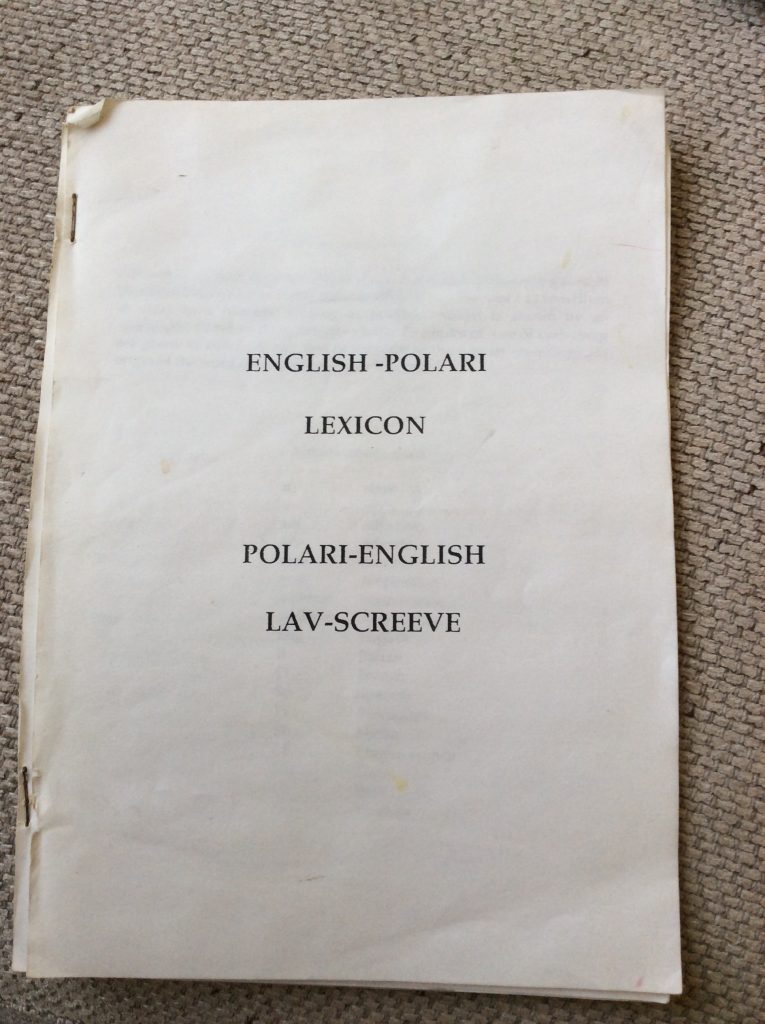 Do you still identify as a Sister today?

Even though I’m not active as a Sister now I feel that I’m a “resting nun”. 1986 to 1996 was such a tense, toxic and dynamic period in lesbian and gay politics that at the end, so many people just collapsed, physically, mentally. The life was drained out of us, but it was an amazing time! Despite the major fights and long-held grudges, I am very proud to have been part of that community of a few thousand people who fought for LGBTQ+ lives at that time. 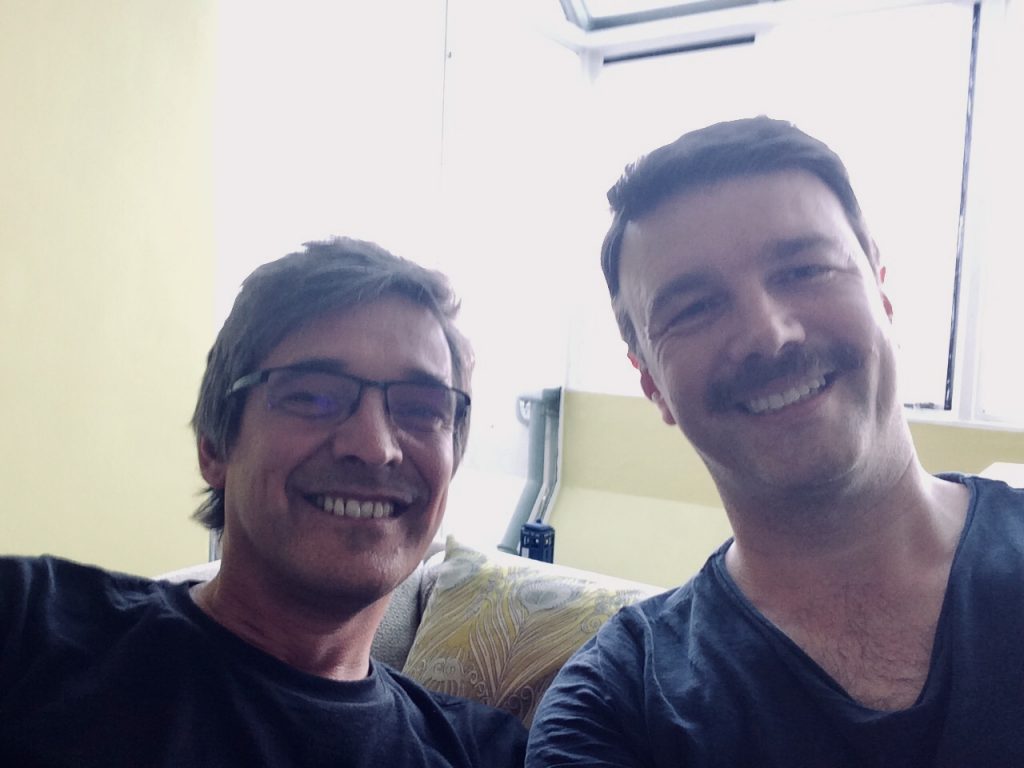 Dr Mark A Spencer (Sister Belladonna) and Paul Baker, May 2019.