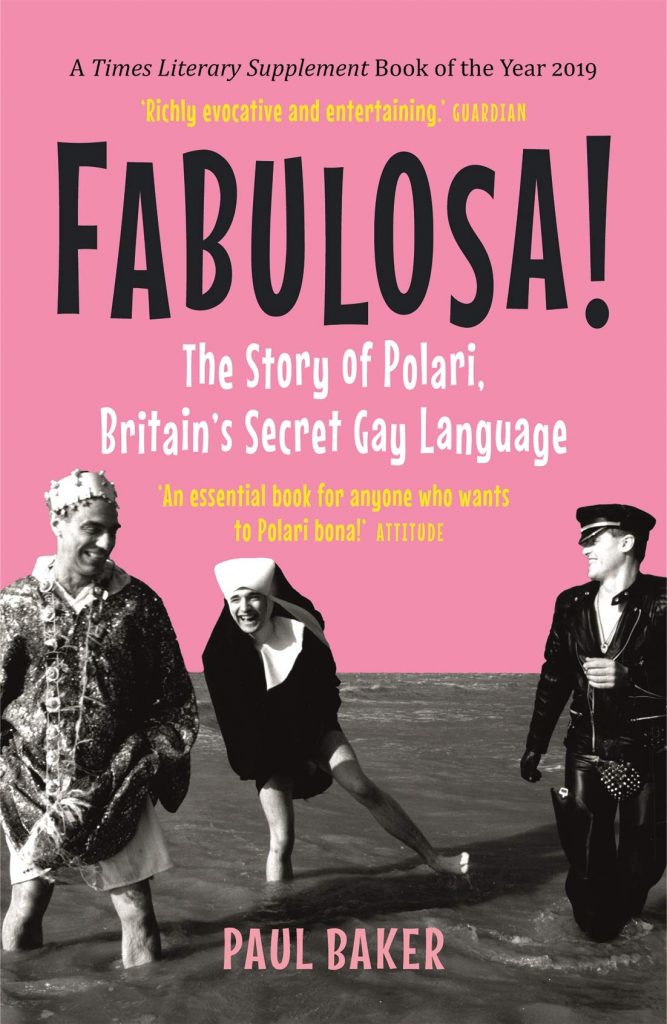 Fabulosa! The Story of Polari, Britain’s Secret Gay Language is published by Reaktion Books. Use the code FAB20 at their website to get 20% off.

A Times Literary Supplement Book of the Year 2019.

Order here from Amazon (UK), Amazon (US), Waterstones, WH Smiths or the Hive.

Polari is a language that was used chiefly by gay men in the first half of the twentieth century. It offered its speakers a degree of public camouflage and a means of identification. Its colourful roots are varied – from Lingua Franca to dancers’ slang – and in the mid-1960s it was thrust into the limelight by the characters Julian and Sandy on the BBC radio show Round the Horne (‘Oh Mr Horne, how bona to vada your dolly old eke!’). Paul Baker recounts the story of Polari with skill, erudition and tenderness. He traces its origins and describes its linguistic nuts and bolts, explores the environments in which it was spoken, explains the reasons for its decline and tells of its unlikely re-emergence in the twenty-first century. With a cast of drag queens, sailors, Dilly boys and macho clones, Fabulosa! is an essential document of recent history and a fascinating, fantastically readable account of this funny, filthy and ingenious language.

‘Shot through with his nicely dry wit, this is a fascinating and important study.’ – PATRICK GALE

‘Glorious! This fascinating account of Polari, the Lost Language of Queens, is utterly absorbing. It’s history at its best: alive, vivid, fluid, warm, human and humane, and it gets as close as any book I’ve read to penetrating the mystery-wrapped-in-an-enigma that is camp. Not just fabulous. Not just fabulosa. But completely fan-tab-u-losa!’ – NEIL MCKENNA

‘Vada this! By turns deeply edifying and hugely entertaining and unusual for succeeding at being both – a future classic!’ – DAMIAN BARR

‘Brilliant, readable nonfiction is out there too . . . for those who want to be in the know, Fabulosa! The Story of Polari, Britain’s Secret Gay Language by Paul Baker (Reaktion) is a compelling history of the linguistic lengths to which gay people had to go to hide in plain sight within an aggressively homophobic culture.’ – THE OBSERVER

‘LEAD BOOK REVIEW: Baker’s intriguing and often amusing book is the work of a writer interested in language who has been led by his subject to think about social oppression . . . [he] writes well about the milieux in which Polari flourished – the theatre and the merchant navy. He is especially acute on the political uses of vulgar innuendo . . . And Baker’s interviews radiate warmth and good humour.’ – THE SPECTATOR

‘Baker intersperses his account with snippets of interviews with Polari speakers, whose first-hand recollections are invariably arresting and funny. He is partial to a spot of innuendo himself, and manages to slip one in every now and then . . . [T]here is some evidence that the language persisted into the 1980s and ’90s in theatre circles, and it continues to enjoy a healthy afterlife as a cultural curio – of which this delightful book is just one manifestation.’ – THE FINANCIAL TIMES

“Though a language smacking of Carry on films and saucy seaside postcards, it’s the tragic torment and harassment that gave rise to Polari in the first place that must not be forgotten and that is why this book is important.” – DAILY MAIL

‘For anyone interested in finding out more about Polari—Britain’s ‘secret gay language’, Fabulosa! Provides a thought-provoking look at how the language came about and fell in and out of favour with the gay community from the days when homosexuality was illegal. Academic Paul Baker details how Polari was based on a mixture of sources, including the common sailors’ language of lingua franca and thieves’ cant.’ – I NEWSPAPER

“Book of the Month: A funny and joyous insight into the story of Polari…. This is an essential book for anyone who wants to Polari bona.” – ATTITUDE MAGAZINE

“Paul Baker’s exuberant, richly detailed history of Polari, a ‘secret’ language used chiefly by gay men in the 1940s and 1950s is a delightful read.Baker traces its origins and uses, bringing in accent, grammar and word coinage (to help readers polari bona), littering his account with amusing nuggets – like the fact that there’s a Polari Bible translation.”  TATLER MAGAZINE

‘Baker tells the history of Polari with pride, passion and humour, making clear that camp can be ‘deliciously political’. Fabulosa is an important celebration of Polari’s message – which is about laughing at your flaws, creating hope from tragedy, and seeing humour in the face of cruelty’ –  LONDON MAGAZINE

The historical overview of the lives of gay men in twentieth-century England—particularly the 1940s–60s—is commendable. Baker offers well drawn sketches of life on board cruise ships, in bars and cabarets, and in dark corners of London to paint a picture of what life was like then for the new generation of the LGBT community. Recommended. CHOICE

“[Baker] is especially strong on the changing attitude towards polari within the gay community in the 70s and 80s, and on the important reclamation performed by the The Sisters of Perpetual Indulgence. While the subject of Julian and Sandy is well-trodden ground, his approach feels fresh, and the personal interludes add to the narrative without being overly intrusive. Fabulosa! is also an excellent primer for would-be polari speakers.” – MINOR LITERATURE[S]

‘Fabulosa! is important, informative and engaging. A multifaceted foray into the roots, uses and contexts of Polari is hardly something you see published very day . . . it makes for informative and entertaining reading.’ – MEDIUM

‘Parts delve into language technicalities but still retain interest, and Baker does not shy away from tackling gender politics and race issues of some of the terms, interweaving his own experiences to shine a light on the interplay between language, community and society.’ – NORTHERN ECHO

‘For anyone interested in finding out more about Polari, Fabulosa! provides a thought-provoking, in-depth look at how the language came about and fell in – and out – of favour with the gay community.’ – THE BELFAST TELEGRAPH

‘A riveting, funny and joyous insight into the story of Polari.’ Gay’s the Word Bookseller Picks 2019

One of the Best Soul Reads of 2020: ‘It’s the Lancaster University professor’s embrace of Polari’s complexities and messiness that makes this book such a bona read. And what a denouement. After an undignified death, the language enjoys a fabulous afterlife that peaks in Manchester.’ – NORTHERN SOUL BOOKS 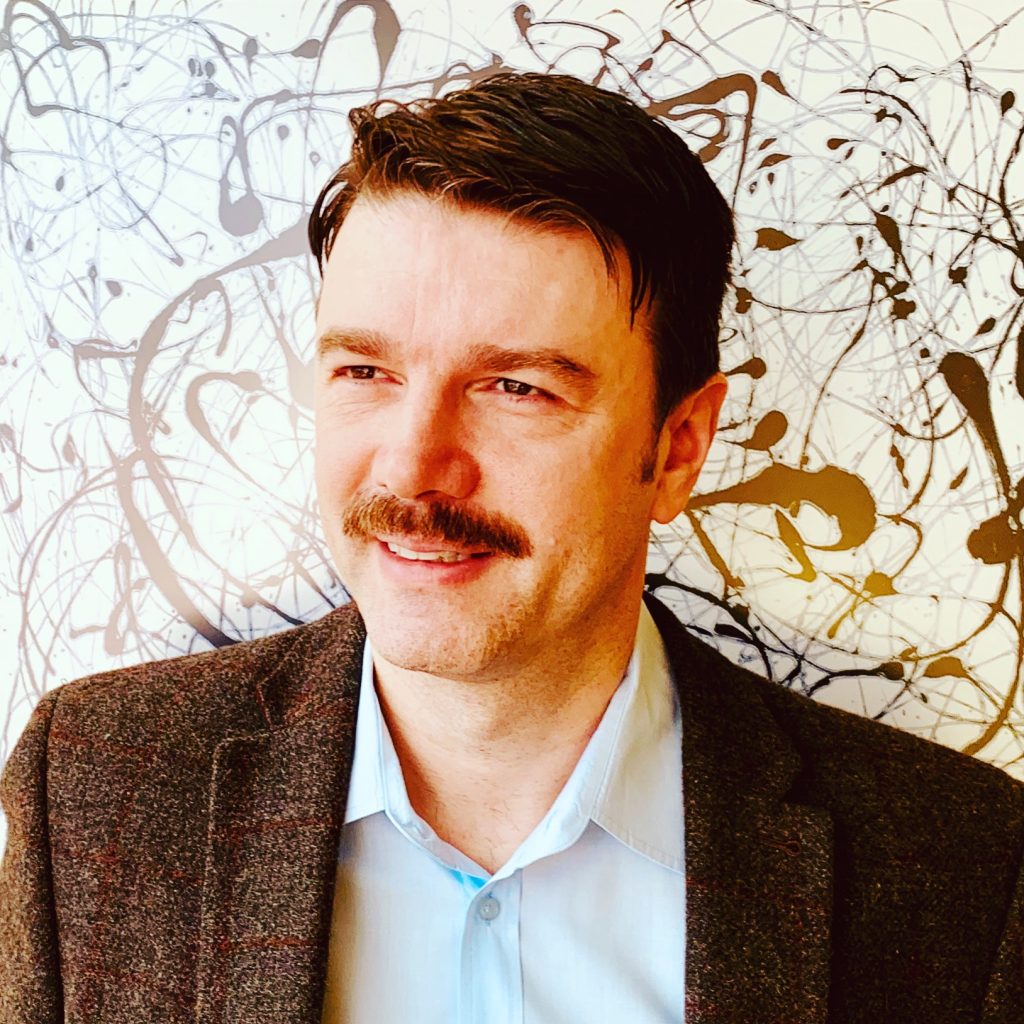 Paul Baker is Professor of English Language at Lancaster University. He has written eighteen books, including American and British English (2018) and, with Jo Stanley, Hello Sailor! (2003). He regularly gives talks and workshops about Polari and is a Fellow of the Royal Society of Arts and a Fellow of the Academy of Social Sciences.

Read the first couple of pages below:

Picture it. London, 1953, the A&B Club in Rupert Court, Soho. It is Saturday night, just gone half ten, and there’s a sudden surge as the chorus boys make their entrance and everyone looks to the door. Many of them are still in stage slap while a few others, like Bobby (Gloria to her friends) have added a bold bit of blue eye shadow and rouge to their ekes. They have climbed the stairs to the third floor and knocked to be let in, arriving in twos, threes and fours, parting the fug of vogue smoke, camp little things in tight colourful clobber, gossiping in Polari most bona, luppers flapping around like windmills, oblivious to the effect that they’re having on the scattering of respectable and slightly awkward looking middle-aged omees who have been waiting for just this moment. A couple of off-duty Guardsmen have pitched up in a corner. One, Teddy, is an old hand at this – he’s been coming here for a few months now – introduced into the game by an older friend. It’s a marvellous way to fill out your packet – catch the eye of anyone who’s not completely cod, make a suggestion to take things elsewhere, then he just has to stand in an unlit alley (or sit or even lie back, if the chap’s brave enough to take him back home), get plated and earn a few measures in the process. Willing for a shilling – nothing wrong with that. Except the last time, the omee wanted to have it up the dish and offered a lot more, so he thought well why not and gave it a go. And after the first minute, when it stopped hurting, he decided he quite liked it. Have you got any friends the man asked? There’s multi dinarly if there’s two of you. So Teddy’s brought Arthur along this time – only 19, blushes if anyone vadas him – he’s been bright red all night. Trouble is, this might have been a mistake. Arthur’s getting a lot more attention than anyone else in here.

There’s a sudden dip in the din but then it doubles in volume as a bona fide Queen of the Screen comes in. So the rumours are true! She’s with a couple of feely omee-palones who must be half her age. Someone tells Gloria that the Screen Queen’s been caught with her lally-drags around her ankles at that cottage in The Dilly aka The Meat Rack but her savvy manager’s kept it out of the papers somehow. She’s playing it like she’s the Snow Queen but her orbs are darting round at all the bona omee-palones when she thinks no-one’s vadering. And yes, she’s just clocked Arthur. There’s some discreet palarying to one of her consorts and he’s been dispatched to where Teddy and Arthur are standing – a request for an audience with her gracious Majesty! Arthur practically spills his bevvy in excitement. “Say hello to your mother!” says the Queen, holding out her hand graciously. “And oh, won’t someone parker her a Vera!”

This is a book about the story of Polari and the people who spoke it – mostly camp gay men. They were a class of people who lived on the margins of society. Many of them broke the law – a law which is now seen in civilised societies as being unfair and cruel – and so they were at risk of arrest, shaming, blackmail and attack. They were not seen as important or interesting. Their stories were not told. If they were ever represented in books, films, plays or songs, they were usually given tiny supporting roles, and the audience was not supposed to identify with or root for them. In the rare cases when they did appear, they were often implied to be silly or sinister, victims or villains. So because of their criminal status, they learnt to speak in an unfamiliar tongue – their voices changed out of recognition so that they could not be understood by others. This is a book which gives them a voice.