George Leybourne/Champagne Charlie: 19th Century Music Hall Performer and song writer, Leybourne’s act was a parody of an upper-class toff (known as Lion comique), kitted out in top hat, white tie and tails, impressive moustache and cane, he co-wrote the drinking song Champagne Charlie in 1866, which became his stage name. The same year he wrote “The Daring Young Man on the Flying Trapeze” which in the third verse contained fairground slang associated with Parlyaree, the 19th century precursor to Polari: “This young man by name was Signor Bona Slang”. (Bona Slang means Great Performer). Another of his songs contains the Parlyaree line “Varder me nibs parladering’ (which possibly translates to “look at him talking”).

Eric Partridge: A lexicographer who wrote over 40 books on the English language with many works on slang and word origins, charting the language of circus people, itinerant actors, tramps, costermongers, music-hall artists and prostitutes. He wrote an essay in 1950 called Parlyaree, noting that it is also known as Parlaree, Parlarey, Parlary or Palarie, while in 1970 he notes (a little late) that “gay slang has come to be known, in raffish, homosexual circles, as polari“.

Quentin Crisp: One of the ‘stately homos of England’, Crisp hung out in Soho in the late 1920s and early 1930s, occasionally selling sex. In his autobiography, The Naked Civil Servant, he describes the conversation of the Dilly Boys (a Polari term for the men who worked as prostitutes around Piccadilly Circus): ‘Isn’t it terrible tonight dear? No men about. The Dilly’s not what it used to be’. Although Crisp does not acknowledge Polari in any of his autobiographies, in the televised version of his book, John Hurt, who plays him uses the Polari word rough in the phrase “Some roughs are really queer and some queers are really rough.”

Kenneth Williams: Comedy entertainer and ranconteur, Williams used Polari as a code in his diaries in the 1940s when stationed in Hong Kong and Singapore: “Sent up silly by seaweed outside the building – gay place this”, “Met 2 marines – very charming. Bonar Shamshes.” Two decades later, Williams played Sandy in the radio comedy series Round the Horne, introducing Polari to the British public with his catch-phrase “Ooh, how bona to vada your dolly old eek!” Williams used his knowledge of Polari to be ruder than the script writers intended to be, and bamboozled them with phrases like “order lau your luppers on the strillers bona” (come play something nice on the piano).

Lee Sutton: “Your lallies look like darts, and you’ve got nanti cartes, but I love your bona eke”. One of the most adept and creative Polari speakers, Sutton joined the RAF in the Second World War as a flight mechanic where he got involved in putting on performances for the forces. He was posted to India where he wrote shows for the troops and staged military entertainment for hospitals and convalescent homes. Returning to the UK he performed a drag act in pubs like the Union Tavern, using Polari in many of his jokes and songs. His pièce de resistance (that’s your actual French), was Bona Eek, an increasingly cruel parody of Baby Face. Sutton gave a translation of the song in its second half, but purposefully misled the audience for further comic effect. 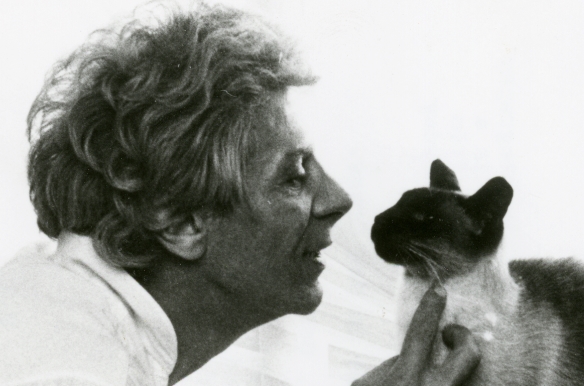 Lorri Lee: “Well, what is a queen?” After World War II the indominable Lorri was lured into a shipping agency by some bona trade and decided to sign up. Becoming a sea queen, with his penchant for alluring sailors to their doom, he soon earned the nickname Lorelei which no-one could pronounce, hence he became Lorri Lee. Years later, back shoreside, he had a drag act and was the subject of the 1981 BBC documentary Lol: A Bona Queen of Fabularity. Highlights include Lorri giving a lesson on the many the sub-categories of queen (black market queen, blob queen, cottage queen etc) and chastising two girls for laughing at him while buying make-up in a department store “Ere’ you ain’t taking the piss out of us are ya? I get paid for making people laugh and I object to you two having it for nothing!”.

Hugh Paddick: Stage and film actor, Paddick had multy bona Polari as Julian alongside Kenneth William’s Sandy in the Round the Horne radio comedy sketch show. In 1971 he starred as a very camp Robin Hood in the comedy film Up the Chastity Belt, who leads a troupe of gay ‘merry men’. In one scene Robin denies that he robs the rich and gives to the poor, saying, “You must be joking, [we] keep it all ourselves, how do you think we get all this bona drag?” Co-star Kenneth Williams had nothing but praise for him, writing in his diary of Hugh’s kindness, subtlety and brilliance. Check out his supporting role as a rather fey sitcom director in The Killing of Sister George.

Bette Bourne: An actor who became a member of the Gay Liberation Front in the 1970s, living in a gay commune in London. He formed his own cabaret troupe Bloolips which featured songs like Let’s Scream Our Tits Off. He also played Quentin Crisp in the play Resident Alien. Interviewed about Polari, Bette said “You never thought, ‘Oh God I’m so oppressed I can’t speak about myself,’ you just did it. You just slipped into it [Polari] without even thinking really”

Dudley Cave: “[Polari words] were secret passwords. You could identify with other gay people if you thought they might be – you could drop a word in like ‘camping about’ or ‘I’m going camping, but I’m taking my tent’”. Cave served in the Royal Army Ordnance Corps during WWII where he became a POW in the Far East, surviving malaria and losing more than four stone in weight. After the war he was sacked from his job as a cinema manager for being gay and went on to help launch Gay Switchboard and set up the Gay and Lesbian Bereavement Project as well as challenging the British Legion’s refusal to acknowledge and accept gay and lesbian people.

Phil Starr: “Stompers, poppers, anything you wish, you can have a blow job or have it up the dish!” A stalwart of the Union Tavern in Camberwell and manager of the Two Brewers in Clapham, Starr regularly incorporated Polari into his acts, including a rather interesting reworking of the lyrics of the old Chester, Morris and Ford song The Old Bazaar in Cairo.

Peter Burton: Journalist for Gay Times, Burton has written about Polari several times. In 1979 in a Gay News article called ‘The Gentle Art of Confounding Naffs’ he notes how words from the drug subculture of the 1970s (randy comedown, blocked, dubes) had found their way into Polari, and how he and his flamboyantly dressed friends used Polari as a way of confounding the disapproving stares of strangers.

Paul O’Grady: “I know it’s a cliché, but I didn’t want to work in an office”. Famous for his formidable Liverpudlian drag queen persona Lily Savage, O’Grady performed on the London gay scene in the 1980s. In 1987, when police wearing rubber gloves raided the Vauxhall Tavern during his act, Lily wryly observed “Well I never ladies and gentlemen, we’ve got help with the washing up!” O’Grady went on to achieve mainstream popularity in the 1990s hosting Blankety Blank and eventually appearing as himself as a chat-show host and Radio 2 DJ. His book Lily Savage A sort of A to Z Thing contained a couple of pages on Polari, including a 58 item lexicon and some grammatically interesting examples like ‘palone vadas omi-palone very cod’.

Derek Jarman: Creator of an impressive catalogue of films including Sebastiane (1976), Jubilee (1978), Caravaggio (1986), Edward II (1991) and Wittgenstein (1993), Jarman was a leading campaigner against Clause 28 and spoken publicly about being diagnosed as HIV+. In 1991, he was canonised by the London branch of the Sisters of Perpetual Indulgence at his home in Dungeness, Kent. The ceremony contained numerous Polari words and phrases: “Sissies and Omies and palonies of the Gathered Faithful, we’re now getting to the kernel, the nub, the very thrust of why we’re gathered here today at Derek’s bona bijou lattie.” Jarman viewed his canonisation as an important event in his life, and the subsequent reporting of the event had the effect of re-appraising Polari as a politically useful tool in the fight against homophobia.