After departing a chilly Lancaster at 6.30 as the sun was rising, then leaving Amsterdam in transit at a balmy 4°C shrouded in jumpers, the heat on arriving in Accra was stifling – like the wave of hot air that hits you in the face on opening the oven door. We were split into two groups, the second of which was left at the airport after being assured that their bus was on its way. We soon learnt that this was an indirect way of saying that actually the hotel had only sent one bus for all of us, and the elusive “second bus” was in fact the same vehicle on a return trip after depositing the first group and an array of luggage at the hotel. By 10pm we were all reunited, and after discovering our gorgeous rooms and, equally importantly, the hotel swimming pool, we began minesweeping our way through the buffet dinner more eagerly than Pacman through a maze. 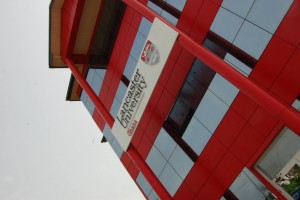 We were awoken early on Monday morning by a cacophony of car horns, which would become a recurring motif on our trip. Our first stop of the day was Lancaster University Ghana, where we were presented with a number of talks courtesy of the Law Society exploring what is meant by ‘the spirit of the law’. Our most valuable piece of advice for the trip (aside from how slight positional differences in doing a ‘thumbs up’ can change it from a positive gesture to making implications about one’s mother) was given to us by Dr Cynthia Forson, Deputy Provos, who told us to ‘close our Western eyes’ and see things from a Ghanaian perspective. This was sound advice to follow, enabling us to relax and experience everything fully and objectively. In doing so, we also learnt to ignore our Western watches and adopt a more fluid approach to time keeping (even by the standards of Lancaster’s bus service…). 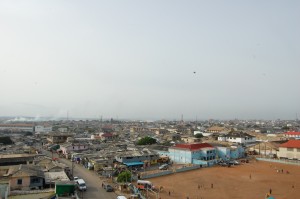 View of Accra from the lighthouse

After mingling with the LU Ghana students over a shared buffet (we do love free food) we were whisked away by our bus to a Ghanaian restaurant for our fourth buffet in 24 hours. Stuffed with plantain, rice, and various types of stew we waddled on to the National Museum of Ghana. It was fascinating to learn more about Ghana’s history, and many of the artifacts on show, including musical instruments, were free to be handled, resulting in a much more participatory, engaging, and less sterile approach than I have experienced before at museums. The afternoon heat was too much for many of us, and we were thankful for our bus’s air conditioning as we drove round the city en route to Jamestown, an old seaside fishing community. As we drove through the city, it was interesting to note that the president’s palace we passed had been built to emulate the shape of the stools used by Akan chiefs that we had seen in the museum. 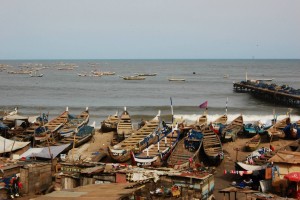 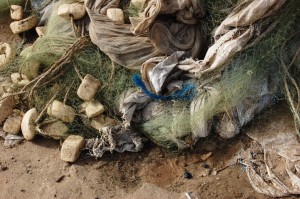 We explored Jamestown on foot, navigating through the hustle and bustle of people cooking and smoking fish, goats looking as lost as we were, chickens eating up scraps, and children running past us and hurling themselves with alarming gusto into the sea. We rounded off our walking tour with a trip up the lighthouse. This was not for the faint hearted or those with a fear of heights, and was, quite frankly, terrifying. After winding our way up the 82 steps of the spiral staircase we were faced with a wooden ladder missing several of its rungs, which we would have to climb in order to reach the top of the tower. Needless to say, I regretted wearing a dress, and my ascent was less than dignified. The heart palpitations and cold sweat when looking over the edge were, mercifully, well worth it for the phenomenal views from the top. We could see right over Jamestown to the sea, and into Accra from the other side as the sun began to set over the city.

When dinner was over we headed down to Bedouin Lounge for a few ‘quiet’ drinks with our new friends from LU Ghana. The bar itself was gorgeous, and we all sat outside in a paved area complete with a burger shack, drinks and shisha bar. The heat of the evening made for a far more pleasant atmosphere than shivering around a patio heater in Lancaster. After sharing some celebratory cocktails we were bonding over a game of “never have I ever”. It was an enlightening experience, and one which I shall divulge no more of on this blog. What happens in Ghana, stays in Ghana.