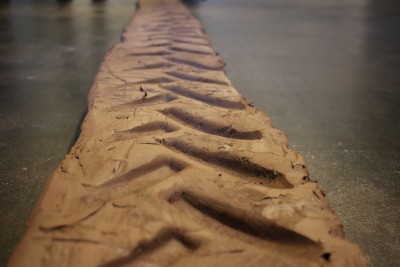 Relocating Land, Memory and Place: A Cross-Cultural Exchange. from Faze3Films on Vimeo.

Relocating Land, Memory and Place: A Cross-Cultural Exchange – Discussion. from Faze3Films on Vimeo.

Dates: exhibition runs as a work in progress from 9th-29th June, with an initial introductory event on Tuesday 9th June, an opening event on the 18th of June and a closing event on 25th June, all at 7pm
Location: System Gallery, above Bar Loco, 22-24 Leases park road, Newcastle upon Tyne, NE1 4PG
Organiser contact: Dr Matthew Johnson (m.johnson@lancs.ac.uk), Lancaster University

Exhibition overview
How can we know what it means to experience land in totally different parts of the world? How does the land, its raw matter and our use of it shape us and our views of ourselves? In this (literally, haha) ground breaking exhibition, Aboriginal Australian artist Archie Moore and Northumbrian ceramicist Matt Calder explore these questions by attempting to replicate the raw features of their childhood environments and experiences of clay in System Gallery. With an Australian landscape and references to Moore’s hometown of Tara, Queensland laid out in terracotta in the first room and a collection of Calder’s childhood memories of clay replicated in clay emerging around a cairn made of ceramic ‘stones’ in the second, the work in progress will develop from its opening night on Tuesday 9th June until its closing on Thursday 26th of June. As part of ‘A Cross-cultural Working Group on “Good Culture” and Precariousness’, the exhibition seeks to make sense of and identify paths to discussion through the radical cultural difference at play in interactions between people from Aboriginal Australian communities around Brisbane and people from Ashington, Northumberland as they develop guidelines for collective responses to insecure neoliberal circumstances. 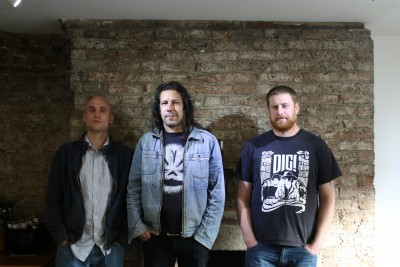 Archie Moore’s Installation
What does it means to identify with and have a sense of belonging to a particular place or locality in an increasingly globalised world?

Aboriginal Australians have a special bond to the land and country and for me it seems to be this feeling of human attachment and belonging to a place is for something that was there. To be precise, there is two instances of a special relationship to place: one is of the small town I grew up in (a sense of place does not necessarily have to be a positive, happy or healthy one) and the other is some kind of archaic residue left over from ancient time. For the place i grew up in was full of emptiness, fear, intimidation etc. but certain areas of the barren, mostly treeless landscape want to speak to me but the tools to interpret what it is saying have been lost a long time ago. What you would see in this place is a void – all the features of the native natural environment trampled and razed by hard-hoofed animals and machinery. All the ceremonial grounds, cultural items, bush foods and water sources replaced by bitumen, weeds, dust storms and dams. A place that lacks a ‘sense of place’. Placeless landscapes are those that have no special relationship to the places in which they are located—they could be anywhere and nowhere. There was a strong feelings of dislocation, isolation and alienation within this space with this echoed in the degree of disconnectedness felt with family members and other Indigenous Australians. A disruption, a disturbance… inter-generational theft. A longing to be a part of something that isn’t there, something that is long gone; only remnants remain in a psychic space.

When asked to be part of an exhibition in Newcastle paired with a potter I thought what is some common ground or connection we could have. Clay is a medium I have very little experience with so I began to think about all my memories of this material. I thought of my arid landscape: on rare occasion of rainfall or after the storm season the moist, green land would quickly turn back to dust under the baking sun. Waterholes would quickly dry up and crack into thick sections of dry earth.
I discovered a white clay pipe in my father’s briefcase that he was reluctant to tell me about. I was curious because he never smoked and why was it kept if it was broken? He did tell me it had something to do with the Royal Antediluvian Order of Buffaloes, a secret society similar to the Freemasons. A group that apparently did philanthropic good for those who needed it under a blanket of secrecy. My father had many secrets of his own from a previous marriage and I was never sure if we were biologically related.

The socio-economic situation of my upbringing denied me many comforts as a child such as toys to play with but I would use imagination to compensate this by transforming something as mundane as a tractor tyre track in mud into an alien landscape. I remember being fascinated by the pattern and textures of the tread. Sometimes I would drive a toy car up and down the hills and valleys I would see in this tyre track, inventing another time and another place.

I’ve included an item from a previous show I had in Sydney that was about memory and identity. A master perfumer had created 11 scents that evoked 7 memories of mine: my first girlfriend, my first day at school, my Aunty’s lesbian friends, a wattle flower (native acacia), the pub, myself and my father. My memory of times with my father are activated by the smell of woodfire smoke and clay, the clay deep under the earth. He would take me on trips to the scrublands to his earthmoving jobs, using a bulldozer to make dams and roads on a farmer’s property. When I am passing an excavation site for a new building and they’ve dug down far enough into the earth to release that smell of clay I am reminded of those moments.

The last item in the show is two lines from Matt Johnson’s song “The Sinking Feeling”, scrawled on the wall in clay slip. My favourite time for music was post-punk England and bands like The Cure, Joy Division/New Order, The Smiths/Morrissey, The Jesus And Mary Chain, The Teardrop Explodes/Julian Cope, Echo And The Bunnymen and The The really hit a cord with me out in this remote town of Tara, Queensland in the early 80’s. No one else I knew was listening to this kind of music and to get access to it I had to write to a record shop 300 kms away in Brisbane and get some vinyl mailed to me. I wasn’t particularly interested in music much until I heard The Cure and discovered someone singing about something I could relate to. I wasn’t very sociable as a young person, preferring to stay indoors reading books and drawing pictures. This post-punk era music spoke of alienation and the human condition which alienated me more from the townsfolk who thought it was stupid, they preferred the vacuous top 40 stuff or very masculine bands that sang of drinking, fighting and screwing.

With this show I am asking what importance does identity with place have in the ongoing construction and development of personal and social identities?

Archie Moore
Archie Moore’s (b. 1970) conceptual practice includes paintings, drawings, sculpture, installation, photographs, video and, more recently, aromas embedded in Aboriginal politics as well as the broader concerns of racism, language, identity and interpersonal relationships. Language in particular plays a constant role, as do the concepts of dwelling and dwellings. Being in one’s skin and the question of whether or not it is possible to experience someone else’s experiences is an ongoing theme.

Since 2012, Moore has produced two major bodies of work around the concept of flags (Flag and 14 Queensland Nations (Nations imagined by RH Mathews)), a series of portraits in perfume based on memories (Les Eaux d’Amoore) and compelling sculptural works that employ altered readymades or assemblages (Snowdome, Black Dog).

Moore completed his Bachelor of Visual Arts at Queensland University of Technology in 1998. In 2001, he was awarded the Millennial Anne & Gordon Samstag International Visual Arts Scholarship which enabled him to study at the Academy of Fine Arts in Prague.

In 2011, Moore began a musical collaboration, ∑gg√e|n, with fellow artist, David M. Thomas, which continues to be active in an expanded form today to include two other visual artists: Geoffrey Vagg and Paul Wrigley.

In 2010, Moore was the winner of the Woollahra Small Sculpture Prize. He has six times been shortlisted for the Telstra National Aboriginal and Torres Strait Islander Award (2005, 2006, 2007, 2008, 2011, 2013). In 2013, he was commissioned by Newcastle Region Art Gallery to create the sculpture, General Sanders vs Colonel Saunders; Also in 2013 he was invited to participate in the University of Queensland’s National Artists’ Self-Portrait Prize. His work for this exhibition, Black Dog, was recently acquired by the National Gallery of Australia, Canberra. Moore is one of fourteen artists shortlisted for the prestigious 2015 Western Australian Indigenous Art Award at the Art Gallery of Western Australia.

Moore’s third solo exhibition at The Commercial is scheduled for September 11 2015 to coincide with Sydney Contemporary art fair.

Matt Calder
With a workshop situated in the beautiful surroundings of Kirkharle, Northumberland, potter and plasterer Matt Calder offers ceramics grounded in the real North East with its striking and wondrous landscapes. Calder has, with the exception of trips to East Africa to visit his ex-pat father, lived and worked in Northumberland all his life, never fails to see the beauty of the landscape and yearns for it when he’s away from home. The physical environment is his muse. The rock formations, colours and textures of the Northumbrian coastline, the remote wildness of the Cheviot Hills and the rustic, natural curves and earthy tones which are abundant in the landscape inspire his work. He replicates this in his work by using warm, dark, tranquil tones and working in a traditional manner. Each handmade ceramic piece is designed and crafted using the highest quality materials, with a range of signature glazing and traditional crafting capturing and recreating the rustically wholesome feeling associated with Northumberland.

The gallery was created in 2012 with the primary aim of encouraging art graduates to exhibit their work alongside more established local artists, providing essential experience of operating and actively participating in the gallery system.

As a volunteer-run, non-profit organisation, the gallery provides vibrant and diverse monthly exhibitions and is now reaching out to a wider audience by promoting music, performance and workshop activities.

Project: This exhibition is part of ‘A Cross-Cultural Working Group on “Good Culture” and Precariousness’, a collaborative project between academics and non-academic community co-researchers in Ashington, Northumberland, and Aboriginal communities around Brisbane, South East Queensland, aimed at identifying and fostering cultural responses to precariousness capable of promoting wellbeing.