Following rapid growth in the nineteenth century, Ashington was described as the largest village in the world, being home to the Charlton Brothers, Jackie Milburn, and any number of other sporting figures. Renowned for its distinctive Northumbrian pitmatic dialect, Ashington has contributed to the development of numerous cultural initiatives, such as the Pitmen Painters. With a population of around 27,000, Ashington has been faced by the decline and closure of the mining industry throughout the second half of the twentieth century, having been affected by the UK miners’ strike of 1984-1985. Despite these events, Ashington retains a unique identity, with residents reporting a connection with place and heritage and an emphasis on extended families. The community co-researchers (hyperlink to the ‘community co-researchers’ tab) come from a wide-range of backgrounds within the town.

By Mary Graham, a Kombu-merri and Waka Waka Elder from Southport, Queensland

The size of the Aboriginal population of pre-colonial Australia has been debated, but seems to be far greater than previously thought by Europeans – much closer to 2-3 million than 500,000. Aboriginal people refer to the region or locality they come from as their ‘country’. Indigenous people who live here but who come from elsewhere, are referred to as historical people. The traditional people of the area are the Turrbal people, whose territories are highlighted on this map

Aboriginal people in this area do not subscribe to the notion that they came from anywhere else – either across a land bridge or in sea voyages in canoes. In the words of Aboriginal Elders ‘we were always here’ and ‘this country made us human’. The Aboriginal people of Brisbane focused culturally on developing and sustaining strategic cooperation with surrounding groups, creating complex networks of relationships. These networks enabled goods to be exchanged across the many countries which constituted pre-colonial Australia, as this Aboriginal language map (which, while representing the vast number of Aboriginal communities, is argued by some Aboriginal communities to not accurately represent all language groups in Australia) by Norman B Tindale illustrates. 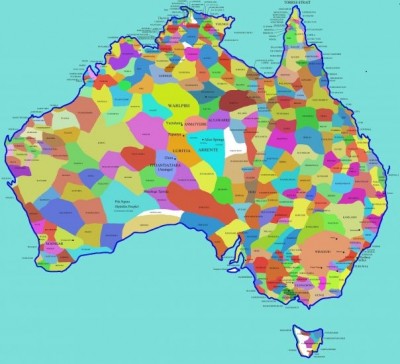 Brisbane was settled by Europeans in 1824. At the time, it was the most densely populated area of Aboriginal Australia. European Brisbane started as a walled convict settlement, with a non-convict population developing in the mid-19th century.

The effects of conquest on the Aboriginal population were significant. In the wake of conquest, Aboriginal people’s movements were restricted by legislation which lasted until 1967 and the harsh treatment of local groups remained particularly harsh until the 1980s. Not surprisingly, Indigenous people from the region have always been among the most highly political Indigenous groups in Australia, fighting hard for human rights and land rights. Even though many who live and work in Brisbane now are historical people, they and the traditional clans still maintain great cultural, social and familial strength.