Hey it’s Sonia again, this time I’ll be talking more about Carleton University for anyone looking at going there themselves. I was lucky enough to be assigned Carleton when it was my first choice, having said that, once I knew I was going there I still didn’t know a huge amount about it. I got in touch with other students also going, which was really helpful in the run up. We were able to discuss things like visas, residences, and flights. I would definitely recommend doing this if you can, since it enables you to talk to someone in the same boat as you if you’re feeling apprehensive, but also it reassured me to think I knew at least one person when I got there. My friend Ellie, who also goes to Lancaster, and I, became really close over the year, and we ended up travelling everywhere together, along with other friends we made … so it’s 100% worth it! 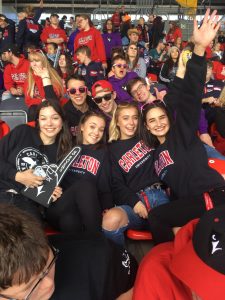 I lived on campus in Leeds House, 1 of 10 residence buildings on campus. Most rooms available are shared with one roommate, however Leeds and a couple other buildings have single rooms, as well as a suite style option with its own small kitchen. There are options of suites with 2 or 4 people in Leeds, I had a suite of 2 with my own room and a shared kitchen and bathroom. Meal plans are also a large part of this, and unless you live in Leeds, everyone has a meal plan. Money can obviously be a huge factor in where you choose to live, and I know some people that did live off campus and commute in – which is easy to do. I personally opted for on-campus, as I felt it would be the best thing for me, especially with lectures, but everyone is different, so spend some time looking into the different accommodation types and which would work best for you. Despite this, when applying, on-campus living for international students is not always guaranteed at Carleton. A perk of paying to live on campus, is that the on-campus gym and pool is included so you don’t have to pay extra for a membership.

When arriving I had already enrolled in my 4 modules for the Fall Term (Sept-Dec), when starting – like at Lancaster, there is a window in which you can change them if you realise one isn’t for you. I did this a few times, and they make it really easy to do. As a linguistics student, I picked modules including Linguistic Analysis, Communication Disorders and Analysis of Written Language. One of the best things about studying abroad is the opportunity to study courses you don’t have the ability to do at home, so definitely keep this in mind! Similar to Lancaster’s minor scheme, Carleton enables you to take courses in other subjects, so depending on your preference this is also another thing to keep your year fun and interesting.

The Carleton Campus is a great hub for university life. With an on-campus gym, swimming pool, ice-house for hockey and skating, football pitch for American football, tennis courts, indoor running track, campus merchandise store, library, O-train and bus stops and plenty of Tim Hortons and other food outlets like Starbucks, there is always somewhere to go or something to do. Roosters is the student café on campus that does great grilled cheese, Haven is also the student run book and coffee shop roughly a 15 minute walk super close and easy to get to from campus. Another great thing about CU, is the location. Located right next to the Rideau Canal, in the summer it’s a stunning place to study or take a walk, and in the winter covered in snow and frozen over there’s nothing quite like it! 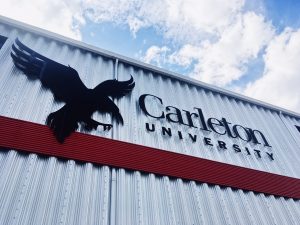 There are many clubs and teams to join, as well as the Student Association (CUSA), who hold many events including Epic Bingo every month. If you’re worried about meeting new people, the International Student Service Office (ISSO) at Carleton are amazing at linking you with CUEx (Carleton University Exchange). This society was the key to helping me meet all my friends, not only do they hold weekly socials at bars, but they also organised events like ice-skating, sledging with huskies in the forest, walks around Gatineau Park, snowshoeing and watching the Parliament Hill light show at the start of the year. They also ran a buddy-up scheme that you could apply to where they pair you up with a fellow Canadian Carleton student! Insider tip – you can hire skates for free at the ISSO as an international student, which saves so much money and it means you can skate in the ice-house or on the Rideau Canal whenever you like!

The student’s wellbeing at Carleton is really good, on campus residences have res-fellows, who are also Carleton students, on every floor which are great for support throughout the year. They also held walk in events around exam time with free ice cream, music, gave away stress-reducing toys and colouring. CU also has a team of dogs who can always been found at the library every week if you need to destress. There is a large support network at Carleton, and along with friends and roommates you wont be alone if you need help. Studying abroad and being away from home, home comforts and an environment and people you are used to is hard so don’t feel you are ever alone, there will always be someone willing to listen if you need it. Getting involved, going out and about, being involved in clubs I found really helped me settle in more, being surrounded by people definitely helped me.

That’s all for life studying abroad and Carleton University for now, but if you have any questions feel free to email me at s.i.french@lancaster.ac.uk ! 😊

View all posts by Sonia French