My experience with the Statistics Summer school in Lancaster

Last winter I applied for the Statistics for Corpus Linguistics summer school at Lancaster, UK (27-30 June 2017) and at the end of February I received the email saying I was offered a place. I was so excited and happy and thrilled: not only could I attend at the classes but I could also meet and exchange ideas with some of leading experts of corpus linguistics of the Challenge Panel Group.

I arrived at Lancaster on a beautiful day on June 26th and got ready for the following day.

I understood the relevance of Statistics in my research and yet still struggled with it – this is why from time to time I feel I need to refresh my mind. In the previous courses I followed I was a bit disappointed as I do not have a statistics background, so I started these summer modules without expecting anything but with the brave-girl mood: notebook, computer, concentration… and let’s go. 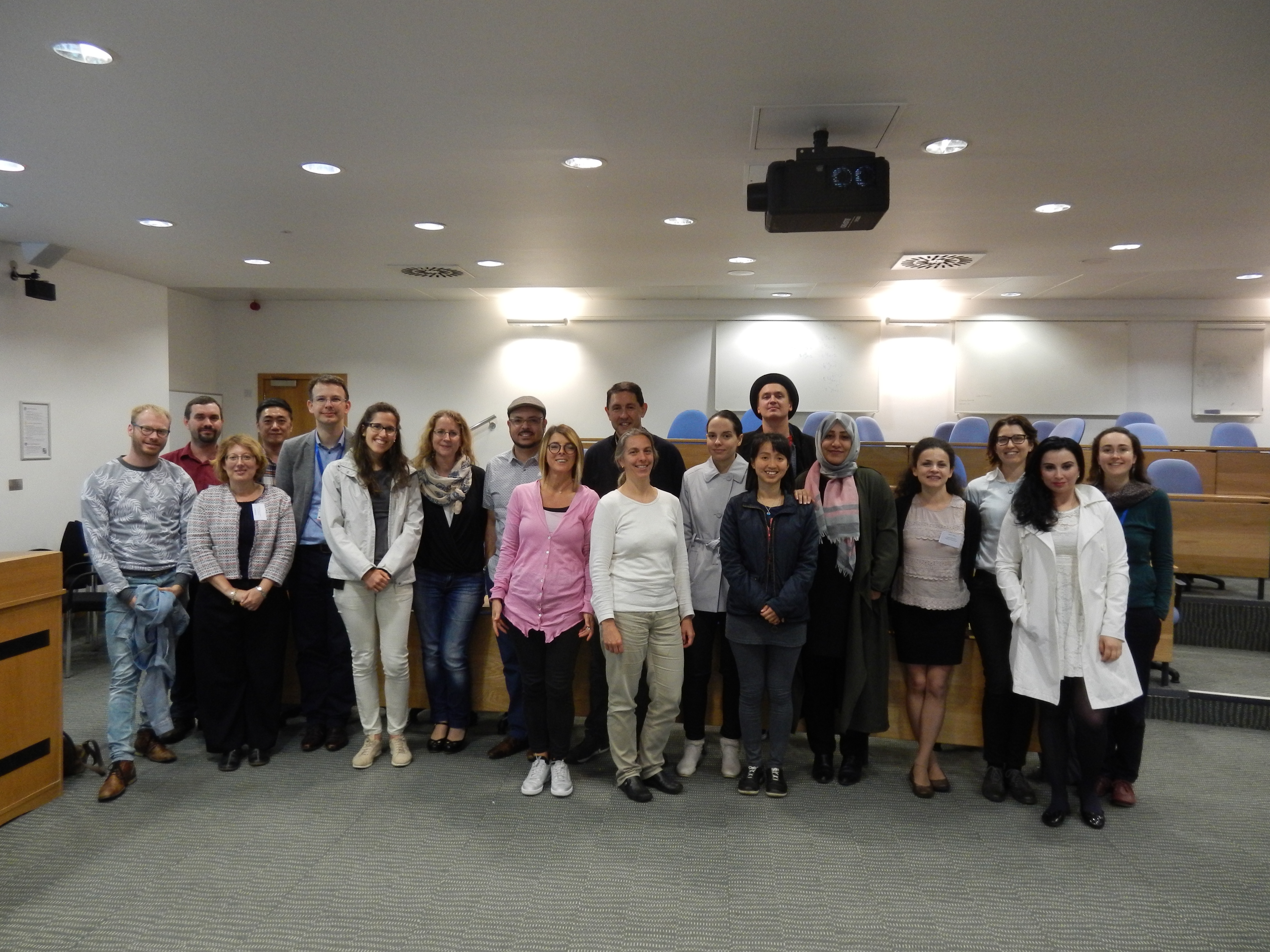 On the very first day, Vaclav (Brezina) started his module on Corpus statistics with such passionate and simple words that I was taken aback and wondered why on earth I had never ever understood earlier such simple stuff as statistics. From that moment on, a new world disclosed: Gries’ and Hardie’s lectures were even easy to my brain. For the first time ever, I could understand!

The most amusing thing was the way in which Vaclav divided us into groups by using the concept of categories: we picked up some papers in which there were some geometrical figures – by trying to understand the common elements which characterize each figure, we managed to form five or six groups. I was in the ‘blue-4-angle group’. With me, there were other four people: Reka Jablonkai, from the University of Leeds, Marek Lukasik from Pomeranian University in Slupsk, Daniel Knuchel from the University of Zürich and Sophiko Daraselia, from the University of Bath. Of course, we had hands-on activities and we, as groups, were assigned tasks. The most important one was to use one of the research methods and tools we had just learnt to carry out a mini-research and present it to the rest of the class.

As a group we got on very well. We helped each other. That was real team-work and co-operation. Together we decided the topic, the tools, the strategies, the methodologies. We discussed the limits of our research and we tried to overcome them. We tried to see possible future developments. While we were working on the assignment, Daniel laughingly said: “This can be a beautiful paper”. “I replied: “Well, why don’t we send an abstract to a conference?” It was June 29th. I knew that there was a conference, the CLAVIER conference in Italy and that its deadline would be on June 30th. It’s a Corpus Linguistics Conference and the invited plenary speakers were Susan Hunston and Paul Thompson – that was a chance we could not miss!

So in a few hours we adjusted the assignment and made an abstract. We presented the assignment “A multilayered corpus analysis of disease, illness and sickness in the BNC” on the very last day of the Statistics for Corpus Linguistics Summer School and told our colleagues about our intention to better develop the assignment into a real presentation to be presented at the CLAVIER conference. So we asked them for feedback. They promptly gave us as much feedback as they could.

On that evening the ‘blue-four-angle group’ created a google-drive group to go on with the work we started at Lancaster University during the Summer School and while going back to our home countries, we went on working on the project and on the abstract which we sent to the conference organizers on the day of the deadline.

On July 16th, we received a wonderful email from the CLAVIER scientific committee saying that “[…]we are pleased to communicate that the abstract you submitted to the conference has been ACCEPTED AS FULL PAPER.“ 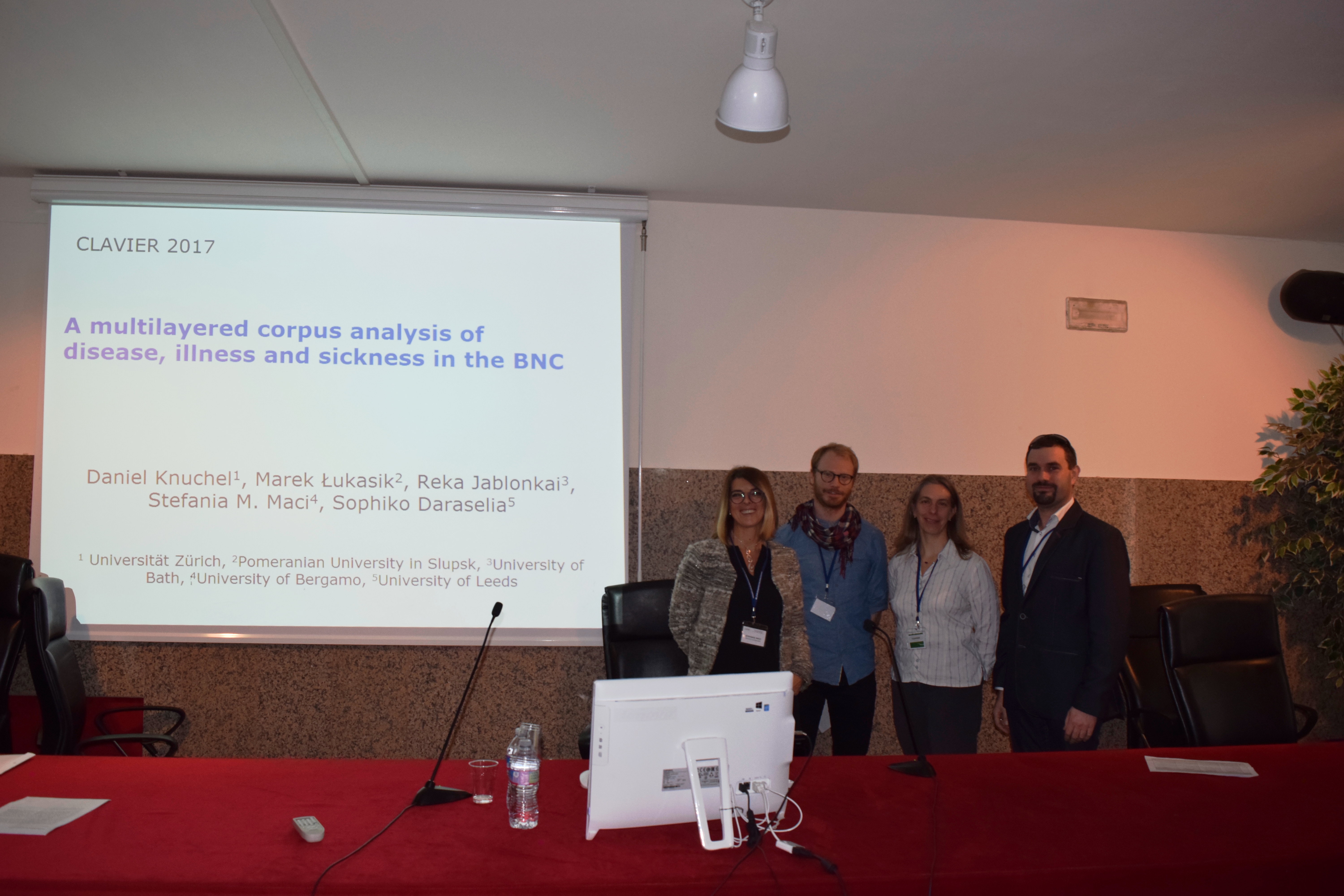 The team presenting at the CLAVIER conference

So, our Summer Course task “A multilayered corpus analysis of disease, illness and sickness in the BNC. A preliminary study” is now a full paper. From a Summer Course, an international research group has been created. We thank Vaclav and the whole Lancaster Summer school Staff for making this come true.