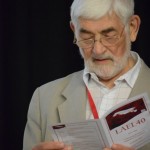 We invited friends, colleagues, past and present, students and former students to post tributes and share their memories of Geoff.

Tributes are now closed, thank you.

96 thoughts on “Tributes and Memories”