The review of this event in BioNews can be found here. 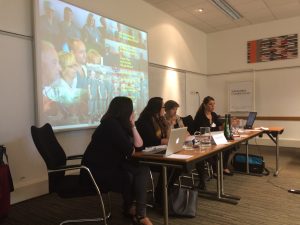 A symposium entitled ‘The Ethics of Uterus Transplantation’ was held at Lancaster University on the 15th and 16th of September 2016. Attendees included academics and postgraduate students working in philosophy, law and sociology; stakeholders; and medical professionals engaged in uterus transplantation research. The symposium was organised to facilitate in depth discussion and inter-disciplinary collaboration between academics and clinicians with an interest in this novel form of transplantation which has been designed to allow persons with absolute uterine factor infertility (AUFI) the opportunity to gestate their own offspring.

Given the recent successful trial of uterus transplantation (UTx) in Sweden which has so far resulted in 5 live births, the symposium began with a session focussing on ‘The Swedish Experience.’ This included a presentation by Dr. Randa Akouri, a member of the Swedish uterus transplantation team and gynaecologist at Sahlgrenska University Hospital. Dr. Akouri summarised the results of the Swedish trial so far, outlined a number of concrete plans for research in the coming years, and tackled questions from the audience regarding both technical aspects of UTx and a number of the ethical questions the trial has raised. These included questions regarding the choice in Sweden to use live as opposed to deceased uterus donors, the extent to which this decision ‘fits’ with the Swedish unwillingness to permit any form of surrogacy arrangements, and whether the benefit of allowing women to experience gestation truly outweighs the harms UTx might pose to recipients.  This was then followed by a presentation by Dr. Lisa Guntram (Linköping University, Sweden) who explored how medical professionals in the Swedish trial have justified the development of uterus transplantation. She noted three key themes often reproduced in physician’s accounts of the development of UTx: equality for women with AUFI, the impact of the procedure on the quality of the lives of such women, and the ‘biological drive’ or ‘instinct’ to reproduce. This resulted in a lively debate concerning such matters as the proper aims and limits of medical treatment, whether UFI should be considered a disease, and the first of many discussions regarding the question of whether (and, if so, in what respects) gestation should be considered valuable.

The question of alternatives to uterus transplants for women with AUFI such as surrogacy, adoption, and ectogenesis were then explored by Dr’s. Mianna Lotz (Macquarie University, Australia) and Natasha Hammond-Browning (University of Southampton). Both noted that such options are not exact equivalents to UTx as none provide women with AUFI the opportunity to gestate their own offspring (or genetic relatedness in the case of adoption). However, they held that despite this there may be good reasons to reconsider whether UTx should be preferred by women who desire to experience pregnancy and birth. Dr. Lotz, for example, suggested that although many women strongly desire to gestate their own children, those who seek to develop or provide UTx must think carefully about the extent to which its availability may both reinforce damaging essentialist and pro-natalist views regarding genetic and gestational parenthood, and  deter couples from adopting (which not only provides persons with children to parent but also has the potential to satisfy the serious, and morally weighty needs of cared-for children). Dr. Hammond-Browning then looked to the risks and harms of UTx for donors and recipients and the extent to which, as a result of the highly medicalised nature of a UTx pregnancy and its occurrence in an enervated uterus, uterus transplantation should really be seen to cater to the desire of women to experience pregnancy. Thus, she suggested that given the inability of UTx to deliver a ‘normal’ pregnancy experience it may well be preferable for women with AUFI to choose ectogenesis over UTx, if and when it is available, in order to reduce harms and risks of harms to both donors and recipients. 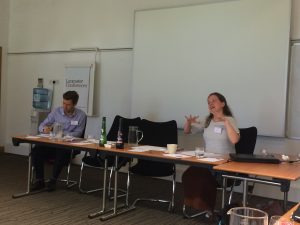 Discussions regarding alternatives, social pressures, and the high value that women with AUFI who are desirous of uterus transplants seem to place on gestation continued into the third and final session of the first day. Dr. Emily McTernan (UCL) explored the value of gestation and the question of whether uterus transplantation should be seen as a response to a medical need or is more aptly characterised as enabling people to pursue a particular and often (but not always) valued life project.

The second day began, as did the first, with short presentations from medical professionals engaged in UTx research: this time with Mr. J. Richard Smith, head of the UK uterus transplantation team and chairman of the charity Womb Transplant UK and Dr. Benjamin Jones who is a research fellow on the UK team. Mr. Smith began by outlining the UK team’s research and their plans for their upcoming trial in 2017 in which they will be using deceased donors. Dr. Jones then explained the inclusion and exclusion criteria for both donors and recipients in the UK trial as well as the points system used to rank potential candidates for the UK trial. This generated a great deal of discussion. One of the major themes which emerged was that of justice and fairness in the selection criteria for recipients. Should, as is the case in the UK trial, only women with a long term partner be admitted into the study, or those who have already become parents through adoption or surrogacy arrangements be excluded from participation? Concerns regarding donor consent also emerged. For just as the use of living donors raises questions about familial pressure and coercion, many deceased donors may well – given the relatively unknown status of UTx– not have considered donating uteri despite signing the donor register. 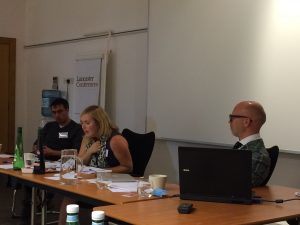 The final two sessions focussed on questions which might arise after trials for uterus transplantation have been completed. Dr. Amel Alghrani (University of Liverpool), for example, looked to the legal and regulatory challenges which might be posed by the availability of UTx in the UK such as the question of how UK law might regulate uterus transplants given that it is both a form of transplantation (which fall under the remit of the Human Tissue Authority) and requires the use of assisted reproductive technologies like IVF (which are regulated by the Human Fertilisation and Embryology Authority). She also looked to the question of whether transgender women might have recourse to access uterus transplants under the Gender Recognition Act 2004 and articles 8, 12 and 14 of the European Convention on Human Rights. Professor Lars Sandman (University of Borås, Sweden) and Dr. Valarie Blake (West Virginia University, USA) then looked to questions of funding through both private and socialised health insurance systems. Professor Sandman suggested that –  although uterus transplants are the kind of technology that could be funded within socialised healthcare systems, given that other forms of assisted reproductive technologies are systematically funded – UTx may not be important enough to qualify for funding given resource constraints and competing priorities. Dr. Blake then looked to the barriers to funding that are likely to arise in the US context. She noted that, although the US healthcare system is one of the most expensive in the world, it is also one of the least efficient and equitable. Thus, as even the most basic medical needs of a significant portion of its population remain unmet and other forms of assisted reproductive technologies are rarely funded, it is unlikely that insurers will be willing to provide citizens with access to uterus transplants. Despite this, however, Dr. Blake did suggest that there exist strong egalitarian reasons to support the inclusion of uterus transplants and other reproductive technologies in the US system.

The event closed with a summary from Professor Ruth Chadwick (University of Manchester) who drew together and discussed a number of key themes which emerged over the course of the symposium. These included a focus on the proper role of medicine and medical professionals, definitions of disease, state funding for conditions whose harms are at least partly caused by unjust social institutions and norms, concerns regarding the autonomy of both uterus donors and recipients, justice for those who seek access to reproductive technologies, and an attempt to understand the balance of harms and benefits created by this procedure. Prof. Chadwick also, however, noted one area of debate which had been largely absent from discussion over the course of the symposium: the welfare of the children created as a result of uterus transplantation trials who not only face risks in terms of the physical health but, as a result of public and media interest may, like the first IVF babies, face psychological burdens.

The questions, issues and themes that emerged throughout the symposium have important implications not only for ethical and policy discussions concerning uterus transplantation specifically, but also ongoing debates in both the fields of reproductive and transplantation ethics.

This symposium took place as part of a Wellcome Funded research programme held jointly by Professors Rosamund Scott and Stephen Wilkinson entitled ‘The Donation and Transfer of Human Reproductive Materials’. It is linked with an open call for papers for a special issue of Bioethics entitled ‘The Ethics of Uterus Transplantation’ which will be guest edited by Professor Rosamund Scott, Professor Stephen Wilkinson and Dr. Nicola Williams. The closing date for submissions is the 31st March 2017.