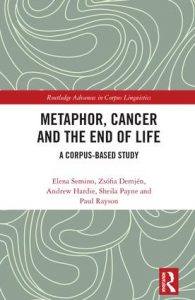 The work that led to the Metaphor Menu has been funded by the UK’s Economic and Social Research Council (grant numbers: ES/J007927/1 and ES/R008906/1) and by Lancaster University.

Thanks are due to the following for their contribution to the Metaphor Menu: Dr Alison Birtle, Pavle Ninkovic, Emily Culpeper, Craig Evans, staff from St John’s Hospice (Lancaster), and volunteers from Cancer Care.

Sources of the metaphors in the Metaphor Menu

Examples 6 and 14 were offered to the research team for inclusion in the Menu by people who have experienced cancer. The team are grateful to Jette Holt for Example 6.

Example 9 is adapted from an article by Kate Granger in the Guardian newspaper, April 2014 (http://www.theguardian.com/society/2014/apr/25/having-cancer-not-fight-or-battle)

Examples 11, 12 and 15 are adapted from two of the comments on an article by Kate Granger in the Guardian newspaper, April 2014  (http://www.theguardian.com/society/2014/apr/25/having-cancer-not-fight-or-battle)

The images were produced by Scriberia.