In week 5, we have a new Ac.F 211 lecturer, not Chinese. He is such an interesting man and his speed is super fast. Once when I just turn to the page which he is talking about, he has moved to the next slides. He tried to make us involved in the lecture, taking out 10 pounds from his purse as an award for the student who provides a relatively correct answer. Crazy, isn’t it? At the first, I just thought he is joking. Actually, it was performed, which was completely stuck out at me.

And, in this Week, it is the last practical lesson of Ac.F 211. Actually, at the beginning of course, I cannot fit the style of the tutor. His tone is flat, and he looks very serious. And I still remember in my first lesson of Ac.F 211 Practical, he told us seriously “Do not speak. Just follow what I say.” SAGE, the programme we are learning, is a new thing for me. And my glasses were left at home. As a result of all this, I was too nervous to finish and understand the task perfectly. After the first class, I was dazed and had no confidence to the course. However, the condition was turned around because I sat beside a person who seems to follow the tutor’s step perfectly and I could ask for his help. Why not ask for the tutor’s help? I was afraid of him. And in the week 4 of Practical, he even complimented me. Haha, but I think I still need to find someone to help me to make up the lessons for passing the coursework of Week 10.

The weather turns into worse than the previous weeks. On Monday, Lancaster was surrounded by the frog, like a wonderland. In addition, the rainy and blustery days were frequent. And the daily life becomes shorter and the length of night becomes longer. I probably was affected this so that I became fond of staying in bed for a long time even I woke up. However, I must be positive and active since I have two deadlines on next Monday, which was totally horrible and made me crazy. Why the deadlines were arranged at the same day? To make me become hard-working, I intentionally bought a lovely bunch of flowers to make my bedroom full of vigour. 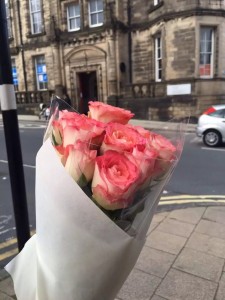 And during the whole week 5, I spent most of time in the library. And I really thanks my flatmate to stay with me in library till midnight on Saturday. And I found at 1 a.m. on Sunday, the N1 bus still works. The concept of time is quite different from my idea. In my mind, N1 should not run on during the wee hours of Sunday, since the timetable was shown that there is no N1  bus on Sunday. However, actually, the wee hours of Sunday still on Saturday.Haha, I was compeletly become addicted to study thanks for two deadlines. If I keep the active attitude to study, I may get a first class at the end of Year 2, which is absolutely impossible. By the way, I really hate that people eat the fried chicken,French fires, pizza and something with strong smell around me in the library , which makes not be in the mood for learning.