As a first year History student considering a future in teaching, I was unsure whether Capital Connections would be relevant for me. I was keen, however, to learn about graduate recruitment processes, and to identify key skills and experiences that would help me to stand out in the competitive job market.

Even before the trip to London, taking part on Capital Connections already offered me invaluable insight on the graduate recruitment process, as I was able to participate in a mock assessment centre for the Civil Service Fast Stream. Hosted by former Lancaster students who were now on the Fast Stream, it was a fantastic opportunity to partake in activities you could expect at assessment centres, such as group debate and presenting to a manager. I left the session feeling confident about how to succeed in future assessment centres, and eager to learn more about exciting opportunities in the Civil Service.

On our first day in London, we reconnected with the Civil Service, as employees gave us more information about the Fast Stream and potential job opportunities – from working in Food Standards to Counter Terrorism, working for the Civil Service can take you, quite literally, anywhere. Working for the Civil Service means that you influence some of the most important decisions that are made in the country, and this really hit home as the room’s balcony where the talk took place was where Churchill gave his infamous VE day speech – particularly interesting for a history student! 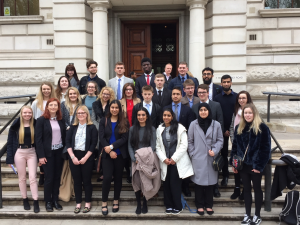 Enthused by what we had learned, the networking event that evening was a fantastic opportunity to talk further with people we had met earlier in the day, as well as more of the Lancaster alumni from a range of industries. Networking was new for many of the Capital Connection participants, however ice breakers helped to get conversations started, and by the end of the night everyone was getting along so well that we continued our conversations over drinks in a nearby pub – the perfect end to a jam-packed day.

The second day began with a rather cramped tube ride to EY in their impressive London Bridge office – the views from the office provided a fantastic backdrop for LinkedIn profile pictures to be taken! Although accounting and finance is not an industry I have ever considered going into, it was interesting to hear about the immense variety of graduate jobs they have on offer, suited to people studying a range of degrees. They also ran some interactive sessions, which challenged our problem-solving skills. Trying to organise a group of thirty people into a specified order without speaking isn’t an easy task, but we managed it successfully – much to everyone’s surprise! 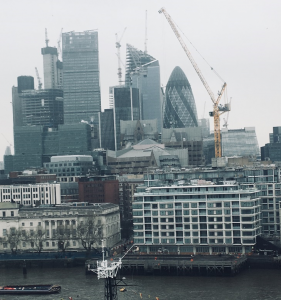 The view from EY’s office – it would take a while to get bored of that!

Our final visit was to BBC, which was particularly inspiring, as we spoke to former Lancaster students who now held important positions at the BBC – including editor of the news at six and ten. As an added bonus, we were given the opportunity to be audience members for the One Show, where we got to see the Manic Street Preachers perform – as well as briefly appear on TV!

I went on the trip feeling certain of my future career, however my eyes have now been opened to the vast number of graduate opportunities available. Regardless of whether I pursue teaching, the Civil Service or even the BBC, I feel confident in what to expect when embarking on the recruitment process, and now have a number of connections I can speak to about any advice I may need. Thanks to Capital Connections, as I approach my second year at university, I feel motivated and inspired about my future, and would jump at the opportunity for more opportunities like this.