The inaugural conference occurred on 1-2 September 2015, with a pre-conference welcome in the Graduate College Bar on 31 August. There were 90 participants with 69 papers in the programme, some with co-authors. The feedback to date has been uniformly excellent and there was a genuine buzz in the sessions and the informal discussions that occurred on both days. The conference ended with a summing up session (for details, see the news section link). Below are some participants’ feedback comments and some photos from the conference 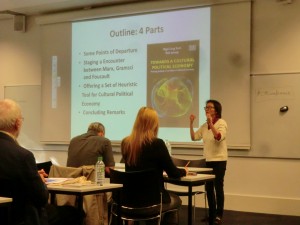 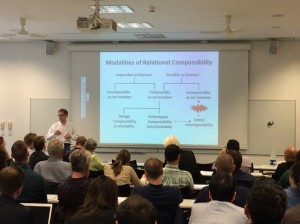 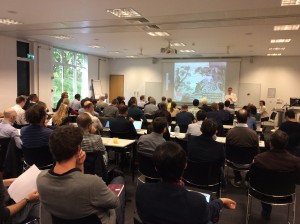 Bob Jessop on Scylla and Charybis 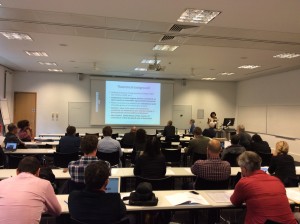 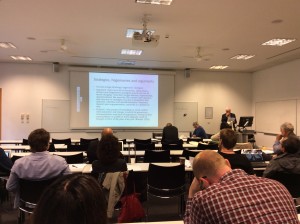 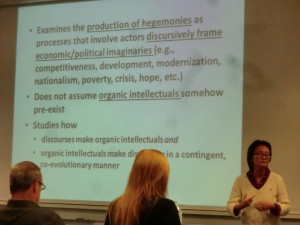 Ngai-Ling on Production of Hegemony and Intellectuals

Inaugural Conference – A Collaboration between:

Cultural Political Economy (CPE) is an emerging and still developing trans-disciplinary approach oriented to post-disciplinary horizons. It is concerned with making ‘cultural turns’ in the study of political economy to enhance its interpretive and explanatory power.

Intellectually CPE originated in a synthesis of critical discourse analysis, critical political economy, neo-Gramscian state theory, neo-Gramscian International Political Economy, the regulation approach, governmentality and governance studies. As such it does not add a separate realm of ‘culture’ to existing concerns with politics and economics; instead it emphasizes that the economic and political spheres are always-already cultural and that taking this into account transforms the study of political economy and cognate fields.

In this regard, CPE embraces

(b) numerous evolutionary and institutional approaches to political economy;

(d) a commitment to dialogue with a wide range of philosophical and theoretical approaches across the humanities and social sciences and seeks to remain open to such dialogues and collaboration.