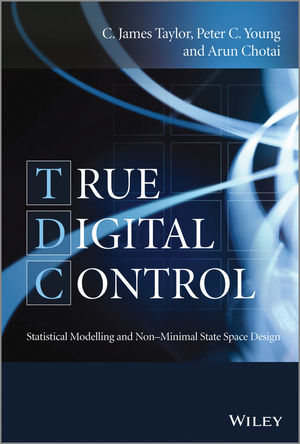 Develops a true digital control design philosophy that encompasses data-based model identification, through to control algorithm design, robustness evaluation and implementation. With a heritage from both classical and modern control system synthesis, this book is supported by detailed practical examples based on the authors’ research into environmental, mechatronic and robotic systems. Treatment of both statistical modelling and control design under one cover is unusual and highlights the important connections between these disciplines.

Starting from the ubiquitous proportional–integral controller, and with essential concepts such as pole assignment introduced using straightforward algebra and block diagrams, this book addresses the needs of those students, researchers and engineers, who would like to advance their knowledge of control theory and practice into the state space domain; and academics who are interested to learn more about non–minimal state variable feedback control systems. Such non–minimal state feedback is utilised as a unifying framework for generalised digital control system design. This approach provides a gentle learning curve, from which potentially difficult topics, such as optimal, stochastic and multivariable control, can be introduced and assimilated in an interesting and straightforward manner.

Covers both stochastic system identification and control system design in a unified manner.

Considers recent research into time-variable and state-dependent parameter modelling and control, essential elements of adaptive and nonlinear control system design, and the delta–operator (the discrete–time equivalent of the differential operator) systems.

True Digital Control: Statistical Modelling and Non–Minimal State Space Design is a comprehensive and practical guide for students and professionals who wish to further their knowledge in the areas of modern control and stochastic system identification.

In this book, we promote a True Digital Control (TDC) philosophy that encompasses the entire control system design process, from data collection, data–based model identification and parameter estimation, through to control system design, robustness evaluation and implementation. This introductory chapter reviews some of the standard terminology and concepts in automatic control, as well as the historical context in which the TDC methodology was developed. One of the key methodological tools for TDC system design, namely the idea of a non–minimal state space form, is briefly introduced. This is followed by an outline of the book structure.

Control systems in this book are typically represented in block diagram form, with Transfer Function (TF) models representing both the mathematical model and control algorithm in various feedback arrangements. Hence, in this tutorial chapter, we introduce the general discrete-time TF model represented in terms of the backward shift operator, define the poles and zeros of the system, and consider its stability properties. We subsequently review several rules of block diagram analysis and use these to introduce three basic, discrete–time control algorithms: namely, proportional, integral and proportional-integral control. The limitations of these simple control structures are discussed, thereby providing motivation for subsequent chapters.

This chapter considers minimal state space representations of the Transfer Function (TF) model and shows how these may be employed in the design of State Variable Feedback (SVF) control systems. In particular, a pole assignment SVF control law is developed for the general linear nth order system. Such a minimal dimension SVF always involves n states, where n is the order of the denominator polynomial of the discrete–time TF model. Two particularly well-known black-box state space representations of this minimal type are considered: namely the controllable canonical form and the observable canonical form. Some mathematical background is introduced, including the transformation between state space and TF models, so defining the characteristic equation, eigenvalues and eigenvectors of a system. Finally, the concepts of controllability and observability are introduced.

The minimal design approach considered in the previous chapter has one major difficulty: namely, the state vector is not normally available for direct measurement. In this chapter, therefore, we introduce an alternative non-minimal state space form, in which the state vector is composed only of those variables that can be measured directly and then stored in the digital computer for use by the control law. The controllability conditions are first established. Subsequently, it is shown that the non–minimal controller can be implemented straightforwardly, without resort to state reconstruction, thus simplifying the control system design and making it more robust to the inevitable uncertainty associated with the estimated model of the system. The final sections of the chapter elaborate on the relationship between non–minimal and minimal state variable feedback control, while the theoretical and practical advantages of the non–minimal approach are illustrated by worked examples.

The full power of non–minimal state variable feedback is demonstrated in this chapter, with the introduction of an integral-of-error state variable to ensure Type 1 servomechanism performance. The control law obtained in this manner is called a Proportional-Integral-Plus (PIP) controller, since it can be interpreted as a logical extension of conventional Proportional–Integral–Derivative (PID) design, here with additional feedback and input compensators introduced when the process has either second or higher order dynamics; or pure time–delays greater than one sampling interval. The advantage of PIP design over earlier, more ad hoc, dynamic output feedback algorithms lies in its inherent state space formulation, which guarantees closed–loop stability in the fully deterministic case. This chapter focuses on two design techniques, namely pole assignment and optimal linear quadratic control.

There are a number of different methods available for implementing the basic proportional-integral-plus control law, in addition to the standard feedback form introduced in the previous chapter. These are, of course, all based on state variable feedback but the control input can be generated using different control structures that can have various advantages in practical applications. The present chapter employs both simulated and real examples to discuss the robustness and disturbance response characteristics of the main control structures that emerge from the analysis. These include: the feedback, forward path and incremental forms used for practical implementation; links to the Smith Predictor for time-delay systems; stochastic optimal Linear Quadratic Gaussian (LQG) and risk sensitive design; feed-forward control; and model–predictive control.

This chapter considers multi–input, multi–output systems, in which the system is characterised by multiple control inputs that affect the state and output variables in a potentially complicated and cross–coupled manner. Following a similar approach to earlier chapters, however, the non–minimal state space model, with integral-error state variables for steady state decoupling control, allows for the use of full state variable feedback without the need for an explicit state observer. The resulting multivariable proportional-integral-plus control system is, therefore, relatively straightforward to design and implement in practical applications. Two design approaches are considered: (i) multi-objective optimisation, in which conflicting objectives such as robustness, system constraints, overshoot, rise times and multivariable decoupling are achieved by concurrent numerical optimisation of the optimal linear quadratic weighting matrices; and (ii) an algebraic approach for combined multivariable decoupling and pole assignment.

This chapter considers the subject of stochastic system identification, i.e. the estimation of control models from noisy measured input–output data. In particular, the chapter provides an introduction to the en bloc and recursive algorithms that are used in the previous chapters of the book for estimating parameters in Transfer Function models and develops a general procedure for model structure identification. Starting with the single–input, single-output, discrete-time case, the algorithms are subsequently extended to the multivariable, continuous–time and closed–loop situation. All these algorithms are described in a tutorial style that avoids unnecessary theoretical rigour and is intended to provide the reader with a basic understanding of their development and application for true digital control
design.

This chapter considers two additional topics that are not central to True Digital Control (TDC) design but could have relevance in future TDC design studies: namely, control system design based on delta-operator models; and the use of nonlinear Time-Variable (TVP) and State-Dependent (SDP) parameter models. The delta-operator is the discrete-time, sampled data equivalent of the differential operator. It can be applied to a wide range of discrete-time systems, from sampled data systems with coarse sampling intervals to rapidly sampled, near continuou-time systems. In the latter situation, it offers a valuable alternative to the backward shift operator considered in earlier chapters. With regard to the second topic, the recursive nature of all the estimation algorithms considered in the previous chapter allows for the development of TVP and SDP models that can be used for real–time nonlinear applications, such as self-tuning, scheduled and adaptive control.

Received his B.Sc. (Hons.) and Ph.D degrees from Lancaster University, UK, before joining the academic staff of the Engineering Department in 2000. His research focuses on control system design and system identification, with applied work spanning robotics, health & medicine, transport, energy, agriculture and the environment. This has led to over 100 publications in the open literature and widespread impact across a variety of academic and industry–based users. He has pioneered new advances in non–minimal state space design, and coordinates development of the well–known Captain Toolbox for Time Series Analysis and Forecasting. He is a Fellow of the Institution of Engineering and Technology, and supervises students across a spectrum of mechanical, electronic, nuclear and chemical engineering disciplines.

Emeritus Professor at Lancaster University, UK, and Adjunct Professor at the Australian National University, Canberra. After an apprenticeship in the Aerospace Industry and B.Tech., MSc. degrees from Loughborough University, he obtained his Ph.D degree from Cambridge University in 1970 and became University Lecturer in Engineering and a Fellow of Clare Hall at Cambridge University. After seven years as Professorial Fellow at the Australian National University, he then moved to Lancaster University in 1981 as Professor and Head of the Environmental Science Department. He is well known for his work on optimal identification, data–based mechanistic modelling and adaptive forecasting, with applications in areas ranging from the environment, through ecology, biology and engineering to business and macro–economics.

Until his retirement, was Senior Lecturer in the Lancaster Environment Centre at Lancaster University, UK. He holds a Ph.D in Systems and Control and a B.Sc. (Hons.) in Mathematics, both from the University of Bath, UK. Following his appointment to an academic position at Lancaster in 1984, he taught and developed modules in environmental systems, courses that were then unique to the UK in providing an advanced, quantitative approach to the subject. For many years, he was also joint head (with present co–author Peter Young) of the Systems and Control Group, which he helped to build into a successful research unit that became known internationally for its research in the areas of system identification, time–series analysis and control system design.

For questions or comments on this book or associated software please get in touch with the authors.