This thesis documents a proof-of-concept study of a novel, scintillator based, coded-aperture approach to neutron detection. Developments presented in this document suggest that the coded-aperture approach, previously mainly associated with photon detectors, can be adapted for a small scale neutron detector. This work represents an innovative, scintillator based approach for small scale radiation detectors aimed at nuclear decommissioning applications.

A novel pixelated plastic scintillator was designed and built in this work. Scintillator cells (2.8×2.8×15 mm each), built of EJ-299-34 plastic were manufactured and arranged into a 13×13 array. The plastic scintillator which was used in this research was sensitive to both gamma and neutron fields. Experimental data were obtained for various solid scintillator samples and a comparison of a number of pulse shape discrimination techniques was performed. Prior to the experimental work, a simulation based study identified potential candidates for the scintillation material, and characterised the mixed-field environment, provided by 252Cf at Lancaster University, UK. Suitable coded-aperture materials were also computationally identified, and were subsequently used to manufacture a tungsten coded aperture, based on modified uniformly redundant array design technique.

The pixelated nature of the coded-aperture based approach to radiation imaging allows the lateral resolution of the image to be improved, without affecting the signal-to-noise ratio. The focal point of this technique is located in the coded aperture design and the scintillator. Modulation properties of the rank-7 coded aperture, made of tungsten using additive manufacturing techniques, were investigated. The experiment was performed using 137Cs gamma-ray calibration sources at Lancaster University. Data obtained were subsequently used to perform the localisation of the point source used in this study. The idea of using the tungsten coded aperture for dual-particle imaging was also simulated using Monte Carlo techniques (MCNPX) prior to the experimental work. The pulse shape discrimination performance of the pixelated organic plastic scintillator was investigated. The scintillator was exposed to a mixed-field environment provided by 252Cf and its performance was compared to that of a cylindrical plastic sample. Tests were also carried out in moderated neutron and gamma-ray fields of 252Cf. Suitable pixelated photodetectors, together with associated readout electronics circuitry, were also identified. 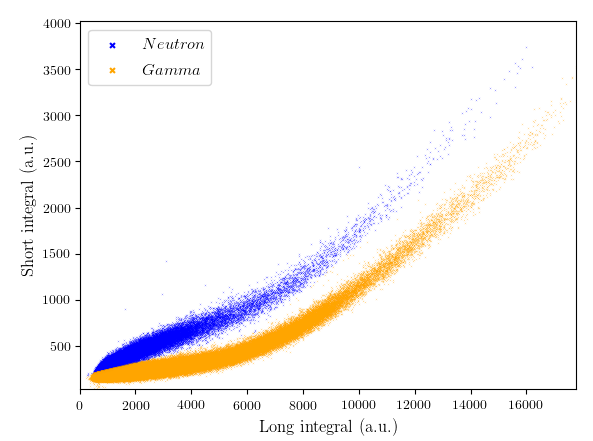