Ramp metering is part of the tool-kit of measures being introduced by the Highways Agency (HA) aimed at making better use of the existing road network. The M3/M27 Ramp Metering Pilot Scheme (RMPS) objectives include the application and evaluation of different control strategies, in order to develop standards for the Nation’s motorways. To date, however, the control systems used for the RMPS are all based on the same local designs, which only utilise on-line data in the immediate vicinity of the on-ramp.

In contrast, the linked ramp metering algorithm considered in this project utilises the latest locally-coordinated control methodologies, in which the effects of ramp metering controllers at other locations in the system, as well as more remote in-road sensor information (such as the data provided through the MIDAS system), are all taken into consideration in the computation of the control action at each individual site. In this manner, the linked controller is able to foresee impending traffic congestion before it becomes apparent at the ramp metering site in question, and so take appropriate action to avoid, or limit, this congestion. Because of its advanced state variable feedback derivation, taking advantage of recent developments in control theory, the linked controller is referred to as a ‘non-minimal state space’ or NMSS-based algorithm.

The primary objective of this study is to evaluate the potential benefits of the NMSS control system by utilising two kinds of computer model. First, a macroscopic Statistical Traffic Model (STM) developed at Lancaster University, which represents the traffic behaviour at the aggregate level and is directly useful in model-based control system design terms. Secondly, a microscopic simulation model MITSIMLab, developed at the Massachusetts Institute of Technology (MIT), which is able to represent the behaviour of individual vehicles, and so provides a means for evaluating different on-ramp designs at this microscopic level. 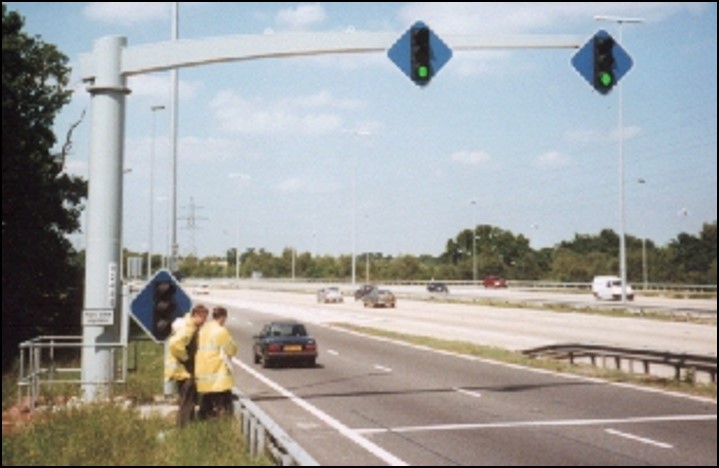