It is widely recognised that the ventilated airspace in agricultural buildings and the human built environment is imperfectly mixed. Such imperfect mixing leads to gradients in variables such as temperature, humidity, gas, dust and air velocity, all of which affect the micro-environment around the animal or plant. It is clear, therefore, that mathematical models and control systems must adequately account for these nonlinear, imperfect mixing processes.

To investigate these issues, a 1m x 2m x 2m fully instrumented ventilation test chamber has been built in the Engineering Department at Lancaster University. Here, a computer controlled axial fan is positioned at the outlet in order to draw air through the chamber, whilst a ventilation rate sensor measures the associated air velocity. In fact, ventilation rate has been shown to be one of the most significant inputs on the microclimate surrounding plants or animals within the majority of agricultural buildings, including livestock housing, glasshouses and storage warehouses, so good control of this variable is essential. A heating element, together with a 3-dimensional array of temperature sensors, completes the specifications of the chamber.

Although initially constructed as a small scale representation of an agricultural building, the modelling and control problems that can be investigated using the environmental test chamber, apply across a wide range of scientific and engineering disciplines. These include air conditioning and climate control in the human built environment, but extend also into the automotive industry and high technology areas such as the fabrication of microprocessors. Finally, the chamber provides a valuable teaching resource for both undergraduate and postgraduate students. In this regard, the chamber provides a ‘hands on’ modelling and control systems design tool that helps maintain the design philosophy of the Engineering Department at Lancaster. 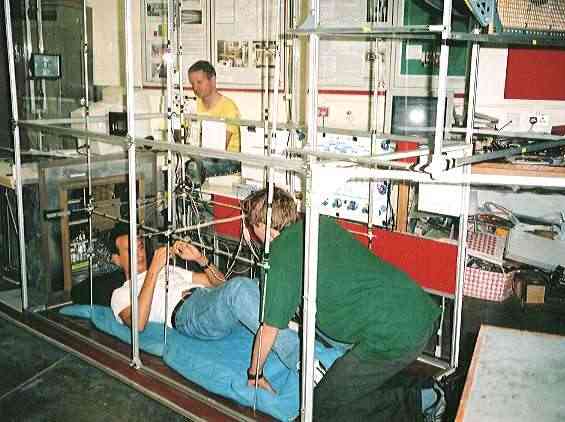 The chamber is presently being used to develop nonlinear control systems, building on earlier research at Lancaster University into Proportional-Integral-Plus (PIP) control. Nonlinearities in the micro-climate system take a number of forms. In the first instance, the steady state relationship for each input-output pathway is typically nonlinear, so that the gain of the system varies over the operating range of the variables in question. For example, at high applied voltages the airflow rate converges asymptotically to a maximum value determined by the characteristics of the fan. Secondly, at low applied voltages, stable airflow patterns are not necessarily achieved and linear flow conditions often breakdown. Furthermore, each actuator to the micro-climate control system, such as the heating element, has an upper and lower power limit that cannot be violated in practice, requiring constraint handling systems.

Such nonlinear systems occur extensively in the field of dynamic analysis and their control presents the designer with a difficult challenge. Recent research has considered various model-based algorithms including nonlinear generalised predictive control and exact linearisation by feedback, whilst partially linear techniques include gain-scheduling, velocity-based linearisation and bilinear systems control. Over the last few years, Proportional-Integral-Plus (PIP) control systems have been successfully employed in a range of practical applications, including forced ventilation in agricultural buildings. To date, however, any inherent nonlinearities in the system have been accounted for in a rather ad hoc manner at the design stage. This has typically involved the utilisation of multi-objective optimisation techniques, based on the diagonal and off-diagonal elements of the weighting matrices, in order to improve robustness to model uncertainty and to reduce the likelihood that constraints will be violated. However, one novel research area currently being investigated at Lancaster, is based on the identification of State Dependent Parameter (SDP) models. Here, the nonlinear system is modelled using a quasi-linear model structure in which the parameters vary as functions of the state variables. 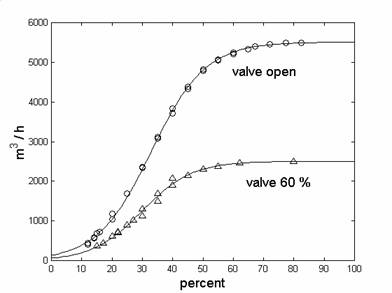 In addition to Engineering, researchers from both the Environmental Science and Physics Departments at Lancaster University have utilised the chamber. For example, the chamber has been used to investigate the effects of windspeed on the performance of novel passive air samplers for persistent organic pollutants. In this regard, the Environmental Ecotoxicology Group at Lancaster (Prof. Kevin Jones) has been developing passive air sampling techniques, which can be used to monitor a range of persistent organic pollutants in the ambient atmosphere.

Students from Environmental Science have also used the ventilation chamber to cross calibrate new anemometers. These are now installed at 1m and 30m high on the mast at Hazelrigg Weather Station. The project is looking at vertical wind profiles in the lower boundary layer (Dr. Rob MacKenzie).

In a further example, the chamber has been used to investigate the bio-response effects of a habitant (a volunteer in light sleep mode) within a controlled environment by researchers from Physics (supervised by Prof. Peter McClintock). Recent research suggests that it is possible to model and control dynamic animal responses such as heart rate and general activity to micro-climatic deviations, and to use this information to improve the environmental conditions for animals housed in agricultural buildings. In an attempt to integrate these factors into a full bio-process control system, a series of experiments were carried out with a human volunteer inside the chamber fully wired to an array of sensors to measure heart rate (ECG), breathing rate, blood volume flow (blood pressure), skin temperature and airflow around the body. 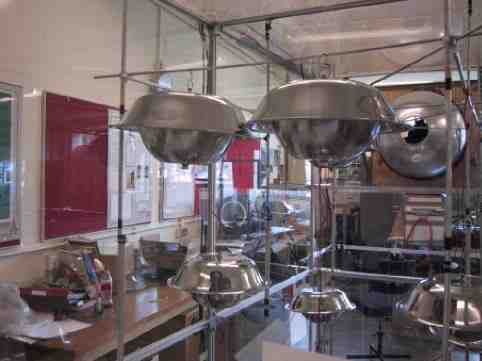 The chamber is constructed of an aluminium framework in modular sections, with 1m x 1m x 5mm thick perspex sheets fitted into the framework. The inlet (0.0133m2) is cut into the lower modular section, while the outlet (0.0133m2) is at the opposite end in the top modular section. The outlet has an axial fan, which can draw the air through the chamber at different ventilation rates. Housed within the inlet is a heating element (500w) to generate heat input and a second fan to generate a disturbance to the airstream within the main body of the chamber. The chamber is fastened to a wooden base on casters, which makes the whole installation mobile.

Inside the chamber, a 3D array of 18 thermocouples (type K) measure the temperature distribution of the internal micro-climatic environment. In addition, thermocouples are sited at both the inlet and outlet in order to record reference input and output temperatures against the internal temperature distribution. The outlet airflow rate is measured via an air velocity transducer. Each of the fans and the heating element are controlled by Thyristors which are in turn controlled by a Phase Angle Trigger Module. Each control circuit is then controlled by a 0-5 Volt signal from an I/O card housed in a PC. To measure the airflow rate away from the outlet a second air velocity transducer is positioned inside the 3D-airspace. This can be moved to record the airflow rate in different areas of the chamber. Finally, lighting control via a multi-dimmer switch is included for enhanced visualisation of the internal airflow using smoke. Here, the smoke machine connects to an inlet above the heater in order to carry out visualisation experiments. Such experiments allow zones of imperfect mixing or ‘dead zones’ to be identified.

Dr Philip Leigh built the chamber and set up the on-line data acquisition hardware and software. In addition to his own research using the chamber, Dr Leigh also volunteered considerable time to help with the various collaborations mentioned above.