Although nonlinear systems occur extensively in the field of dynamic analysis, their control presents the designer with a difficult challenge. The construction industry, for example, currently deploys a large range of heavy machinery including cranes, excavators and piling rigs. Here, semi-automatic functions are starting to be adopted as a means of improving efficiency, quality and safety. However, the behaviour of hydraulically driven manipulators is dominated by the highly nonlinear, lightly damped dynamics of the actuators. The problem is generally made more difficult by a range of factors that include highly varying loads, speeds, geometries and disturbances, such as the soil-tool interface. As a result, conventional linear control algorithms can yield rather erratic movements, unless a relatively slow control action is employed.

To help address such problems, this project has utilised a ‘non-minimal state variable feedback’ approach to control system design. Using this generic framework, a comparative evaluation of several well known linear and nonlinear methods has been completed. These include controllers based on linearization about an operating point; scheduled control; adaptive control; and exact linearization by feedback; together with a recently suggested method based on the identification of State Dependent Parameter (SDP) models. In the latter case, the nonlinear system is modelled using a quasi-linear structure in which the parameters vary as functions of the state variables. The linear-like, affine structure of the SDP model means that, at each sampling instant, it can be considered as a ‘frozen’ linear system. This formulation is then used to design a Proportional-Integral-Plus (PIP) control law using linear system design strategies such as pole assignment or suboptimal linear quadratic design. This yields SDP-based control systems in which the state feedback gains are themselves state dependent. 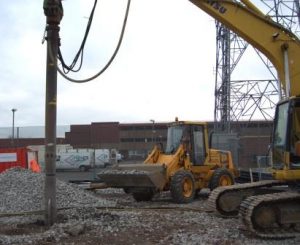 One practical outcome of the research is the development of a fully operational, SDP-based control system for the automation of a vibro-lance used for ground improvement on a construction site. Here, a vibrating probe is lowered into the ground and penetrates downwards by means of a two arm commercial hydraulic excavator, compacting the surrounding soil. Field tests with an industrial partner, Bachy Soletanche Ltd., have demonstrated the practical utility of the system at construction sites in Leeds and Liverpool. These results show that the new approach increases the speed of operation by a factor of three in comparison to manual control, whilst also yielding improved accuracy over linear design and, therefore, a potential increase in tool life. In fact, a key benefit of such automation is the potential to eliminate verticality errors that had previously lead to probe repair costs of over £8000 on each occasion. 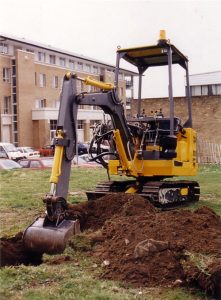 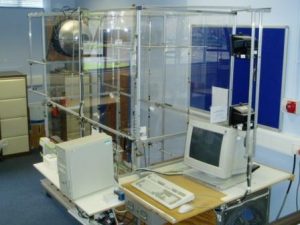 Further practical demonstrators developed during the project include an automatic trench digging system, based on both the Lancaster University Computerised Intelligent Excavator (LUCIE, as shown in the photograph above) and its 1/5th scale laboratory representation; and the regulation of ventilation rate and temperature in environmental test chambers, representing sections of a livestock building or glasshouse, at both Lancaster University and Katholieke Universiteit Leuven. In the latter case, extrapolating the reduced operating cost of the new ventilation rate controller developed, to the total production costs per housed animal, could yield significant savings. Finally, PIP methods have been successfully applied to additional demonstrators developed by one of the project partners, ALSTOM Power Technology Centre, including their multivariable nonlinear gasifier model (Benchmark Challenge II).

Implementation results for these and other applications suggest that, in cases with a high degree of nonlinearity, the novel SDP-based methods typically yield the most robust and accurate control. Indeed, one key methodological advance of the project has been the theoretical development and subsequent exploitation of such control systems. Here, the closed-loop stability and controllability properties have been investigated and established for selected model structures. For example, the research shows that the response of the nonlinear controller derived from a commonly encountered SDP model type with pure time delays, exactly equals the ‘designed-for’ response, such as the dead-beat solution, assuming only that the linear controllability conditions are satisfied at each sample. Further to these results, the project has also developed related PIP methods for the control of nonlinear systems with hard constraints on the input and output signals of the controlled process. The approach utilizes a model-predictive control framework, in which the control signal is optimized in real-time in order to achieve optimality, subject to plant operational constraints.

Another practical outcome of the project has been the completion and subsequent Internet release of the Matlab-based Captain Toolbox for Time Series Analysis and Forecasting, together with the preparation of an associated handbook. The updated toolbox includes all the latest algorithms for SDP model identification and estimation, necessary for subsequent control system design.

Research council funding of this project was primarily based on the support of one PhD studentship. In this regard, Matthew Stables successfully defended his thesis in April 2006, having already taken up a post-doctoral research position in the Department following completion of his PhD studies.