Skip to content
Posted on December 15, 2015 by Rachel Dodd

Overall, The life in Week 10 was out of control, but it was a special experience. Haha, who can have a personal experience of a flood during his campus life. 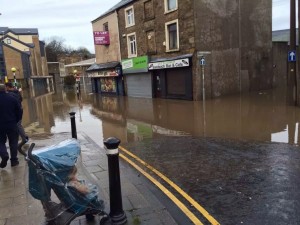 The power suddenly was cut off on Saturday evening, while I was typing my report for Ac.F211 on my laptop at home. At first I thought light bulb burned out. Then,  the aisle lamp did not work I found, whole flat was without electricity supply. Next, after going out, the whole street was dark. I used the Moments and knew that the whole Lancaster was out of electricity. My friend posted a message ‘The library was dark. The computer in the library suddenly shut down. I did not save the report which I spent all afternoon on it. What shall I do?’ I was sorry for hearing that and grateful  that I did use my laptop at home. After 30 minutes, there was no signal. At that night, I thought this was not a big event and everything would be fine tomorrow morning.

Until 12 o’clock on Sunday, the electricity still was out. Thanks for God,  cooking stove in our house works by fire. So we still could cook some hot food. As we had the deadline on Monday and had no idea whether we can apply the extension of deadline or not, we decided to go to Preston by taxi and booking a hotel. The taxi company was so busy that that taxi was available after 6 o’clock p.m. And at around 5 o’clock, we had electricity and cancelled the taxi. And we began to focus on our coursework.

However, after 10 minutes, after my friends getting the information from the others, we knew that this term was ended and there was no test and deadline of report. I was pretty happy for hearing that. Bad news always comes with good news. The situation was worse than we thought. The electricity station was flooded. The electricity now was supplied temporarily by a power supply car. University had arranged the buses to send students to Preston. The hotel in Preston must be full of people. Nobody cared us and were responsibility for us who are live-off-campus students. The huge amount of information ‘run’ to me. Based on above information, someone suggested to call a taxi to Manchester and book a hotel during the trip. The taxi driver was crazy and raise the price to £150. OMG, it costs only £80 in normal times. Actually, I preferred staying in Lancaster since I did not have coursework and it was fine for me to live with electricity but without signal. The most import thing is that I did not like the feeling of insecurity as I did not prepare for anything and everything was out of control. However, my friends tended to go to Manchester. Finally, I decided to leave Lancaster with them. And it proves that it was a smart decision.

98% of hotel in Manchester were full, and we were lucky to find a pretty nice department for future 4 days. After checking-in, we went to a nice restaurant to celebrate that we successful escape from Lancaster. A dessert calmed my heart and comforted my mood completely. 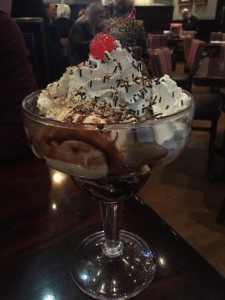 After coming back to the department, we found a group of Chinese students with packages at the ground floor. And when we have the eye contracts, they ask us whether we were from Lancaster University. Haha, Manchester was occupied by Lancaster University students as well. During the following days, we met the people we know from Lancaster University in the restaurant, on the street, in the shopping mall and in the cinema from times to times. In these 4 days, it was burning cash but it was enjoyable. I had milk-tea, Dim-Sum, hot pot, Korean barbecue and Japanese Sushi and saw a Chinese film called ‘ Our times’, which was hot in China now. It surprised me that I can saw it in Manchester. 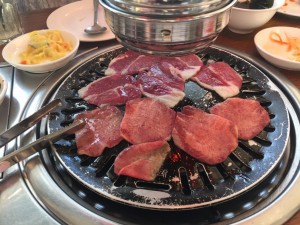 I came back on Thursday and everything was getting better. Hope the similare expenice I just had once which is enough.