Skip to content
Posted on November 30, 2015 by Rachel Dodd

Last Friday (November. 13th), bomb and gun attacks had hit central Paris at least 6 public places, which shocks me. And I immediately attempted to contact with my friend who is currently studying in the Paris. Thanking God, she stayed in the dormitory and did not go to the city centre. But I was sorry to hear that her friend’s classmate, a Chinese girl, died in the accident. Suddenly, I had a feeling that death is so close to everyone. And I was depressed for a long time.  At Saturday night, London Eye and Shanghai Oriental Pearl TV Tower (in my hometown) turn up the blue, white and red lights, which is the colour of French flag to mourn victims in Paris. At 12 o’clock on Monday, an activity of ‘Pray In Paris’ was held at Alexander Square, Lancaster University. People from different countries got together bit and bit before 12 o’clock and when the clock pointed at 12, a hush fell. People present stood solemnly and pray for Paris. When it was over, the crowd dissipated quickly. 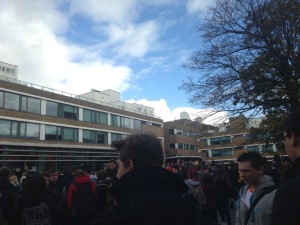 I found a really interesting thing, just for me. Since I needed a book for reviewing Ac.F 214 to prepare for the Next Monday’s test, I checked it and it was shown that it is at lower ground. During past 2 years, I went to the library no fewer than a hundred times. But this was my first time to know the lower ground is available for students and go to the lower ground. There is a special deceive that I have no idea how to call it. It is an amazing deceive that you can move it by handle and it really save the space. I played it for a while. A little stupid, am I? 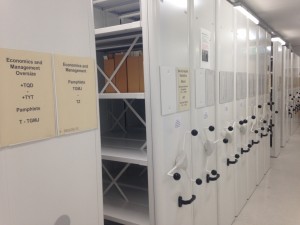 The weather during this week was totally terrible. Winter has come.  It became cold, rainy and windy. And it was uncertain. The sun came outs after a heavy rainy with high wind on Friday. And rainbows occurred. There were two rainbows in the sky. One is faint. I found the rainbow is common in Lancaster, even 2 rainbows. But every time I see the rainbow, the mood can be improved immediately. It makes me believe that the good luck will come although I completely know the performing of rainbow. The mentality is quite ambivalent, I know. 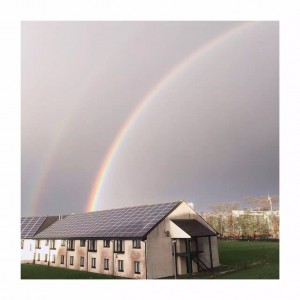 This week, I felt I was pretty hard-working and I decided to give myself a reward, which is cooking a succulent meat meal for me. Haha, I am a lazy girl. Usually, my meal is simple, cooking the noodles or having microwave food for survival. Actually, my cooking is relatively fine if I would like to spend the time on it. A nice dinner really need me devote myself into cooking. The above things look likes hamburgers are Chinese hamburgers, which we call Rou Jia Mo. It is a Shaanxi specialty. Although it is not a Shanghai local cuisine, I quite missed it. It was my first time to do them with my friends in a complete series of step, which is quite successful. Eating only one Rou Jia Mo, I felt plenty full because of flour and the full of meat.