In week 3, the biggest news for all the Chinese who are current studying or working in the United Kingdom is that our president, Jinping Xi, took a visit to the Britain with her life, Liyuan Peng for 5 days (from October 19th to October 23rd ). I think it may be the only chance in my life to be so close with them. Wow, it is so exciting, isn’t it! Since in China, we cannot see our president easily even in a far distance. And the military parade is quite grand, especially with 41-gun salute. It sounds super cool. I have watched a military parade in normal scale once last year, and I was shocked. This time, it is for welcome ceremony, which must be more attractive. Bad news, I do not have day-off.  Good news, one of my friends went to London to welcome Dada Xi and Mama Peng(In China, we call our president, Xi Dada, and his wife, Mama Peng). I got the “live telecast”. 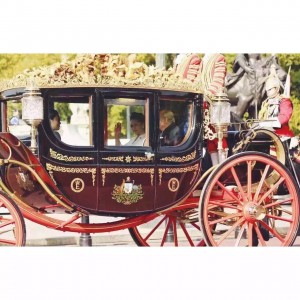 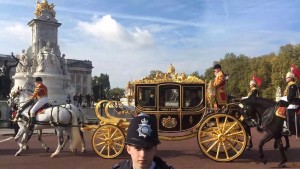 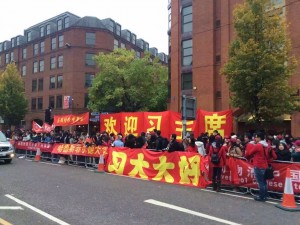 And on Friday, they came to Manchester and I followed their  steps. But, it was too crowed to see them clearly. The environment was exciting. The Five-Starred Red Flag can be seen everywhere.

And according the news, the interpreter ( a Chinese man) who works for Queen of Britain reigns had gained doctor’s degree from Lancaster University in 1990. And the person who did a speech in Chinese for  president Xi is also from Confucius Institute of Lancaster University. Wow, they are my schoolmates although we are in different department. So cool~ And people around me  (include me) guess in the future more Chinese students will come to UK, to Lancaster University.

For campus life, the lecturer of Ac.F 214 was changed in Week 3. I got one more Chinese lecturer. And I quite enjoy the style of his teaching. The lecture which lasts 2 hours becomes less boring. Luckily, he also is my seminar’s tutor.  In Week 4, the lecture of Ac.F 211 was told to change due to too many complaints. I felt a little bit sorry for him when I heard the news. A worse thing is at  the end of Week 4 the deadline of Ac.F 350 Game Theory Report comes, which was given before the summer holiday. I ignored it for whole summer vacation. So did my friends. I am not the only one, which makes me relieved a lot. It is my first time to prepare the financial report. I really do not have any idea about it. And during the preparation of the report, I was crazy and hope I do have a good result.

After handing in  the report, I feel the sky turns blue and everything becomes better.  And when I passed by the Reception, I was  shocked. The reception was decorated in Halloween style . So did the receptors. One receptor dressed up like a zombie and the other  like a witch, I guess. They were so friendly to let me take a photograph with them. Friday night must be party time, for celebrating  Halloween. My Halloween dressing-up is quite easy. I wear in a little different from the usual and put some blood at the edge of  mouth and eyes. And on Saturday, I went to see the movie, 007, with my friends, eating a large tub of popcorn. The film is OK, but it is not as good as we expect. The car showed in the film is super cool, which can spit fire and bouncing off the driver with the parachute, which I remember the most after seeing.