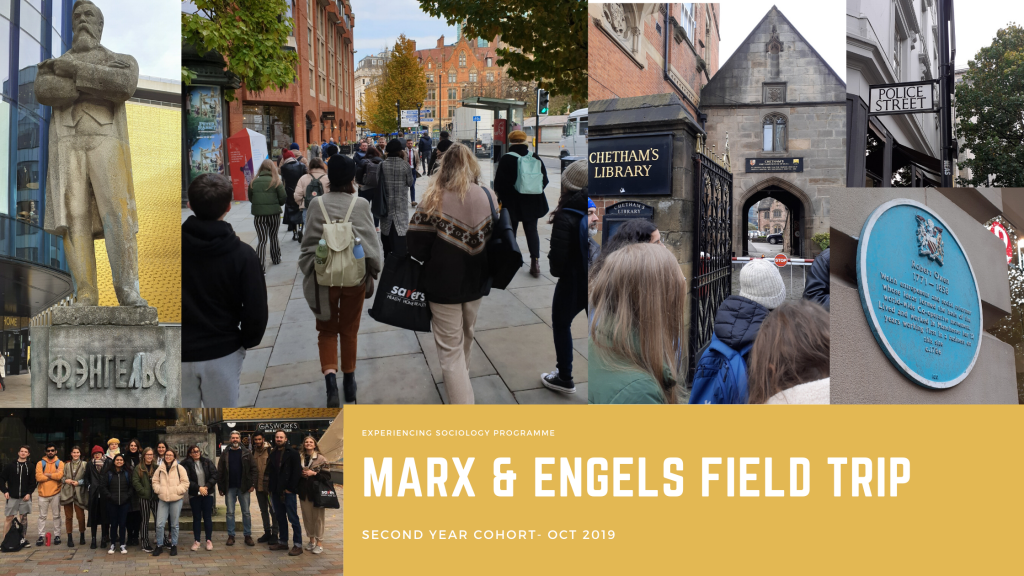 The new second year schedule of events got off to a great start with ESP’s first field trip.  Alongside staff and students from our SOCL200 module, we travelled to Manchester for a walking tour to learn more about the life and work of Marx and Engels.

Marx arrived in Manchester from Germany, and it is here that they conducted much of the research that fuelled their ideas about capitalism and society, resulting in some of the most influential books ever written, including The Condition of the Working Class in England.  The tour took us around key locations and sites of 19th century Manchester, helping us to see the city through the eyes of these early theorists.

We had a brilliant afternoon… in the words of those who came:

‘The history of Engels and Marx was brought alive. The descriptions were vivid enough to imagine Marx walking around’

‘The fieldtrip put Marx into his biographical, historical and political context, and it was fascinating to learn about his relationship with Engels’

‘[we learnt] new, exciting information on Marx’s background and biography’

“[The Experiencing Sociology Programme] has helped me to connect with other students who are studying sociology as a major.”

“[This programme] has helped me in many ways, including giving me more confidence and feeling part of the sociology department. (…) [I]f I had to award marks out of 10 it would be 10.”

“[The Experiencing Sociology Programme] allowed us to voice our concerns/worries (…) and the suggestions we made were listened to and resulted in [actual] changes. This interaction is very important to have as it means that ultimately our student voices are heard and responded to.”

“[The Experiencing Sociology Programme] has been very well tailored to our journey as first year students. I feel like every time I’m starting to feel overwhelmed by a new challenge the program is planned for that week, and I can ask the questions and get the answers I need whilst also doing a fun activity!”